God Is With You Every Day

Joshua 1:5    No man shall be able to stand before you all the days of your life. Just as I was with Moses, so I will be with you. I will not leave you or forsake you.

Matthew 28:20   Teaching them to observe all that I have commanded you. And behold, I am with you always, to the end of the age.”

Philippians 4:6-7     Do not be anxious about anything, but in everything by prayer and supplication with thanksgiving let your requests be made known to God. And the peace of God, which surpasses all understanding, will guard your hearts and your minds in Christ Jesus.

1 Samuel 17   God Was With David And Goliath Died

The Goliath narrative in 1 Samuel 17. … David hurls a stone from his sling and hits Goliath in the center of his forehead, Goliath falls on his face to the ground, and David cuts off his head. The Philistines flee and are pursued by the Israelites “as far as Gath and the gates of Ekron”.

48 As the Philistine moved closer to attack him, David ran quickly toward the battle line to meet him. 49 Reaching into his bag and taking out a stone, he slung it and struck the Philistine on the forehead. The stone sank into his forehead, and he fell facedown on the ground.

51 David ran and stood over him. He took hold of the Philistine’s sword and drew it from the sheath. After he killed him, he cut off his head with the sword.

When the Philistines saw that their hero was dead, they turned and ran.52 Then the men of Israel and Judah surged forward with a shout and pursued the Philistines to the entrance of Gath[f] and to the gates of Ekron. Their dead were strewn along the Shaaraim road to Gath and Ekron. 53 When the Israelites returned from chasing the Philistines, they plundered their camp.

Daniel in the Den of Lions

God Was With Daniel In The Lion’s Den, and he was not hurt. 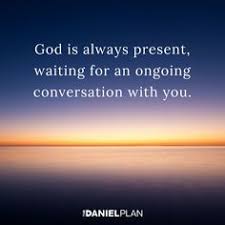 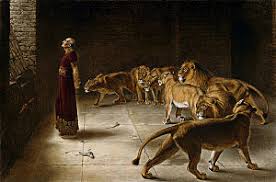 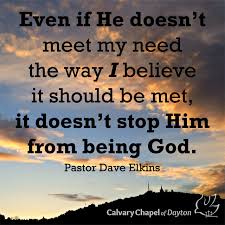 The story of Daniel in the lions’ den (chapter 6 in the Book of Daniel) tells how Daniel is
raised to high office by his royal master Darius the Mede, but jealous rivals trick Darius
into issuing a decree which condemns Daniel to death.
_____________________________________
The king who sentenced Daniel to prison was very sorry he was tricked in doing that. The
king was furious with the wicked men who tricked him and he threw the evil men into
the lion den for punishment for almost destroying Daniel who was innocent.

Daniel in the Den of Lions

16 So the king gave the order, and they brought Daniel and threw him into the lions’ den. The king said to Daniel, “May your God, whom you serve continually, rescue you!”

17 A stone was brought and placed over the mouth of the den, and the king sealed it with his own signet ring and with the rings of his nobles, so that Daniel’s situation might not be changed. 18 Then the king returned to his palace and spent the night without eating and without any entertainment being brought to him. And he could not sleep.

19 At the first light of dawn, the king got up and hurried to the lions’ den.20 When he came near the den, he called to Daniel in an anguished voice, “Daniel, servant of the living God, has your God, whom you serve continually, been able to rescue you from the lions?”

21 Daniel answered, “May the king live forever! 22 My God sent his angel,and he shut the mouths of the lions. They have not hurt me, because I was found innocent in his sight. Nor have I ever done any wrong before you, Your Majesty.”

23 The king was overjoyed and gave orders to lift Daniel out of the den. And when Daniel was lifted from the den, no wound was found on him, because he had trusted in his God.

God is with us every day. Amen