The classic World War II movie The Longest Day portrays one of the clever military strategies of the German army. After the Allies had taken the beaches of Normandy on D-Day, their orders were to assemble in the town of St. Mere-Eglise in France. When they saw the sign for St. Mere-Eglise, naturally they proceeded in that direction. There was only one problem: The Germans had turned the sign to point in the opposite direction.

Unknowingly, the Allied forces confidently followed the sign and started marching toward the German trap. The hero of the Allied forces, played by John Wayne, showed up just in time to rescue them from certain destruction. One glance at his compass told him they were heading for disaster. “Hey, where’s everybody going?” he shouted. “Am I the only one here with a compass? It’s east; it’s east. Somebody moved the sign!”

It’s an old trick, but in our spiritual lives Satan continues to use it against us with great success. He turns the signs pointing to ultimate victory and a great final destiny toward the defeating attitudes of fear, despair, and hopelessness. Jesus, on the eve of His death, wanted to prepare His friends for the battle ahead. He knew that the disciples would be confused and disoriented by the enemy, so He lovingly assured them of victory and pointed them toward their final destination, heaven. He’s done the same for us. He assures us that regardless of the forces that might come against us today, heaven is just ahead and the victory is ours!

Jesus won the victory on “D-Day” when He died on the cross for you! At that point it was His intention to set your heart on heaven. Keeping our eyes on heaven means that regardless of what we face, we know where we are headed. Heavenward travelers proceed with the confidence that all the difficulties of the journey are merely temporary and well worth the pain in light of the ultimate and eternal joy of our destination. But beware! Satan wants nothing more than to distract and disorient your heart. He craftily points the sign toward feelings of inadequacy and defeat. He masks the signs pointing to guilt and regret with slick invitations to seduction and compromise. In fact, many of his distractions claim that heaven is really the here and now if only you will engage in a little out-of-bounds pleasure or in living to increase your stacks of stuff. When we think we’ve got heaven here, the enemy has won the day. But it’s not too late to get back on track. Jesus holds the compass, and He knows that to follow Satan’s clever shifting of the sign is to walk right into the trap of Satan’s destruction. He knows the territory well and is calling us to follow Him all the way to heaven—the ultimate destination of eternal fulfillment and joy!

Hear Him shouting to your heart: “Hey, you’re going the wrong way! Follow me!” 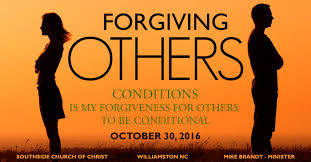 Catherine Marshall in her 1974 book, Something More, wrote a chapter titled “Forgiveness: The Aughts and the Anys.” The Chapter references Matthew 18:18. Reading this chapter was a game-changer in my life with respect to the relationship between answered prayer and forgiveness.

The chapter addresses our need as Christians to fulfill Christ’s expectation to forgive, period. Like many of us, Catherine Marshall admits to attaching conditions to her forgiveness. She says, “if the other person saw the error of his ways, was properly sorry, and admitted his guilt, then yes, as a Christian, I was obligated to forgive him.”

“And when ye stand praying, forgive, if ye have aught against any: that your Father also which is in heaven may forgive you your trespasses.” Mark 11:25(KJV)

“Any” meant anybody and everybody. Catherine Marshall’s commentary on this truth is fascinating as she unpacks the notion of our prayers being hindered by our un-forgiveness.

She references South African-born minister David du Plessis’ explanation of the Matthew 18 verse. He explains that when we hang on to judgment of another person, we bind that person to the very conditions we want to see changed. By our un-forgiveness, we stand between that person and the Holy Spirit’s work in convicting and ultimately helping him.

Dr. du Plessis says, “By stepping out of the way through releasing somebody from our judgment, we’re not necessarily saying, ‘He’s right and I’m wrong.’ Forgiveness means, ‘He can be as wrong as wrong can be, but I’ll not be the judge.’ Forgiveness means that I’m no longer binding a certain person on earth. It means withholding judgment.”

A Biblical example is from Acts 7 when Stephen was being stoned to death. Saul of Tarsus stood watching, holding the garments of the witnesses. The Bible tells us Stephen’s response to his attack is one of forgiveness,

Just two chapters later, Saul is on his way to Damascus when he encounters Jesus, and his world is turned upside down. Stephen, by releasing the group from his judgment stepped out of the way, therefore allowing the Holy Spirit to work.

After reading the “Aught Against Any” chapter, I applied this principle to my own life. Like Catherine Marshall, I systematically released my “aughts against all the anys” in my life, and the result was incredible. I have many examples, but I will share one involving one of our daughters. I realized I was holding on to resentment about decisions she was making while away at college. It was causing strain on our relationship. I tried talking to her. I prayed. I sought Godly counsel. Nothing worked. After reading this chapter, I confessed my judgment. I actually prayed the prayer Catherine Marshall suggested, “Lord, I release (name) from my judgment. Forgive me that I may have bound her and hampered Your work by judging. Now I step out of the way so that Heaven can go into action for (name).”

It wasn’t long before our daughter called to share she had met a few Christian friends and started attending a Bible Study. I watched her grow in her faith. Over time, our relationship healed. I did what was required of me as her mother. I loved her, and I prayed and released her.

Jesus tells us in John 16:8 that the Holy Spirit will convict the world of sin which was not and never was our job. Our job is to love and leave room for the Holy Spirit to work.

I encourage you to apply this principle in your life!

Watch and pray so that you will not fall into temptation (Matthew 26:41).

Go not, my friend, into the dangerous world without prayer. You kneel down at night to pray, drowsiness weighs down your eyelids; a hard day’s work is a kind of excuse, and you shorten your prayer, and resign yourself softly to repose. The morning breaks; and it may be you rise late, and so your early devotions are not done, or are done with irregular haste.

No watching unto prayer! Wakefulness once more omitted; and now is that reparable?

We solemnly believe not.

There has been that done which cannot be undone. You have given up your prayer, and you will suffer for it.

Temptation is before you, and you are not ready to meet it. There is a guilty feeling on the soul, and you linger at a distance from God. It is no marvel if that day in which you suffer drowsiness to interfere with prayer be a day in which you shrink from duty.

Moments of prayer intruded on by sloth cannot be made up. We may get experience, but we cannot get back the rich freshness and strength which were wrapped up in those moments.
-–Frederick W. Robertson

If Jesus, the strong Son of God, felt it necessary to rise before the breaking of the day to pour out His heart to God in prayer, how much more ought you to pray unto Him who is the Giver of every good and perfect gift, and who has promised all things necessary for our good.

What Jesus gathered into His life from His prayers we can never know; but this we do know, that the prayerless life is a powerless life. A prayerless life may be a noisy life, and fuss around a great deal; but such a life is far removed from Him who, by day and night, prayed to God.
-–Selected