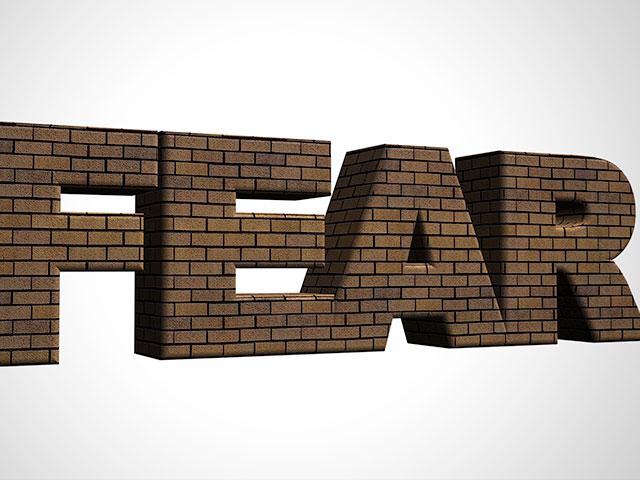 Black Bart, who robbed 29 Wells Fargo stagecoaches between 1875 and 1883, managed to strike fear in the hearts of his victims. Bart used his evil demeanor to ignite fear in anyone unfortunate to be on or around a Wells Fargo stagecoach during a robbery. Bart used fear to get his victims eyes on their circumstances. He knew distracting his victims from what was true was his only hope for a successful robbery and get away. The truth about Black Bart was in the 29 robberies history documents; he never once fired his gun or took a hostage. I wonder if the victims of his later robberies would have been as afraid, when robbed, if they had just set their mind on that truth. Like Black Bart, Satan uses fear as a tool to distract us from what is true.

Though we may lose sight of this, at times, God continues to prove Himself faithful in our lives. Remember when the Armenian army surrounded the Israelites camp? (2 Kings 6:15-17) A fear-struck servant came to Elisha with the disheartening news. However, Elisha assured the servant.

Elisha prayed and instantly the servant’s eyes were opened to see the hills, all around, covered with horses and chariots of fire. The truth was that God had provided the Israelites more than enough protection from the Armenians. Elisha’s eyes were on what was true while the servant’s gaze had been distracted by the surrounding enemy. I wonder if the servant would have seen God’s army from the start had he not allowed the enemy to distract him from what was true.

Though, in Christ, I am more than a conqueror (Romans 8:37), on occasion, I allow intimidating circumstances distract me from this truth, and I submit to fear. Just as the turbulent waves of the sea distracted Peter from Jesus’ invitation to walk on water, causing Peter to be consumed by the waves, when I focus on the waves in my life, overwhelming feelings of helplessness rob me of doing the impossible through Christ. Like Peter, when I fix my eyes on Jesus I am able to confidently rise above my fears and miraculously walk to Jesus, by faith, on what previously were my fears.

All throughout the Bible, God instructs people to not fear. Though we may feel sometimes this is easier said than done, it is no coincidence that when you add up all the instances in Scripture where it instructs, “do not fear,” “fear not,” and “be not afraid” they total 365 occurrences — one occurrence for every day of the year. Perhaps this is God’s way of telling us we will never face a day that we will have a valid reason to be afraid. May our faith in Jesus shine so bright, extinguishing all ungodly fears, that those who don’t know Jesus will marvel at our boldness and know, as the Sanhedrin did after witnessing the boldness of Peter and John, that we have been with Jesus. (Acts 4:5-13)

“The LORD is my light and my salvation; whom shall I fear? The LORD is the defense of my life; whom shall I dread? When evildoers came upon me to devour my flesh, my adversaries and my enemies, they stumbled and fell. Though a host encamp against me, my heart will not fear; though war arise against me, in spite of this I shall be confident.” – Psalm 27:1-3 NASB

David had many opportunities to be afraid. As a boy, he faced attacks from wild animals. As a young man, he confronted the giant, Goliath, and the armies of Israel’s enemies.

Then David faced the wrath of King Saul, who came to view him as a rival to be eliminated. But, in every situation, David found that he could trust in the Lord and that this trust took away his fears.

There are many reasons why each of us might experience fear. We can be afraid because of the situations we face or the forces that are coming against us. We might feel overwhelmed or unsure of what to do. We might be asked to do something that is difficult. Yet, as David learned, we can be delivered from fear by focusing and depending on the Lord.

David declared that he realized God was his light and salvation. This means that the Lord gives us the right perspective on life. We don’t need to fear wars or opposition, personal problems or uncertainties. We don’t need to be afraid if we make mistakes, have weaknesses, or don’t know what to do.

As we trust in the Lord, He will light our path and provide everything we need. If we focus on Him instead of on our problems, He will give us strength and take away our fears.

Is there any fear in your life? Look to God. Meditate on His promises and confess them as true.

Trust in Him. Let Him be your light and salvation. Make Him your stronghold. You can be safe and secure in Him.

Therefore, strengthen your listless hands and your weak knees, and make straight paths for your feet, so that what is lame may not be put out of joint but be healed. (Heb 12:12-13)

This is God’s word of encouragement to us to lift up the hands of faith, and confirm the knees of prayer. Often our faith grows tired, languid, and relaxed, and our prayers lose their force and effectiveness.

The figure used here is a very striking one. The idea seems to be that we become discouraged and so timid that a little obstacle depresses and frightens us, and we are tempted to walk around it, and not face it: to take the easier way.

Perhaps it is some physical trouble that God is ready to heal, but the exertion is hard, or it is easier to secure some human help, or walk around in some other way.

There are many ways of walking around emergencies instead of going straight through them. How often we come up against something that appalls us, and we want to evade the issue with the excuse:

“I am not quite ready for that now.” Some sacrifice is to be made, some obedience demanded, some Jericho to be taken, some soul that we have not the courage to claim and carry through, some prayer that is hanging fire, or perhaps some physical trouble that is half healed and we are walking around it.

God says, “Lift up the hands that hang down.” March straight through the flood, and lo, the waters will divide, the Red Sea will open, the Jordan will part, and the Lord will lead you through to victory.

Don’t let your feet “be turned out of the way,” but let your body “be healed,” your faith strengthened. Go right ahead and leave no Jericho behind you unconquered and no place where Satan can say that he was too much for you. This is a profitable lesson and an intensely practical one. How often have we been in that place. Perhaps you are there today. ”
—A. B. Simpson

Pay as little attention to discouragement as possible. Plough ahead as a steamer does, rough or smooth—rain or shine. To carry your cargo and make your port is the point.
—Maltbie D. Babcock