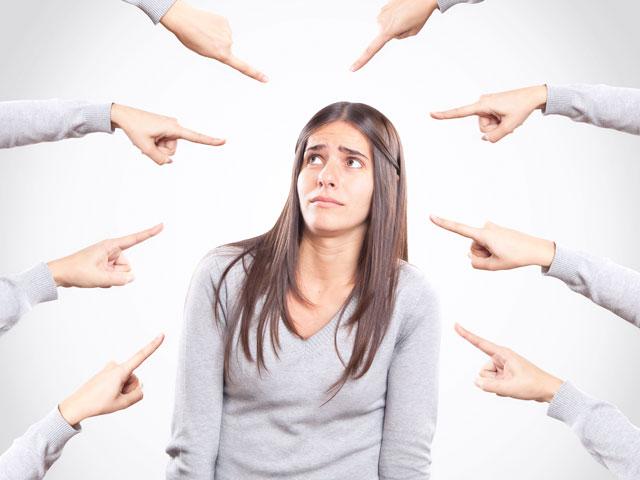 When I think about the many years I spent beating myself up for just about everything, I want to cringe. For years, I marched to the drumbeat of voices in my head telling me: “I’m not good enough. I’m a terrible person because I have terrible thoughts. God would not love me because of the choices I made. God could not forgive me because of the things I had done.”

On and on the self-condemnation went. I believed God loved others, but I simply could not believe He loved me.

As a follower of Jesus Christ, I understood I had an enemy. I knew his name. What I did not quite comprehend was the accusations I heard loud and clear were essentially from my enemy. Satan must have been delighted knowing one of God’s Covenant daughters was being consumed daily by the weight of a self-imposed guilty verdict.

In the Matthew 22:23-32 passage, Jesus was speaking to the Sadducees about resurrection and the afterlife. The Sadducees were trying to trap Jesus. They didn’t quite understand whom they were talking to. Jesus’ point was appropriate for my situation. How many times do we believe the loud and lying voices we hear in our head? How many times do we worry or fear or fret because we either don’t know or don’t believe in God’s power?

God gave us His Word. He sent His son Jesus Christ to die for our sins. He made covenants and promises, but if we don’t get to know Him by spending time with Him or in His word, we may live out our lives believing lies.

Things began to change for me when I met a more mature Christian sister. She walked alongside me and encouraged me to get to know God personally by studying His word. The more I studied, the more my eyes opened to truths.

I was overjoyed when I learned the truth of what God thinks about me.

I am “His beloved daughter in whom He is well pleased,” Matthew 3:17 (NLT)

As the “apple of His eye,” I am greatly cherished and thoroughly protected.

I found new freedom when I learned “there is no condemnation to those who are in Christ Jesus…” Romans 8:1 (NKJV)

Over time I learned my battles were not “of flesh and blood,” and I must fight with the weapons of God’s word!

When I was assaulted with a reminder of some sin, I responded to the thought with, “yes, that is true, but the Blood of my Savior Jesus Christ redeemed me, and He told me in Isaiah 43:25, …”

“I–yes, I alone–will blot out your sins for my own sake and will never think of them again.” (NLT)

I witnessed “when my enemy came in like a flood, the Spirit of the Lord raised up a standard against it.” Isaiah 59:19 (NKJV)

When voices try to tell me, I am unworthy or unwanted, I now say, No! I reject that thought! I remember the truth,

“Even before God made the world, God loved me and chose me … and decided in advance to adopt me into his own family through Jesus Christ … and it gave Him great pleasure.” Ephesians 1:4,5 (NLT)

Matthew 22: 33  The Sadducee’s question Jesus about life after death.

This story line would make some sense in a variety of cultures. Levirate marriage (Deut 25:5-6; compare Gen 38:8-26) and widow inheritance (see Belkin 1970; as in Ruth 3:12-13) perpetuate the name of the deceased and serve to provide for widows in many traditional societies where women cannot earn sufficient wages for sustenance (for example, Mbiti 1970:188-89). Yet many ancient hearers would assume a woman who had outlived seven husbands was dangerous (Mart. Epig. 9.15; t. Sabbat 15:8). The Sadducees borrow the story line of a woman with seven husbands from the popular Jewish folktale in Tobit 3:8; they want to illustrate the impossible dilemmas they believe the doctrine of resurrection creates.

The Sadducees were known for their opposition to the doctrine of the resurrection (Acts 23:6-8; perhaps Jos. Ant. 18.16; War 2.164-65). When Jesus declares that they deny the power of God (compare 2 Thess 3:5), he may evoke the traditional Jewish view that God expresses his power most visibly in the resurrection of the dead, a view attested in the second of the regularly prayed Eighteen Benedictions (abbreviated as “Power”; compare m. Ros Hassana 4:5; see also Rom 1:4).

Early Jewish teachers regularly argued apart from the Bible with Gentiles or scoffers, but from Scripture for those who knew Scripture (Moore 1971:2:381). When debating the views of Sadducees who doubted the resurrection and demanded proof from the law of Moses, later rabbis found ample proof for this doctrine in the Bible’s first five books (Sipre Deut. 329.2.1; b. Sanhedrin 90b). One later rabbi went so far as to say that all texts implied the resurrection if one simply had the ingenuity to find it (Moore 1971:2:383; Sipre Deut.306.28.3); however, this often meant reading it into the text! As an expert Scripture interpreter, Jesus here exposes his opponents’ lack of Scripture knowledge with his standard formula, have you not read . . . ? (v. 31; see 12:3; 19:4; 21:42, 46).

Jesus may be arguing for God’s continuing purposes with an individual after death, which for many Palestinian Jews would imply ultimate resurrection. He implies that God would not claim to be the God of someone who no longer existed (compare Doeve 1954:106; Longenecker 1975:68-69); he also evokes God’s covenant faithfulness to his people, which Palestinian Jewish prayers regularly associated with the “God of the fathers,” Abraham, Isaac and Jacob (Jeremias 1971:187). If God was still God of Abraham, Isaac and Jacob, and if his power was unlimited, then he would ultimately fulfill his promise to them-not only corporately through their descendants, but personally to them. The crowds are again astounded by Jesus’ quick wit (compare 7:28; 22:22), just as they are by his signs (8:27; 9:8; 12:23).

This morning we continue our study of Matthew 22 and come to the second of three questions posed to Jesus in His confrontation with the Jewish religious leaders. The Chief Priests and Elders began the day by challenging Jesus’ authority to do all the things He has done, including cleansing the temple from the merchants and money changers as well as teach with such authority and perform so many miracles. Jesus’ responded with three scathing parables that demonstrated the wicked hearts of these men. They feigned to be followers after God and the teachers of righteousness, but in fact were followers only of themselves and the teachers of self-righteousness. They were not only the blind leading the blind, but rebellious too in killing the prophets of God throughout the ages past and currently plotting how they might destroy God’s Son.

Previously we saw the Pharisees attempt to discredit Jesus by sending their disciples, along with the Herodians, (See: The Secular and the Sacred) to pose a question that was sure to get Jesus in trouble with either the people or the Romans. “Is it lawful to pay the poll-Tax?” If Jesus says, “yes,” the people will reject Him for they despised the poll-tax. If Jesus says, “no,” the Herodians would accuse Him of insurrection against Rome. They thought they could entrap Jesus, but you can not trap God. Jesus answer not only astounded them, but clarified for all of us the relationship we have with human government and God.

“Render to Caesar the things that are Caesar’s and to God the things that are God’s.” To Caesar belongs submission, civil honor and taxes for that is His due. It is God that sets up human governments for the restraint of evil and so it is only fitting that the people pay for the benefits received and follow the laws set up. The power of God is seen in that He can even use wicked people and systems of government for His own purposes. However, we are not to give to human governments that which does not belong to it. Our obedience is not necessary when it commands us to do or not do things contrary to God’s commands. We can not submit to laws that command us to do evil or prohibit us from walking in righteousness. We submit to human government, but our allegiance is only to God Himself. Jesus’ response was a double edged sword to the Pharisees because they did not want to submit to the government nor was their allegiance to God.

We must be mindful ourselves to make sure we understand the Scripture’s command in this area. Christians should be the best citizens of any country having the greatest patriotism and love for their nation and be even willing to lay down their lives for its preservation. They should be among the greatest supporters of the government by obeying its laws and defending its right to exist and rule since they understand that those rights and authority come from God Himself. At the same time, Christians should be the most independent force within any nation because their allegiance is not to man, but God. Their true citizenship is in heaven and they are more than willing to suffer whatever may come in order to promote godliness within that nation.

How does such a thing work out in our own country? We pay our taxes without grumbling, we obey the laws that have been set forth, but at the same time we work hard to promote laws that reflect Godliness and repeal laws that do not. We give to those holding government offices the proper honor and respect do them as those in authority, while at the same time we boldly speak out for righteousness and will even rebuke those in authority as needed, but always speaking the truth in love (And remember, love can be bold as was Nathan to David). Obviously President Clinton is not popular with Christians because he has so openly promoted that which the Bible calls evil. We know were the policies he is promoting will lead us and our children and that causes fear and anger to well up inside us. But how do we react? If we descend into name calling and vilification of the man we are not following the Scriptures commands and so are no better than he. Do we pray for his soul and the salvation of those in his administration? Do we focus on the issues and show to people how and why Biblical principles should be applied, or do we regress into accusations. Do we promote godliness in what we do, and how we present our views or do we become simply another demonstration of the degenerate nature of man. Fulfill your duty to pay Caesar what belongs to him, but even more importantly, fulfill your responsibility to obey God first and foremost in everything.