2  The people kwho walked in darkness

have seen a great light;

those who dwelt in a land of ldeep darkness,

on them has light shone.

have seen a great light,

and for those dwelling in the region and wshadow of death,

on them a light has dawned.”

18 rto open their eyes, so that they may turn from darkness to light and from sthe power of Satan to God, that they may receive tforgiveness of sins and ua place among those who are sanctified vby faith in me.’

I Am the Light of the World

12 lAgain Jesus spoke to them, saying, m“I am the light of the world. Whoevernfollows me will not owalk in darkness, but will have the light of life.”

When the Lights Go Out 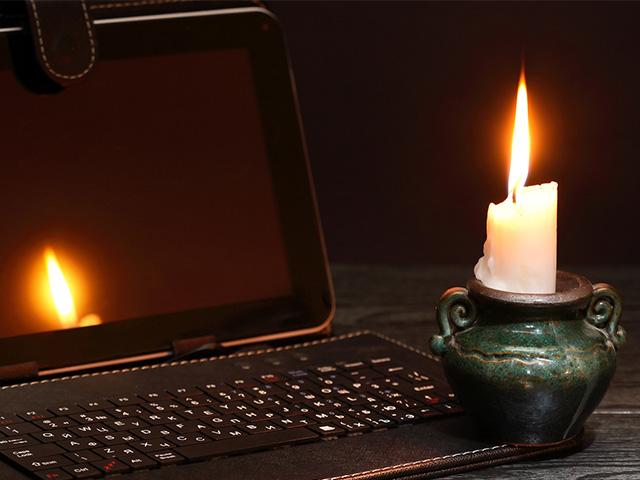 It was Friday night, we’d gone out for dinner and barely made it back into the garage before the downpour.

When the power went off, I was writing at my computer and my wife was reading an e-book on her tablet. The plan was to watch a movie a little later, but there we were with no electricity, no lights, no internet, and no television.

I reached into the desk drawer for the flashlight that doubles as a cell phone power source, plugged in my phone, and turned on the mobile hotspot so we could maintain internet connection. Then I walked over to the kitchen pantry where we keep two battery-operated camping lanterns, pulled one out, and placed it on the kitchen counter, where its light sprayed throughout the kitchen, dining room, and living room. Not a lot, but enough.

For the next hour, rain poured from the sky as if God had picked up the Atlantic Ocean and was dumping it on us. Linda took the lantern over to the couch to read; my laptop had plenty of charge for me to finish the work I was doing.

Although the rest of the house was dark, and the temperature grew warmer because the air conditioner was off, we didn’t have a crisis when the lights went out. During the previous weekend, we had checked the batteries in those emergency lamps and charged my mobile power back-up. Because we were ready, there was no emergency when the storm caused a blackout. We didn’t panic and there wasn’t a crisis.

The same can be true if something terrible happens and life itself comes to an end. If we’ve taken time to prepare in advance, even death isn’t a crisis, and we don’t have to panic.

In Philippians 1:21 the Apostle writes, “to live is Christ, and to die is gain.” That doesn’t sound like a man who is afraid of the dark or of death. He was prepared for whatever might happen.

Job is another who had a deep confidence when facing the storms of life. Despite all the pain and ugliness that he faced, he still declared, “I know that my Redeemer lives.” Job 19:25

When the lights finally came back on, we watched an old Alfred Hitchcock movie starring James Stewart and Doris Day. It was a lovely evening—despite the storm raging on the outside.

A score of years ago, a friend placed in my hand a book called True Peace. It was an old mediaeval message, and it had but one thought–that God was waiting in the depths of my being to talk to me if I would only get still enough to hear His voice.

I thought this would be a very easy matter, and so began to get still. But I had no sooner commenced than a perfect pandemonium of voices reached my ears, a thousand clamoring notes from without and within, until I could hear nothing but their noise and din. Some were my own voices, my own questions, some my very prayers. Others were suggestions of the tempter and the voices from the world’s turmoil.

And as I listened, and slowly learned to obey, and shut my ears to every sound, I found after a while that when the other voices ceased, or I ceased to hear them, there was a still small voice in the depths of my being that began to speak with an inexpressible tenderness, power and comfort.

As I listened, it became to me the voice of prayer, the voice of wisdom, the voice of duty, and I did not need to think so hard, or pray so hard, or trust so hard; but that “still small voice” of the Holy Spirit in my heart was God’s prayer in my secret soul, was God’s answer to all my questions, was God’s life and strength for soul and body, and became the substance of all knowledge, and all prayer and all blessing: for it was the living GOD Himself as my life, my all.

It is thus that our spirit drinks in the life of our risen Lord, and we go forth to life’s conflicts and duties like a flower that has drunk in, through the shades of night, the cool and crystal drops of dew. But as dew never falls on a stormy night, go the dews of His grace never come to the restless soul.
–A. B. Simpson

“Verily he took not on him the nature of angels; but he took on him the seed of Abraham.” Hebrews 2:16

Adam broke the covenant of works; he touched the accursed fruit, and in that day he fell. Ah! What a fall was there! Then you, and I, and all of us fell down, while cursed sin triumphed over us; there were no men that stood; there were some angels that stood, but no men, for the fall of Adam was the fall of our entire race. After one portion of the angels had fallen, it pleased God to stamp their doom, and make it fast and firm; but when man fell, it did not so please God; he had threatened to punish him, but in his infinite mercy he made some the object of his special affection, for whom he provided a precious remedy, and secured it by the blood of his everlasting Son. These are the persons whom we call the elect; and those whom he has left to perish, perish on account of their own sins, most justly, to the praise of his glorious justice. Now, here you notice divine sovereignty; sovereignty, that God chose to put both men and angels on the footing of their free-will, sovereignty, in that he chose to punish all the fallen angels with utter destruction; sovereignty, in that he chose to reprieve, and grant an eternal pardon to a number, whom no man can number, selected out of men, who shall infallibly be found before his right hand above. My text mentions this great fact, for when properly translated it reads thus:- “He took not up angels, but he took on him the seed of Abraham.”

For meditation: The Lord Jesus Christ witnessed Satan’s expulsion from Heaven, and as surely guarantees the believer’s entrance into Heaven (Luke 10:18,20).

Keep your lives free from the love of money and be content with what you have, because God has said, “Never will I leave you; never will I forsake you.”
Hebrews 13:5
DailyVerses.net