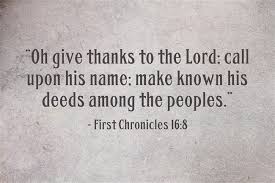 “For He has looked down from the height of His sanctuary; from Heaven did the LORD behold the earth, to hear the groaning of the prisoner, to loose those that are appointed to death; to declare the name of the LORD in Zion,and His praise in Jerusalem; when the people are gathered together, and the kingdoms, to serve the LORD.”Psalm 102:19-22.

I SUPPOSE the first sense of this passage would be just this. Israel had been carried away captive and only the poorest of the people had been left in the land. Jerusalem was a heap. Zion had been plowed with the plow of desolation. The whole country was, compared with its former state, like a desert. But in due time, God, who had peculiar favor towards His people, though He had sorely smitten them, would look down upon them. From the height of His sanctuary in Heaven, He would look down upon the ruins of His sanctuary on earth. From His heavenly city above, He would look down upon His earthly city below. And as He looked and listened, He would be attracted by the moans of His people, and especially of some who were appointed to death, or, as the margin renders it, “the children of death.” Upon these He would look with tender pity and, in due time He would so come to the deliverance of His scattered people, Israel, and bring them back to their own land and work for them such wonderful mercy that, ever afterwards that deliverance would be spoken of with praise and thanksgiving! Even in the last days when all nations shall serve the Lord, the memory of this deliverance shall not be forgotten! Still shall it be the theme of joyous song and the subject of holy contemplation, just as when Israel was in Egypt, the Lord heard their groaning and with a high hand and a stretched-out arm brought them up out of the land of bondage–and ever afterwards among the sweetest patriotic songs of the nation was the one which Moses and Miriam sang on the further shore of the Red Sea–“Sing you to the Lord, for He has triumphed gloriously; the horse and his rider has He thrown into the sea.” And all along Jewish history, whatever of her songs there may have been, that one has never gone into oblivion. And even in Heaven, itself, “they sing the song of Moses, the servant of God, and the song of the Lamb.” So that the deliverance promised here to Israel was to be as noteworthy as that which was given at the Red Sea and it was to be forever kept in memory by the Lord’s chosen people!

Now I am going to leave the more immediate sense of our text, yet still give you its meaning. It has been said that if a great crystal is broken into the smallest fragments, each piece will still be crystallized in the same form and, in like manner, the dealings of God with His Church, as a whole, will be found to be of the same kind as His dealings with the various parts of His Church and also with individuals. And in dealing with individuals, each separate act of God will have about it the same attributes and be of the same character as His dealings on a large scale with the whole of His people. So, if we break down the great Truth of the text, which is like a mass of bread, into small crumbs so that each one of the Lord’s children may have a portion, it will still be bread! The Truth of God will be the same as we try to bring it home to individual experience–and that we shall now try to do. May the eternal Spirit, the Comforter, help us in the doing of it!

A few years ago, I started a gratitude journal. It was tiny, fit in my pocket, and I took it with me everywhere. Throughout the day, I would take a few seconds to jot down little things I was grateful for, with the aim of getting to 1,000. It was such a simple practice, but it started to make such a big impact on my life and my attitude.

These little notes became little prayers to God throughout the day, each one expressing thankfulness for the many blessings he was showering on me. Some were significant and deeply meaningful, like a powerful prayer from a close friend or a breakthrough in a dark season, but some were as small as a smile from a stranger or a butterfly landing nearby. All helped me pause and praise God.

Here’s my advice to us all: Just try to slow down a little today. Keep your eyes open. Look around you, look up, look into the eyes of the people you pass, look at the grass growing or the flowers blooming or the autumn leaves falling. Take time to notice and appreciate the beauty of the world around you, and take a few extra minutes to write it all down. You’ll be surprised how gratitude can change your whole perspective on life and give you reason upon reason to praise the Creator of it all.

“O Come, let us sing for joy to the Lord; Let us shout joyfully to the rock of our salvation. Let us come into his presence with thanksgiving; let us make a joyful noise to him with songs of praise! For the Lord is a great God, and a great King above all gods.”  Ps. 95:1-3

“Enter his gates with thanksgiving, and his courts with praise! Give thanks to him; bless his name! For the Lord is good; his steadfast love endures forever, and his faithfulness to all generations.” Ps. 100:4-5

“I will give thanks to you, LORD, with all my heart; I will tell of all your wonderful deeds.” Ps. 9:1

“I will give to the Lord the thanks due to his righteousness, and I will sing praise to the name of the Lord, the Most High.” Ps. 7:17.

A Prayer for a Heart of Thanksgiving

Lord, teach me to offer you a heart of thanksgiving and praise in all my daily experiences of life. Teach me to be joyful always, to pray continually and to give thanks in all my circumstances. I accept them as Your will for my life (1 Thessalonians 5:16-18). I long to bring pleasure to Your heart daily. Break the power of the enemy in my life. Defeat Him through my sacrifice of praise. Change my outlook and attitude into one of joyful contentment with my present circumstances. I thank You for… [Name a difficult circumstance in your life presently and thank God for it.] Amen.

A Prayer for a Thankful Heart

Jesus, I want to be like You who obeyed the Father without complaint. You embraced the chains of humanity when You walked this earth. Convict me whenever I complain or compare myself with others. Give me Your attitude of humility and thankful acceptance. I want to be like the Apostle Paul who learned contentment in every circumstance. I choose to continually offer You a sacrifice of praise, the fruit of lips that give praise to Your name (Hebrews 13:15). I long to bring a smile to Your face. Teach me the power of a thankful heart. I know that Your truth dwells in a thankful heart.

Paul’s epistle to the Romans sheds light on what we mean when we say that grace is unmerit. In 1:18–3:20, the Apostle explains that on the final day, for the first time in our lives, we will be judged in total perfection, in total fairness, in absolute righteousness. Thus, every mouth will be stopped when we stand before the tribunal of God. This should provoke fear in the hearts of fallen people, as condemnation is the only possible sentence for sinful men and women: “All have sinned and fall short of the glory of God” (3:23).

But those who trust in Christ Jesus have hope, for if we are in Him by faith, we have been “justified freely by His grace.” Note that justification is accomplished not by obligation, but freely through grace on account of the redemption purchased by Jesus alone. There’s no room for boasting, for we are justified not by our works but by grace alone through faith alone. Paul goes on to cite Abraham as the preeminent example of one who was justified by faith alone and therefore free from God’s sentence of condemnation. If the basis for Abraham’s salvation, his justification, was something that Abraham did—some good deed, some meritorious service that he performed, some obligation that he performed—if it were on the basis of works, Paul says, he would have had something about which to boast. But Abraham had no such merit. All he had was faith, and that faith itself was a gift: “Abraham believed God, and it was counted to him as righteousness” (4:3; see Eph. 2:8–10).

Now to the one who works, his wages are not counted as a gift but as his due. And to the one who does not work but believes in him who justifies the ungodly, his faith is counted as righteousness, just as David also speaks of the blessing of the one to whom God counts righteousness apart from works: “Blessed are those whose lawless deeds are forgiven, and whose sins are covered; blessed is the man against whom the Lord will not count his sin.”

That’s grace. Paul couldn’t say it any other way. To him who works, it’s debt; if you merit something, it means that someone is obligated to pay you. If I hire you as an employee and promise to pay you one hundred dollars if you work eight hours, I must pay you for working the eight hours. I’m not doing you a favor or giving you grace. You’ve earned your pay. You’ve fulfilled the contract, and I’m morally obliged to give you your wages.

With respect to the Lord, we are debtors who cannot pay. That’s why the Bible speaks of redemption in economic language—we were bought with a price (1 Cor. 6:20). Only someone else—Christ—can pay our debt. That’s grace. It’s not our good works that secure our rescue but only the works of Christ. It’s His merit, not ours. We don’t merit anything. He grants us His merit by grace, and we receive it only by faith. The essence of grace is its voluntary free bestowal. As soon as it’s a requirement, it’s no longer grace.

Grace should never cease to amaze us. God has an absolute, pure, holy standard of justice. That’s why we cling with all our might to the merit of Jesus Christ. He alone has the merit to satisfy the demands of God’s justice, and He gives it freely to us. We haven’t merited it. There’s nothing in us that elicits the Lord’s favor that leads to our justification. It’s pure grace.

When we truly understand grace—when we see that God only owes us wrath but has provided Christ’s merit to cover our demerit—then everything changes. The Christian motivation for ethics is not merely to obey some abstract law or a list of rules; rather, our response is provoked by gratitude. Jesus understood that when He said, “If you love Me, keep My commandments.” If I may have the liberty to paraphrase: “Keep My commandments not because you want to be just, but because you love Me.” A true understanding of grace—of God’s unmerited favor—always provokes a life of gratitude and obedience.

Let no debt remain outstanding, except the continuing debt to love one another, for whoever loves others has fulfilled the law.
Romans 13:8
DailyVerses.net

And so we know and rely on the love God has for us. God is love. Whoever lives in love lives in God, and God in them.
1 John 4:16
DailyVerses.net