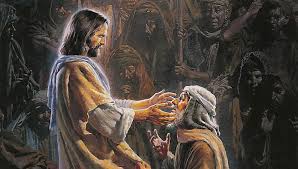 The title of my devotional today strikes me as oxymoronic. Miracles, after all, are defined as acts of God, amazing and marvelous events, and “seals of a divine mission” (Easton’s 1897 Bible Dictionary). Generally speaking, there’s nothing small about them.

What I’m talking about, then, are instances of heavenly intervention in the lives of believers that impact what we would consider “minor” areas of our existence, the things that cause us to make statements like: “It showed me that God cares about even the small things in our lives,” always as if that’s a profoundly shocking proclamation. Nobody ever responds by saying, “Well, duh…”

I think that’s because it never stops being a mind-blowing concept – the Creator of the universe, who hears the prayers and praises of billions simultaneously and loves each one the same, provided, perhaps, just the right amount of money for a struggling single mom to buy her child a pair of shoes. It’s not the parting of the Red Sea to preserve for Himself a people, or the resurrection of His son to purchase the redemption of humanity. It’s, for lack of a better term, a mini-miracle.

I remember one time in our Adult Bible Fellowship class my friend Karen stepped in to teach our continuing series in Mark’s gospel. We were in Chapter Six, focusing primarily on the Feeding of the 5,000. As she began her lesson, Karen admitted that she’d never quite been able to visualize this scene, or understand exactly what the miracle was meant to show. I mean, there is the lesson of provision, but the human body can go without food for quite some time. Jesus Himself fasted in the wilderness for 40 days (Matthew 4:1-4). So it’s not like life and death were hanging in the balance if the people who had followed Him to this “desolate place” went without dinner that night.

It could be, Karen suggested, that Jesus just didn’t want the people to go away; He had just suffered the death of His cousin John the Baptist, and recently endured the “amazing unbelief” (Mark 6:6) of those from His hometown of Nazareth. It could be Jesus took immense delight in this multitude foregoing their bodily needs to attend to His Word. It very well could be our Lord simply wanted to do something “just for them.”

Maybe, Karen said, that’s why she always tended to overlook this miracle a little bit. “You know how sometimes when God does something that you know was ‘just for you,’ and you tell someone else about it, and they’re like, ‘That’s cool and all,’ but it just doesn’t carry the same meaning for them?”

I knew exactly what that was like, and I liked where she was going. I could see an even greater personalization in mini-miracles, in God drawing delight from blessing our socks off in ways that speak to our individual hearts. The idea also gave me greater permission to attribute to the Lord all sorts of transpirings that I had chalked up to my own efforts, happenstance, or even worse, had gone without noticing.

If, for instance, I told you about the time we thought we’d lost my wife’s keys – including several costly ones – only to find them sitting precariously on a single steel beam of the auto transport behind our moving van, maybe you’d respond the way my friend Scott did: “You got lucky, dude.” Yeah, well, I guess that’s why Karen says sometimes these events are “just for us.” I saw those keys, I knew the bumpy route and wet weather we had traveled, I was astounded, I was humbled. I decided that giving credit to the Lord for things that bless you is never wrong, as suggested by James 1:17.

Slow Down and Meditate On Jesus’ Miracles

A takeaway is that we should slow down in our reading, and when we finish reading about a miracle, we ought to pause and say, “Jesus, show me what this is saying about you.” Fall down, worship him, and let it have its humbling and strengthening effect. I have a Christ who not only feeds 5,000 but also gives twelve baskets to the twelve men who were distributing it. That is just huge.

Piper: “When we finish reading a miracle, we ought to pause and say, ‘Jesus, show me what this is saying about you.'”

In other words, Jesus is saying, “I will take care of all your needs.” I think, frankly, that is the essence of what they missed. For the disciples, the point of the feeding of the 5,000 was the twelve full baskets left over. Through his miracle, Jesus is saying that if you go ahead and give away what you don’t have, you are still going to get everything you need.

Again, the takeaway is: slow down and meditate. Nothing that I have said here demands any scholarly training. You don’t need to know Greek. You don’t even need to go to seminary. You just need to slow down and pray and think and worship over the miracles of Jesus.

Your God will come. . . . Then will the eyes of the blind be opened and the ears of the deaf unstopped. Then will the lame leap like a deer, and the mute tongue shout for joy. — Isaiah 35:4-6

To assure John’s disciples, Jesus quoted phrases from Isaiah 35, emphasizing that he clearly showed the mighty signs of God’s coming kingdom, and that he had come as the Savior.

Jesus is still among us to open our eyes and unstop our ears so that we can leap in gratitude and shout for joy. God still does miracles today. We just need to open our eyes to the wonder of creation. We need to unstop our ears to the wonderful testimonies of believers about God’s healing. We need to leap for joy that our sins are forgiven and shout this good news for others to hear.

“And it came to pass on a certain day, as he was teaching, that there were Pharisees and doctors of the law sitting by, which were come out of every town of Galilee, and Judaea, and Jerusalem: and the power of the Lord was present to heal them.” — Luke 5:17.

LUKE, the writer of this gospel, was a physician, and therefore had a quick eye for cases of disease and instances of cure; you can trace throughout the whole of his gospel the hand of one who was skilled in surgery and medicine. From which I gather that whatever may be our calling, or in whatever art or science we may have attained proficiency, we should take care to use our knowledge for Christ; and that if we be called being physicians we may understand the work of the Lord Jesus all the better by what we see in our own work, and we may also do much for our Lord in real substantial usefulness among our patients. Let no man despise his calling; whatever instrument of usefulness God hath put into thine hand, consider that the Great Captain knew what weapon it were best for thee to wield. Covet not thy neighbour’s sword or spear, but use that which thy Lord hath given thee, and go forth to the battle of life to serve according to thy capacity. If thou be placed in this corner of the vineyard or that, consider that thou art in the best place for thyself, and the best place for thy Master; and do not always be judging what thy fellow servants ought to do in their place, nor what thou couldst do if thou wert in another place; but see what it is that thou canst do where thou art, and use such things as thou hast in glorifying thy Lord and Master. One is pleased to observe in the language of a true man how the man’s self shows itself. David frequently sings like one who had been a shepherd boy, and though a king he is not ashamed to own that he once grasped the crook. There is a manifest difference between the prophecies of Amos the herdsman and of Isaiah the royal seer. True men do not imitate one another, but each one, moved of God, speaketh according to his native bias, and according to the circumstances in which Providence has cast him. It was destructive to Egyptian art when the great men of the land framed articles of taste, and laws of statuary and of painting by which every sculptor must be bound, for then everything like freshness and originality was driven away; the proportions of every colossal statue and of every figure upon the wall were rigidly fixed, and then the glory and excellence of art vanished from the land. To do the same in religion is even more unwise; to say, “Ye shall all speak after one fashion, and ye all shall conform to this manner of talk and life,” is folly at its height. Let each man speak after his own manner, every man in his own order, each quickened soul bringing out its own individuality, and seeking in that individuality to magnify God and to show forth the riches of his grace. These remarks were suggested by the abundant record of cures in this chapter and elsewhere in Luke’s gospel. Luke does not write like John, nor copy the style of Matthew; he writes not as a fisherman or a publican, but as a physician. Luke did not cease to be Luke when he was called by grace, but he was the same man elevated and refined, and taught to consecrate to noblest ends the gifts which he had acquired in his earthly calling; he was a physician before, and he became “the beloved physician” after his conversion.