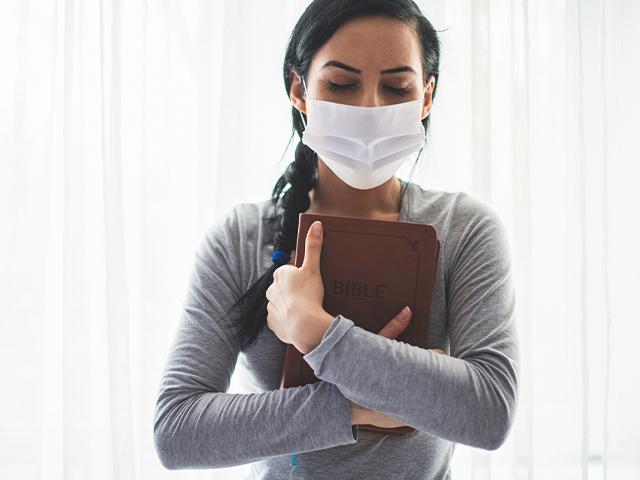 No doubt you’re familiar with the story of Martha and Mary found in Luke 10:38-42.

Martha and Mary opened their home to Jesus as he traveled through town with His disciples. The story contrasts the responses of the sisters. While Martha labored diligently to prepare and serve a meal, Mary sat at the feet of Jesus, soaking in His every word.

Martha grew angry because Mary wasn’t helping. Frustrated, she turned to Jesus and asked if He cared that she had to fix the meal alone. She urged Jesus to tell Mary to help her. But rather than follow Martha’s suggestion, Jesus gently rebuked her:

“Martha, Martha,” the Lord answered, “you are worried and upset about many things, but few things are needed—or indeed only one. Mary has chosen what is better, and it will not be taken away from her.” (Luke 10:41-42 NIV)

Although I longed to be a Mary, I was a Martha. I used to justify my response by telling myself It’s a Martha World. But now, because of lessons learned through the COVID-19 pandemic, I’m becoming a Mary.

Let’s return to the story. It’s important that the Marthas of the world recognize something in this passage. Jesus didn’t reproach Martha for her service but rather for being “worried and upset about many things.”

Serving is a principle of Christianity. The problem occurs when serving distracts us from its purpose. If serving becomes a never-ending to-do list, our eyes are not on Jesus. Our eyes are on what WE are doing. And sometimes on what those around us are not doing.

And Martha, being “distracted by all the preparations that had to be made” wasn’t in the moment. She wasn’t cherishing her time with Jesus.

The story of Martha and Mary teaches us it’s better to give our full attention to Jesus. When we enter the presence of God through Bible study or prayer, ideally our awareness is concentrated on Him. We don’t think about checklists. We don’t let our calendar distract us or our email derail us. We sit at His feet, listening to His words.

That’s good news for the Marthas of the world. It doesn’t mean we stop serving, but that we simplify. We stop being a martyr to our busyness. We evaluate what must be done and let the rest go. We find joy in our service to Him as we focus on His presence.

The words Jesus spoke to His disciples are still true today:

These days of semi-isolation are teaching us to gather strength from the only One who can provide it. We can linger in His presence, just like Mary, soaking in His every word more aware of the Spirit within than ever before.

It’s a lesson I vow never to forget.

You can’t escape Paul forever. At some point, every Christian must set aside self-righteousness and drink Paul’s writing, which can be akin to slurping down pickle juice. The sharp bitterness sends shivers through the whole body—and yet hydrates from the inside out (which is really what pickle juice does).

Far worse, in my mind, is Paul’s refusal to let us gloat or raise ourselves up. There’s no place for that, no room for a trophy case. Being isolated by my own sense of holiness would be easier; I’d love to slip away into my happy world of playing Christian.

Paul doesn’t even let me close the door.

“Look ‘out there,’” he says. “You see those people? That’s you—each one is just like you. They need the gospel. They need grace. You know all about it. You’ve met the same Jesus I did. They’re not coming in here, bub. So, get out there and do something.”

It’s an uncomfortable feeling, trying to understand how to be like Christ, how to shine through pitch. I want to pursue Him with all I am, but He keeps going out where the tax collectors and sinners are—people like me. The only difference is that I realized how much I needed Him; they haven’t yet. And perhaps the very reason they haven’t is because I’m not out there telling them.

Or as Paul might put it (at least, in my head), “They ain’t gonna hear if you don’t speak up. And they ain’t gonna fall on their knees if you’re too chicken.”

Jesus went to the synagogue—and then took the synagogue to the people who needed it most. He did most of His miracles out in the thoroughfares, tombs, fields, and corners of the world. His loudest messages echoed from hills and street corners. In fact, I didn’t meet Him in a church—or a Bible study or a church event. I met Him where Matthew did: in the middle of my sin.

“But they made light of it, and went their ways, one to his farm, another to his merchandise.” Matthew 22:5

It is making light of the gospel and of the whole of God’s glorious things, when men go to hear and yet do not pay attention. How many who frequent churches and chapels to indulge in a comfortable nap! Think what a fearful insult that is to the King of heaven. Would they enter into Her Majesty’s palace, ask an audience, and then go to sleep before her face? And yet the sin of sleeping in Her Majesty’s presence, would not be so great, even though against her laws, as the sin of wilfully slumbering in God’s sanctuary. How many go to our houses of worship who do not sleep, but who sit with vacant stare, listening as they would to a man who could not play a lively tune upon a good instrument. What goes in at one ear goes out at the other. Whatever enters the brain goes out without affecting the heart. Ah, my hearers, you are guilty of making light of God’s gospel, when you sit under a sermon without paying attention to it! Oh! What would lost souls give to hear another sermon! What would yonder dying wretch who is just now nearing the grave, give for another Sabbath! And what will you give, one of these days, when you shall be close to Jordan’s brink, that you might have one more warning, and listen once more to the wooing voice of God’s minister! We make light of the gospel when we hear it, without solemn and awful attention to it.

For meditation: Hear—listen—remember—obey (James 1:25). A sleeping congregation is no more use than a sleeping preacher.

“Demas, having loved this present world, has deserted me and gone to Thessalonica.” – 2 Timothy 4:10 NASB

Demas was a “fellow worker,” comparable to Mark (Philemon 1:24). To the Colossians, he was one of Paul’s companions, on par with Luke (Colossians 4:14). He had been a faithful servant, part of Paul’s inner circle.

But by the time Paul wrote to Timothy, Demas had “deserted” him. The Greek word indicates that he had transferred his loyalties elsewhere. What happened? Was he weary? In a relationship? A victim of sin? Attracted by other interests? We only know that his affections had shifted. Rather than seeking first God’s Kingdom, he had become focused on “this present world” with its pleasures.

Think of all that Demas had experienced! The miracles he had seen. The teachings he had heard. The times of prayer. Yet the attraction of the world was so strong that he could walk away from everything he knew. If the world could so pull this man, the same thing can happen to any of us.

Think about your own life – your affections, loyalties, and ambitions. What do you do with your time, talents, and treasures? Do the things of this world have such a hold on you that you might be willing to compromise or say or do the wrong things, even if just for a moment?

Search your heart. Renew your relationship with God. Remember, “The world is passing away, and also its lusts; but the one who does the will of God lives forever” (1 John 2:17).

May the God of hope fill you with all joy and peace as you trust in him, so that you may overflow with hope by the power of the Holy Spirit.
Romans 15:13
DailyVerses.net

For the entire law is fulfilled in keeping this one command: “Love your neighbor as yourself.”
Galatians 5:14
DailyVerses.net