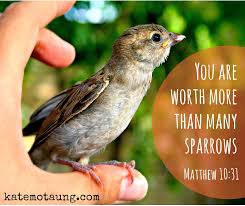 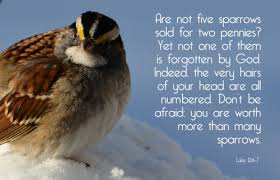 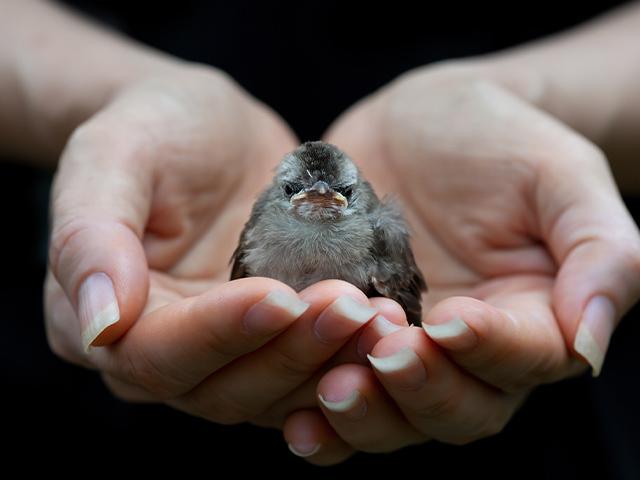 A little sparrow sat perfectly still on the deck of my patio. I tip-toed toward the bird. She made no attempt to fly away. I knelt down beside the poor creature and studied her delicate features and beautiful colors. Shades of grey and white crisscrossed the little bird’s body, forming patterns that could mesmerize an artist. A splatter of yellow on its belly added to its beauty.

I can’t leave her here, out in the open.

The sparrow shivered when I touched her, and opened her eyes slightly. I examined her thoroughly like an animal detective. No signs of injury.

I scooped the bird into my hands gently and took her inside the kitchen. On the counter I found an empty carton of granola bars. I ripped off the top and lined the carton with a kitchen towel. Perfect! I placed the bird in the makeshift nest. She was safe here, both from the wintery cold and my ever-hungry dog.

I grabbed my laptop and searched the Internet for advice to deal with abandoned or injured birds. One wise birder suggested that birds sometimes went into a temporary state of shock when they flew into a glass window. With time, he said, they recover from the accident and fly away.

Maybe the pretty bird flew into the French windows of my living room. Could she have been so scared that every muscle in her body froze?

I could relate to her.

We had recently moved from Los Angeles to San Jose. I missed the beach-y vibe of my former town which had been home for over six years. I had friends who had become family. My Bible study mates became community. I was settled and rooted.

When we moved, the rug was pulled out from under me. The change overwhelmed me. The unfamiliarity disoriented me. Paralyzed by loneliness, I did the bare minimum to get through the day. Daily chores became drudgery. No activity seemed enjoyable. Like the sparrow, I was incapacitated, stunned by the enormity of change that shook my world.

“The eyes of the Lord are on the righteous, and his ears are attentive to their cry.” (Psalm 34:15 NIV)

God sent His people, strangers to me but friends with Him, to pick me up and provide shelter while I regained my perspective and renewed my faith. Old friends called and prayed with me, pointing me to God’s goodness. A parent from my son’s school befriended me and showed me around San Francisco. Within two months of moving, we found a church that felt like home the minute we walked in the sanctuary. We were invited to a Bible study by a family we met at church.

On my own, I was weak. But God provided community to pull me up and push me forward.

“Therefore encourage one another and build each other up …” (1 Thessalonians 5:11 NIV)

They reminded me that I could trust God even more in the midst of unknown surroundings and an uncertain future.

And before I knew it, I began to fly again.

Back in the kitchen, after 10 minutes or so, the sparrow fluttered its wings. With eyes opened wide, it searched for a way out. I opened the door to my patio and watched in amazement as the bird soared into the sky with new-found vigor and vision.

The Context of Stillness

How many times have you heard this verse? A hundred? A thousand? This snippet of a psalm is a pet verse of mine. It constantly pops into my head when I start getting too busy or stressed out. Ironically, I hadn’t taken time to read the whole psalm in months until the other night, and I had no recollection of the verses surrounding my favorite one-liner. Here’s a sampling of the other verses in Psalm 46:

“Though the mountains be moved into the heart of the sea…” (vs. 2)

I had been picturing an idyllic, Psalm-23-ish passage as the setting for my pet verse, but the context is completely different. This psalm is actually the meditation of a man holding back fear with faith. In a setting of uncertainty, war, and all-around “trouble” (vs. 1), the psalmist focuses on the peace that comes from being the presence of God… even though the earth around him threatens to fall apart. The verse holds even more power in this context than in my imagined setting, doesn’t it?

I love the Psalms because of their deep meditations on humanity confronted with God’s holiness and faithfulness. I can see real men writing the lines, reminding themselves of the bigger context for their troubles. I see people who – like me – wondered what would happen next in this life. But every one of them comes to the realization that they serve a God who supersedes their worries and replaces them with worship. The psalmists heard the command to “be still and know” and found that God blew their imaginations.

I often look at looming elections and financial woes and start getting jittery, wondering about outcomes and impacts. In times like this, I slip into a mentality that thinks “being still” and listening to God can only happen in Psalm 23‘s green pastures. But the real context of Psalm 46 tells me otherwise. God’s amazing peace works most powerfully when the world’s craziness reaches a crescendo. Hope lives amid despair, not perfection. Like they say, context is everything.

“Vindicate me, O God, and defend my cause … from the deceitful and unjust man … you are the God in whom I take refuge … Why do I go about mourning because of the oppression of the enemy?” – Psalm 43:1-2 ESV

The psalmist felt unfairly accused. What particularly bothered him was that many of his oppressors were “deceitful and unjust.” He turned to God, pleading for His defense. Although he was taking refuge in God, he still felt besieged. Instead of experiencing deliverance, he felt rejected.

Facing these kinds of troubles, others might have given up or stopped looking to God. Instead, the psalmist intensified his focus on Him. David cried out to God, “Send out your light and your truth; let them lead me” (v. 3).

Renewed in his confidence, the psalmist then imagined the day when his circumstances would change. He would be vindicated by God, who would reward him for his faithfulness. It would be a time of “exceeding joy” as he would be filled with praise (v. 4).

As we face life’s troubles, we, too, can be tempted to give up. If we don’t see immediate change, we can wonder when God will intervene and circumstances will turn around. We need to strengthen our relationship with Him while we wait. Let Him know that we still trust Him. Seek Him with renewed intensity. Be led by His light.

You might feel cast down and in turmoil. But the Bible promises that as you hope in God, you can be confident, sure that He will deliver you. You will praise Him again. You always should remember that He is your salvation.

Christ’s prayer for his people

We never have any encouragement to ask God to let us die. Christians are always wanting to die when they have any trouble or trial. You ask them why? “Because we would be with the Lord.” O yes, they want to be with the Lord, when troubles and temptations come upon them. But it is not because they are yearning to be with the Lord, it is because they desire to get rid of their troubles. They want to get home, not so much for the Saviour’s company, as to get out of the little hard work. They did not wish to go away when they were in quiet and prosperity. Like lazy fellows, as most of us are, when we get into a little labour we beg to go home. It is quite right sometimes that you should desire to depart, because you would not prove yourself to be a true Israelite if you did not want to go to Jerusalem. You may pray to be taken home out of the world, but Christ will not take up the petition. When your prayers come to the Lord, this little one may try to get amongst them, but Christ will say, “I do not know anything about you, ‘I pray not that thou shouldest take them out of the world.’” You may wish it sincerely, and really desire it, but you will not at present get your Master to pray with you. Instead, then, of crying, or wishing to be away from the battle, brace yourself up in the name of the Lord. Every wish to escape the fight is but a desertion of your Master.

For meditation: Elijah prayed it while he was afraid for his life (1 Kings 19:3,4)! But God had a different departure planned for him (2 Kings 2:11). Jonah prayed it twice when he was angry (Jonah 4:3,9) soon after begging God to deliver him from drowning (Jonah 2:2,7). What a good thing God rejects our foolish requests when we or they are outside his will. Paul had the mind of Christ on this matter.