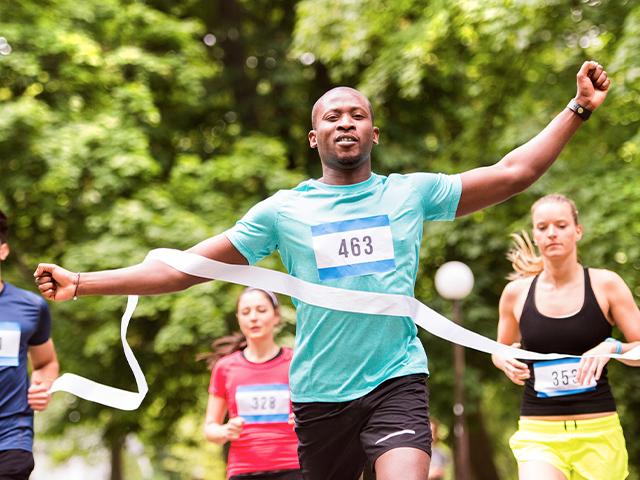 Have you ever been ambushed by an unpleasant surprise? Vanderlei de Lima, a Brazilian marathon runner, had an unpleasant surprise in the 2004 Olympic Games in Athens, Greece. He had already run over twenty-two miles, with just four more left in the race, when “a crazed man rushed into his path and shoved him off the course into a crowd of spectators.”1 The crowd wrestled the man away from de Lima, who was able to regain his composure and continue the race.

But de Lima was not able to regain the lead. Although the incident happened in a matter of seconds, he could not recover the time lost, and finished in third place.

In an interview, de Lima said, “If you stop in a marathon, you struggle the next three or four kilometers. It’s hard to get your rhythm back.”2 Surprises in life can throw us off course or stop our forward movement. Attacks on our faith, courage, and joy can easily ambush us, and hinder our forward progress in life. Rejection and abandonment could have taken the apostle Paul out of the race, but he kept running.

This you know, that all those in Asia have turned away from me, among whom are Phygellus and Hermogenes. (2 Timothy 1:15 NKJV)

How easily does the fear of rejection stop you? Sometimes we might be afraid when we join a group or start a friendship. We may think, “What will they think of me? Will I fit in?” When we feel God wants us to say an encouraging word to someone or promise to pray for them, we may wonder, “Will they accept it well?”

The kind of rejection Paul faced wasn’t a disapproving look or being excluded from the group. It far surpassed that. All in Asia had turned away from him. The people he had spent two years teaching (Acts 19:10), did not stand with him when he was persecuted for Christ’s sake. At least a few of Paul’s friends or fellow workers in the kingdom still cared about him, like Onesiphorus mentioned in the same chapter. But those in Asia—the region of modern-day Turkey—turned away from him. Could we stand such rejection?

Paul didn’t let rejection ambush his courage and determination, and neither did Jesus. He is our greatest example of faithfulness under fire. We can find no greater courage and love than the courage and love of Christ. All forsook Him and abandoned Him, yet Jesus said yes to God. Yes to do the hard thing—to be separated from the Father to pay for our sins and to bear the weight and burden of the cross.

Father, if it is Your will, take this cup away from Me; nevertheless not My will, but Yours, be done. (Luke 22:42 NKJV)

Our sins may have put Jesus on the cross, but His love kept Him there. For love’s sake, He gave His life.

When someone stops loving us, or treats us in a way contrary to love, what will our reaction be? Will we let someone else’s negativity hinder all the good that God wants to do through us?

Jesus is with us in the race. Nothing escapes His attention. He knows what happens to us and how to counteract the discouragement or opposition we face. He has faced rejection and won. All the suffering that Jesus endured wasn’t strong enough to keep Him from fulfilling the mission God had given Him. When something threatens to push us off course, Jesus is our support; He is with us every step of the way. Keep going.

Give a Little Grace

Accept him whose faith is weak, without passing judgment on disputable matters (Romans 14:1).

Winter weather is pretty bipolar in the great Commonwealth of Virginia. One day it can be warm and sunny, and the next day you curse your bad luck for not wearing earmuffs and gloves when you walk out the door. However, when bad weather is forecast, local reactions are solidly predictable, specifically when it comes to “preparation” and driving in abnormal road conditions.

People around here freak out and buy a lot of bread and milk when storms are predicted. If your significant other suggests, “Hey, we’re out of ____, can you stop by Wal-Mart?” on the evening a snowstorm is predicted to hit: forget about it; society is on crazy pills. Additionally, nobody around here can drive in the snow either. Obviously greater caution is called for with icy and slippery road conditions, but people see white stuff and generally throw out every rule they ever learned about How to Be a Good Driver.

Such reactions generate a lot of scorn from imported northerners. After all, children in Michigan attend school daily in the wintery months in upwards of a foot of snow. Why do Richmond kids get classes canceled at the forecast of snow? There is definitely impatience and indignation – and no doubt it is well-deserved!

After doing a fair amount of grumbling during our recent snows, I thought, Hmm, this seems familiar… spiritually…

Isn’t it easy to find ourselves being “northerners” when we find ourselves around those at different points in their spiritual walks? We find it easy to look down upon, mock, or judge people who have difficulty living with restraint, modesty, chastity, gentleness, or a host of other spiritual virtues. We roll our eyes at people unfamiliar with the Bible, who can’t rattle off verses by memory as quickly as their ABCs.

Essentially, we are impatient with those who have less (or different) theological, spiritual, or biblical exposure and knowledge. But how is that fair? In reality, many people are ill-prepared simply because of their upbringing. Many come to Christ as adults, out of nonbelieving families. Many people don’t have much time (or the inclination!) to devote to in-depth biblical or theological study. Many people grew up in a church where only the most basic of Gospel truths were touched on, and become paralyzed when more complex life situations rear their ugly heads.

Should all Christians have an intense drive to make themselves as knowledgeable and as spiritually “prepared” as possible? Well, yes. But we live in a busy, imperfect world full of busy, imperfect people. Everyone’s experience is different; everyone is part of a unique story.

So when the “snowstorms” of life come, don’t mock the “southerners” in your midst who freak out. Instead, be there for them. Extend grace, love, and friendship. Not everyone can be prepared for what seems like No Big Deal to you. Everyone’s hard place deserves validation in a Kingdom of God marked by compassion, equality, forgiveness, and love. 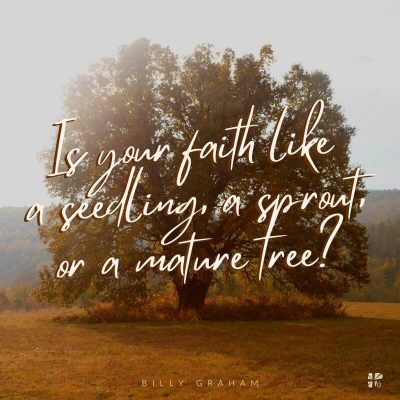 His divine power has given to us all things that pertain to life and godliness, through the knowledge of Him who called us. — 2 Peter 1:3

How can we develop a faith strong enough to see us throughout our lives?

The key is this: God wants us to be spiritually strong and has provided us with every resource we need.

We need God’s strength to face life’s challenges — and He wants to give it to us.

Tragically, many Christians never discover this. They have committed their lives to Christ… they may be active in their churches… they pray and read their Bibles on occasion — but they remain spiritually immature and weak in the face of life’s temptations and setbacks.

We may be old in years, but if our faith is immature, we will be fearful and unprepared. But it doesn’t need to be this way. Just as a baby needs food and exercise in order to grow, so we need the spiritual food and exercise God has provided for us. Without them our faith is weak, but with them spiritual strength increases, and we are better prepared for whatever life has in store for us.

What are you doing now that will make you spiritually mature when you’re older?

From Seedling to Tree

He shall be like a tree Planted by the rivers of water, That brings forth its fruit in its season. — Psalm 1:3

It is no accident that the Bible compares us to trees, urging us to grow spiritual roots that are deep and strong. But a tree wasn’t always a tree. It began as a small seed. Spiritual life also begins with a seed — the seed of God’s Word planted in the soil of our souls that eventually sprouts and becomes a new seedling as we are born again. But though we’re saved, we aren’t meant to remain spiritual seedlings, weak and vulnerable to every temptation or doubt or falsehood or fear. God’s will is for us to grow strong in our faith and become mature, grounded in the truth of His Word and firmly committed to doing His will (1 Peter 2:2).

Giving your life to Christ is an essential first step — but it is only the first step. God’s will is for you to become spiritually mature, growing stronger in your relationship to Christ and your service for Him. Conversion is the work of an instant; spiritual maturity is the work of a lifetime.

Is your faith like a seedling, a sprout, or a mature tree?

Be mature and complete, not lacking anything. — James 1:4 NIV

We cannot pretend to be something we are not; a Christlike character cannot be faked. If Christ is not real to us or if we haven’t learned to walk with Him and submit our lives to Him every day, then our spiritual impact will be far less than it might have been. People are very sensitive to hypocrisy; if they sense it in us, they will dismiss our pretenses and pay no attention to our advice. On the other hand, if they can sense our faith is sincere and our love is authentic, then they will respect us and take us seriously (even when they know we are not perfect).

This is why it is important to begin building our lives on the solid foundation of Jesus Christ now, instead of waiting until it is too late and the problems of old age overwhelm us. Every gardener knows that mature fruit does not appear overnight. It takes time to grow — and so does the fruit of the Spirit in our lives. Start tending your garden today, so you may be “mature and complete.”

In what place in your life do you most need spiritual growth?

Know therefore that the Lord your God is God; he is the faithful God, keeping his covenant of love to a thousand generations of those who love him and keep his commandments.
Deuteronomy 7:9
DailyVerses.net

And walk in the way of love, just as Christ loved us and gave himself up for us as a fragrant offering and sacrifice to God.
Ephesians 5:2
DailyVerses.net