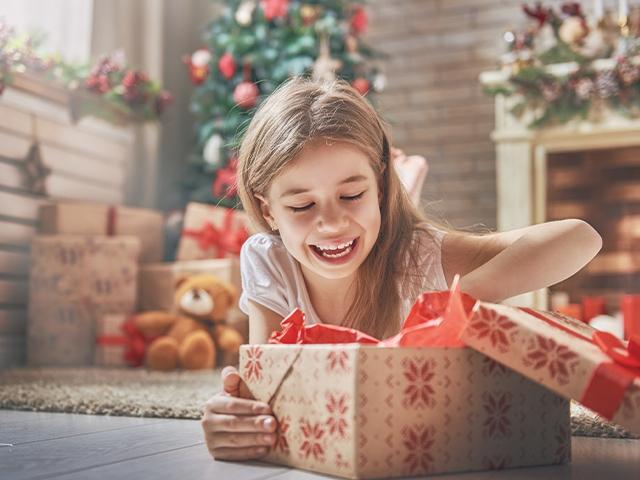 Who doesn’t love Christmas and the memories it brings? As you think of your favorite Christmas, what makes it memorable for you? Was it where you spent it, who you spent it with, or the gift you received? Maybe it was unforgettable because of the gift you gave to someone special.

My favorite Christmas was the time I put my name on every gift under the tree. I have a large family with five sisters plus my mom and dad. My aunt and uncle came over Christmas Eve to stay the night with us. While everyone was busy preparing for Christmas Day, I sat on the floor by the Christmas tree with wrapping paper, scissors and a pen, making new gift tags with my name on each one. I added those to every gift under the tree. The next morning, while my uncle handed out the gifts, the pile in front of me grew larger and larger as I got most of them. The expressions on everyone’s faces were priceless. My mom knew something was not right and as she looked around the room, her eyes stopped on me. I confessed my deed, and she gave the packages, unopened, to their rightful owners. We all laughed and my family still reminds me of that Christmas. It is a fun memory for us all.

Have you ever thought about God’s favorite Christmas? Which parts do you think He most fondly remembers?

God created us to have fellowship with Him. But, sin penetrated His perfect world and separated us from Him. We could no longer experience life with God, only death without Him. Alone. Heaven must have been lonely with only the Godhead and a mere myriad of angels, and not one human being in sight. He wanted us to live with Him in His home.

God knew the Way to make that happen.

“For God so loved the world, that He gave His only Son, that whoever believes in Him should not perish but have eternal life.” (John 3:16 ESV)

The Father entrusted a young girl with His only Son—a human carrying deity. She wasn’t the richest or the most experienced or even married. But, Mary loved God, and she was the perfect mother for His Son. Even knowing His Son’s life would be threatened before He was two; God sent Jesus to be born in a dirty cave and laid in a manger of straw in the company of sheep and shepherds. Imagine how proud He must have been on that day and how bittersweet it was when Heaven became even lonelier.

God watched as the angels rejoiced at His perfect plan. Their instructions were to proclaim the good news to the lonesome shepherds in a field guarding their sheep that night. God didn’t tell the wealthy or the well-known. Instead, He sent His angels to the shepherds, the ones who protected their sheep and looked for the lost lamb. They would understand His King. How the Father must have loved the expression on their faces when His angels ignited the dark sky! I imagine His eagerness for them to behold His Gift.

God looked forward to the day His Son returned Home ushering men, women and children to live with Him forever. Yet, how grievous the sting God felt knowing what Jesus must endure so we could be welcomed into Heaven.

God put His name on His present, too—Immanuel, God with us. All He wants is for us to accept His gift. Don’t leave this precious One unopened. God’s favorite Christmas is the most unforgettable because of Who He gave us.

Thanks be to God for His inexpressible gift! (2 Corinthians 9:15 ESV)

What Are You Thankful For?

“I will praise the name of God with a song; I will magnify him with thanksgiving.” – Psalms 69:30

A while back, there was an episode of The Simpsons in which the family is celebrating Thanksgiving. When the time came to say grace, Bart Simpson bowed his head and said,

“Dear God, we paid for all this stuff ourselves, so thanks for nothing.”

The first time I saw this clip on TV I remember feeling a mix of emotions. On one hand, I was angry that such cynicism was being shown toward God and a day celebrating thankfulness. On the other hand, I couldn’t help but relate to Bart a little. I was at a time in my life when everything seemed out of control. I had no money, my life felt like it was stuck in neutral, and my future was looking pretty bleak. Why should I be thanking God for anything?

If you’ve ever been in my situation, I want to point you toward a passage of scripture that helped me put things in perspective,

“On the way to Jerusalem he was passing along between Samaria and Galilee. And as he entered a village, he was met by ten lepers, who stood at a distance and lifted up their voices, saying, “Jesus, Master, have mercy on us.” When he saw them he said to them, “Go and show yourselves to the priests.” And as they went they were cleansed. Then one of them, when he saw that he was healed, turned back, praising God with a loud voice; and he fell on his face at Jesus’ feet, giving him thanks. Now he was a Samaritan. Then Jesus answered, “Were not ten cleansed? Where are the nine? Was no one found to return and give praise to God except this foreigner?” And he said to him, “Rise and go your way; your faith has made you well.’”  – Luke 17:11-19

It’s easy to spend our lives worrying and obsessing over the problems of life. It’s also easy to overlook a blessing in times of need, or forget to be thankful when troubled times have been put to rest. Be sure you don’t become one of the nine lepers, who were so happy to be cured that they forgot who cured them. This Thanksgiving, I encourage you to spend time remembering what God has done in your life.

“You are holy and blameless as you stand before him without a single fault … Don’t drift away from the assurance you received when you heard the Good News … This is the secret: Christ lives in you. This gives you assurance of sharing his glory.” – Colossians 1:22-23, 27 NLT

In many ways, hope seems like a very human concept. Some theological concepts can seem complex and hard to grasp. But we all can understand hope.

But Paul told the Colossians that the hope he discussed was a mystery: Christ in us. He is among us. Inspired, encouraged by hope, we can “continue to believe this truth and stand firmly in it” (v. 23). We may face challenges but still know that, in God’s sight, we are “holy and blameless.”

We may be weak and make mistakes. We may not experience instant, overwhelming success. But we still can have hope. We can trust in Jesus and hope in the future that He described. We can hope in the promises in His Word.

Do you have reasons to be afraid? Worried? Uncertain? Discouraged? These are times to place your hope in the Lord. Hang on to your hope, even when the world around you may think there is no hope. Remember that Jesus is with you – right now.

Arise, shine, for your light has come, and the glory of the Lord rises upon you.
Isaiah 60:1
DailyVerses.net

Jesus Christ is the same yesterday and today and forever.
Hebrews 13:8
DailyVerses.net