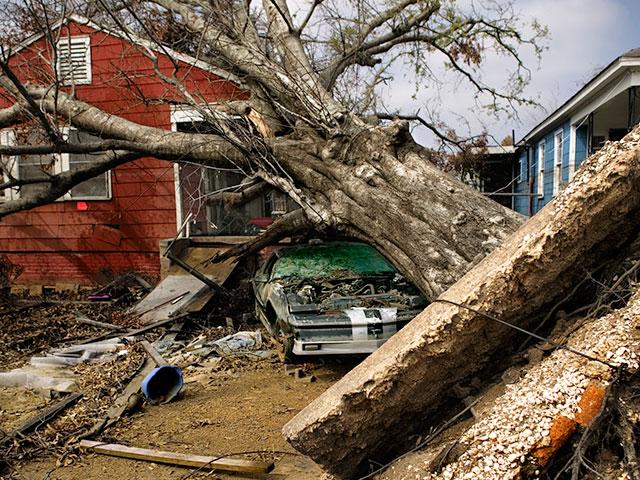 Have you ever thought that something was so terrible, that it could never be the same again? Let me tell you a true story.

Last year there were four big, old, oak trees that had to be removed from my backyard. Their limbs were breaking from each storm we encountered. During the last hurricane, one of those branches fell straight through a small shed in the yard and the roof had to be replaced.

It was wonderful to see those branches finally down. However, the only problem was they were not removed from the yard as soon as I would have liked.

It was a very long time that they lay there. I made a deliberate choice to not go out in the yard for months. My son cut the trees up into smaller sections to clear them and found a small snake. I could not even enjoy sitting out there.

Finally, the day arrived when the men came to remove the fallen trees. When I arrived home, I was excited. I ran to my window and flung open the curtains. I thought of the poem, “The Night Before Christmas” by Clement Clarke Moore.

As the poem says: “Away to the window I flew like a flash, tore open the shutter, and threw up the sash.”

What do you think I saw? No, there were no reindeer. My once beautiful backyard had been dug up by a tractor with big clamps.

The whole yard had been tilled, and all I could think about is the prospect of one gigantic mud hole by the next rainfall. I did not feel like we should rake the yard to get it level, nor did I think that we should buy grass seed to plant because I had more important matters to heed to, such as preparing for my daughter’s wedding.

Sometimes you just have to let go. The Bible says we aren’t to worry or be anxious. I decided right then and there to forget about it, like the kids always say, “It’s not that serious,” and it isn’t.

I think I had forgotten I had a yard until one morning, I opened the bathroom window to look out at the weather. I was totally taken back. There was beautiful, green grass all over the yard, and only one small, sunken place in the middle of the yard where there had been a pond years ago.

Now it was full of muddy water, but it seemed so small in comparison to the once giant mud hole that covered the whole yard. It was now fixable.

It seemed as if angels literally came and poured new grass seed overnight, perhaps heavenly seeds since it looked so different!

Doesn’t the Lord promise to take care of things in our life when we just give it to Him? I had a hard time believing that the original disaster which seemed so devastating could now be something so delightful. The amazing thing to me is that I did nothing to make the change. The Lord created the earth, so He surely knows how to put it back together.

He used all the rain in my muddy yard to speed up the process for new grass to grow. I thought it was ruined, and so did the neighbors.

Next time that you think something is too big of a mess in your life, it really isn’t. It may take some time to get corrected, but it will. Believe God, cast your burdens on Him, and let Him see you through it.

“And we know that God causes all things to work together for good to those who love God, to those who are called according to His purpose.” Romans 8:28 (NAS)\

Numbers 11:21-23 (NIV) 21But Moses said, “Here I am among six hundred thousand men on foot, and you say, ‘I will give them meat to eat for a whole month!’ 22Would they have enough if flocks and herds were slaughtered for them? Would they have enough if all the fish in the sea were caught for them?” 23The LORD answered Moses, “Is the Lord’s arm too short? You will now see whether or not what I say will come true for you.”

The people were whining about not having meat to eat. Moses was very discouraged. God promised meat for a month along with some valuable lessons. Moses just couldn’t see that it was possible. He looked out over the camp and couldn’t imagine how God could do it. His response to God was an exaggeration. Certainly all the fish in the sea could have fed them. Even the flocks they drove before them could have fed them. When we are discouraged, even the practical looks impossible.

God’s response is worth memorizing and keeping at hand when you think He has promised more than can be delivered. Has the omnipotent God lost some of His power? Can’t the One who created the world and everything in it provide anything at anytime He chooses? Is any thing out of His reach? Don’t limit the Eternal One! He can do whatever He says He will do in keeping with His perfect character.

This was going to be a lesson for Moses and for you and me. You and I have seen what God can do when we read these true stories. We have seen what He has done in the lives of people we know and in our own life. We have seen that God can do what we considered impossible. Never doubt God’s capability to do what He has promised. He is able! You have seen it. You will see it again. Trust Him, and climb out of your pit of doubt up into the sunlight of faith.

Meditation: Do I truly consider God capable of doing anything in keeping with His character?

Streams in the Desert – March 4

Followers of them who through faith and patience inherit the promises (Heb. 6:12).

They (heroes of faith) are calling to us from the heights that they have won, and telling us that what man once did man can do again. Not only do they remind us of the necessity of faith, but also of that patience by which faith has its perfect work. Let us fear to take ourselves out of the hands of our heavenly Guide or to miss a single lesson of His loving discipline by discouragement or doubt.

“There is only one thing,” said a village blacksmith, “that I fear, and that is to be thrown on the scrap heap. “When I am tempering a piece of steel, I first beat it, hammer it, and then suddenly plunge it into this bucket of cold water. I very soon find whether it will take temper or go to pieces in the process. When I discover after one or two tests that it is not going to allow itself to be tempered, I throw it on the scrap heap and sell it for a cent a pound when the junk man comes around.

“So I find the Lord tests me, too, by fire and water and heavy blows of His heavy hammer, and if I am not willing to stand the test, or am not going to prove a fit subject for His tempering process, I am afraid He may throw me on the scrap heap.”

When the fire is hottest, hold still, for there will be a blessed “afterward”; and with Job we may be able to say, “When he hath tried me I shall come forth as gold.”
–Selected

Sainthood springs out of suffering. It takes eleven tons of pressure on a piano to tune it. God will tune you to harmonize with Heaven’s key-note if you can stand the strain.

Things that hurt and things that mar
Shape the man for perfect praise;
Shock and strain and ruin are
Friendlier than the smiling days.

“About this time tomorrow I will cause very heavy hail to fall, such as never has been in Egypt from the day it was founded until now.” – Exodus 9:18 ESV

Storms can be frightening. But the storm God sent n Egypt was unique. It was a storm “as never has been in Egypt from the day it was founded until now.” The lightning was relentless. The winds, intense and overpowering. The hailstones hit with devastating impact. No wonder people were terrified!

There was massive damage: “The hail struck down every plant of the field and broke every tree of the field.” Those heeding God’s warning were spared. But those who refused to listen paid the price.

Pharaoh had not responded to the previous plagues, but this was different. Considering this awe-inspiring demonstration, he finally relented and agreed to let the Israelites go. Eventually, Pharaoh would change his mind, but God was not surprised. Moses also knew that Pharaoh did not fear the Lord. More pressure would be needed.

In light of the troubles they face, how many people make promises to God and seem willing to do anything for relief. Yet many of these people eventually change their minds or forget their promises. They simply aren’t serious about obeying God.

All the while God looks for people who really listen and respond and will do His will. Eventually, Pharaoh became one of those people, but it took more than a violent storm.

Pay attention to God’s warnings. Only make promises that you will keep. Live according to His Word. Listen. Be ready to change, to do His will.