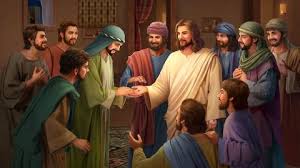 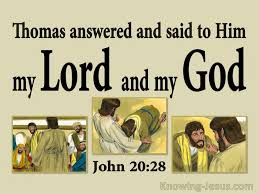 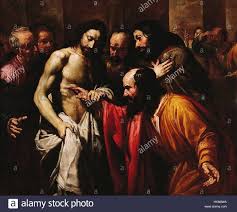 Shortly after being raised from the dead, Jesus appeared to the disciples, who were in hiding. This was a significant turning point for our Lord’s followers, for they received a mission to go into the world and proclaim the forgiveness of sins through belief in the gospel (John 20:19–23). Yet, not all of the disciples were present the first time Jesus appeared to them after the resurrection; Thomas was absent (v. 24).

The disciples told Thomas that Jesus had shown Himself alive to them. However, Thomas did not believe them and said that he would not believe until he saw the nail marks in our Lord’s hands and put his hand in Jesus’ pierced side (v. 25). Subsequent generations of the church have called him “doubting Thomas” because of his unbelief and his demand for physical evidence of the resurrection.

Christ soon gave Thomas such evidence. Eight days after appearing to the disciples, Jesus came again to them, and this time Thomas was there. We might be tempted to look down on Thomas for his lack of faith, but note that the disciples were again gathered in a locked room, so they still feared arrest (v. 26). The other disciples might have believed that Jesus was alive, but that faith had not yet led to the courage that is the fruit of authentic trust in the Lord (Josh. 1:9). They were not much more trusting than Thomas on that point.

Entering the room, Jesus told Thomas to see His nail marks and place his finger in His pierced side (John 20:27). Here we see evidence of Jesus’ supernatural knowledge, for we have no indication that the other disciples had told Jesus what it would take for Thomas to believe (see v. 25). In fact, Thomas’ confession of Jesus as his Lord and God (v. 28) confirms that Thomas understood exactly whom he was talking to. Thomas may not have known all the ramifications of the resurrection, but he knew that Jesus’ resurrection and the Lord’s knowledge of what he needed to believe demonstrated Christ’s deity.

Jesus responded to Thomas with a blessing on those who would believe in His resurrection without seeing Jesus’ physical, resurrected body (v. 29). This was probably not a rebuke of Thomas for needing evidence to believe. More likely, Jesus was signaling that those who believe in Him without seeing His physical, resurrected body are just as blessed as Thomas and the other disciples who did see it. We who believe in Jesus based on the Apostolic testimony are not lesser disciples than those who saw Him in the flesh.

According to the apostle John, Thomas was not present on Easter Sunday evening when Jesus appeared to the other disciples and devoted followers (John 20:24). And regardless of what they said, Thomas refused to believe that Jesus had risen till he saw Jesus with his own eyes (John 20:25) — a declaration that earned him for posterity the unflattering title “Doubting Thomas.”

The Holy Spirit did not inspire John to include this account in order to embarrass Thomas. Rather, it’s recorded because God has important things to teach us about our own doubts and what kind of “seeing” really brings us joy.

“I Will Never Believe”

Early Sunday morning, when Mary Magdalene first reported that Jesus’s body was missing (John 20:1–2), Thomas felt like he was in good company. None of the apostles, except perhaps John (John 20:8), really believed that Jesus was alive.

But then the women claimed to have seen him (Matthew 28:9), and then Peter (Luke 24:34), and then a follower named Cleopas (Luke 24:13–32). Lastly, by that evening, all of Thomas’s closest friends claimed that Jesus had suddenly appeared in the middle of a locked-door meeting where he spoke and even ate with them (John 20:19; Luke 24:42–43) — a meeting Thomas missed for some reason.

“God has important things to teach us about our doubts — and what kind of ‘seeing’ really brings us joy.”

So, Thomas soon found himself in bad company. The only other member of the Twelve who had not seen the risen Christ was Judas Iscariot.

Why Didn’t He Believe?

Why did Thomas respond this way to friends he knew so well and trusted? The words he spoke tell us of the horror he actually saw.

The Gospel accounts of Jesus’s death are sparse on details, so it’s hard for us to feel what Thomas felt as he actually watched Jesus die. In fact, Thomas’s declaration of unbelief (“unless I see in his hands the mark of the nails”) is the only time nails are mentioned in the Gospels as part of Jesus’s crucifixion. Most of what we know about Roman crucifixion we learn from other sources.

The slaughter of Jesus outside Jerusalem had been so gruesome that it was all but humanly impossible for Thomas to imagine a resurrection of Jesus’s body. True, Thomas had seen Lazarus’s resurrection. But Lazarus had died of an illness, and Jesus had been there to raise him. Jesus had been torn to shreds and died.

How does a mutilated man raise himself? Let’s not assume too quickly that we would have responded differently had we seen what Thomas had seen.

Thomas’s doubts may have been humanly understandable, but they were not commendable. They were sinful, as is all unbelief (Romans 14:23).

And Jesus was not in a hurry to relieve Thomas’s doubts. He let Thomas stew in his own unbelieving words uncomfortably alone in the midst of a joyful fellowship of believers for eight awkward days (John 20:26).

Finally, a full week after Easter, Jesus appeared when Thomas was present and said, “Put your finger here, and see my hands; and put out your hand, and place it in my side. Do not disbelieve, but believe.” (John 20:27).

Blessed Are Those Who Have Not Seen

Then Jesus said something that was meant not only for Thomas, but also for all of us: “Have you believed because you have seen me? Blessed are those who have not seen and yet have believed” (John 20:29).

Thomas had been chosen by Jesus to be a unique authoritative witness of his resurrection (Acts 1:22) — that’s why Thomas was granted the gift of seeing Jesus with his physical eyes.

“Faith-seeing, in this age, results in more joy than eye-seeing.”

But Jesus’s rebuke is clear enough. There were others who had not yet seen Jesus, but still believed in his resurrection. And their believing was more blessed than Thomas’s seeing. Why? Because those saints relied on their eyes of faith more than the eyes in their heads — and faith-seeing, in this age, results in more joy than eye-seeing.

This is why Peter, Thomas’s fellow eyewitness, later wrote, “Though you have not seen him, you love him. Though you do not now see him, you believe in him and rejoice with joy that is inexpressible and filled with glory, obtaining the outcome of your faith, the salvation of your souls” (1 Peter 1:8–9).

Faith, as the Bible describes it, is not blind. Unbelief is blind. Faith sees a reality beyond what eyes can see, a reality that God reveals to us which is more important, in fact more real, than what we can see with our physical eyes (Hebrews 11:1).

God reveals this reality to us through his living and active word (Hebrews 4:12) that lights our path (Psalm 119:105). After his ascension, Jesus is seen only through the inerrant testimony of his prophets and apostles, recorded in the Scriptures, and the imperfect testimony of followers whose heart-eyes have opened. This is the blessed kind of seeing that enables us to “walk by faith, not by sight” (2 Corinthians 5:7).

Glorious, inexpressible joy comes not by seeing Jesus now, but by believing in him now. Those who believe in Jesus in this age are more blessed than those who have seen him. Because believing is true seeing. And it is faith-sight, not eyesight, that results in eternal life (John 3:16).

“Glorious, inexpressible joy comes not by seeing Jesus now, but by believing in him now.”

Thomas had heard Jesus once say, “I came into this world, that those who do not see may see, and those who see may become blind” (John 9:39). Jesus had come to open the eyes of the heart. Eyesight was never a guarantee that people really “saw” Jesus. Judas was the greatest witness to this tragic truth.

Like he did for the other ten, Jesus forgave Thomas of his faith-failure and graciously restored him. But because of Thomas’s unbelief, Jesus made him a gracious example for us of the wrong kind of seeing to demand. If we find our seeing of Jesus is impaired, Thomas teaches us not to declare, “Unless I see I will never believe,” but rather, “I believe; help my unbelief” (Mark 9:24).

They told him, “We have seen the Lord!” But he replied, “I won’t believe it unless I see the nail wounds in his hands, put my fingers into them, and place my hand into the wound in his side.” – John 20:25

When most of the disciples first saw Jesus alive after his crucifixion, Thomas had not been with them. When the other disciples told him about the fact of the Resurrection, Thomas replied, “I won’t believe it unless I see” (John 20:25). Some of us are skeptical like Thomas was. We find it very easy to doubt what we cannot see or touch. The word doubt implies uncertainty, not knowing which way to take. Doubt itself is a choice, a matter of the will.

Perhaps we too are suspicious by nature, wanting hard evidence before we’ll go out on a limb about anything. We choose to believe what we believe; we choose to doubt what we want to doubt. The enemies of Jesus chose to deny his resurrection; they chose to believe that choosing to believe in the resurrection of Jesus Christ leads to joy, peace, and the experience of his risen life in us. The living Christ is the biggest reason we tell others about our faith. Paul, writing to the Corinthians, said, “If Christ has not been raised, then your faith is useless” (1 Corinthians 15:17). No other religion in the world boasts that its founder was actually God who became a man, was killed, yet rose again from the dead. Such claims should certainly be investigated! Even if you are skeptical by nature, like Thomas was, it is safe to investigate your doubts by taking them directly to Christ. Let him help you choose to believe!

But the Lord is faithful, and he will strengthen you and protect you from the evil one.
2 Thessalonians 3:3
DailyVerses.net

Ill-gotten treasures have no lasting value, but righteousness delivers from death.
Proverbs 10:2
DailyVerses.net