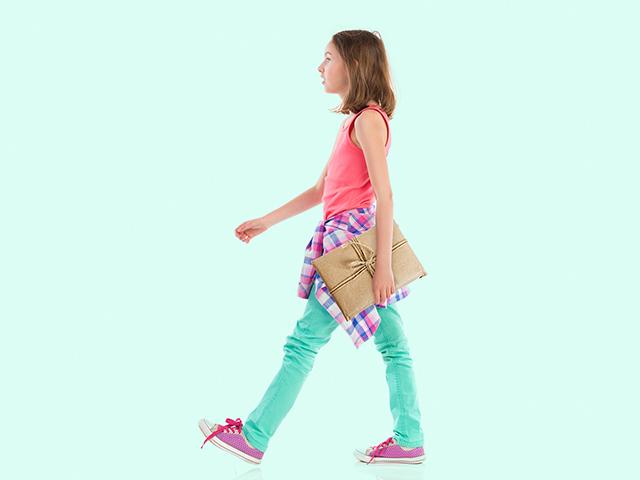 My granddaughter is a typical seven-year-old girl. She and I both love dolls and reading. For my own enjoyment and to encourage my granddaughter’s reading of history, I ordered her an American Girl Doll catalog. The catalog has dolls that come with fictional stories placed during certain periods of American history.

I let my granddaughter know all about the catalog and she caught my excitement. She began to anticipate the catalog’s arrival. Each afternoon, she would retrieve the mail and report the catalog was not there. Yesterday, she again reported the catalog had not arrived and the disappointment could be heard in her voice. In her hand, amongst several envelopes, was a magazine wrapped in brown paper. She did not know what she was holding until she tore open the wrapper and looked inside. Much to her surprise, it was the catalog! Excitement replaced the disappointment once she realized this was the long-awaited catalog. She thought the catalog would be bright and pretty and easy to identify. It had not come wrapped as she had expected.

How often do we expect things to come a certain way? We expect the answers to our prayers to be easily identified. Sometimes the answer appears differently from what we expect and not in the way we anticipate. The answer could be in our hands, simply wrapped up in plain brown paper. Like Alex, I need to open the wrapper and pull out the item.

One fine example was the birth of our Lord and Savior, Jesus. After all, He was born in a manger and not a palace. The people of His day were not looking for Him to arrive in such a lowly manner, but the shepherds and the Wise Men looked beyond their expectations and found Jesus.

So they hurried off and found Mary and Joseph, and the baby, (Jesus) who was lying in a manger (Luke 2:16).

We can also find Jesus just as the shepherds did. We need to remember He is King of Kings and Lord of Lords. His ways are not our ways.

For my thoughts are not your thoughts, neither are your ways my ways, declares the Lord (Isaiah 55:8).

I am so often sure I know what is going to happen in a certain situation. I think I know how God is going to answer. That is when I find out I have missed the blessing God has in store for me. I fail to look behind the cover! Like my granddaughter, I am disappointed, thinking nothing has happened. But the answer may have already arrived. We just need to keep on asking and looking. The scripture says we will find it if we keep on seeking.

Alex looked at the catalog, read, and reread all the descriptions of the dolls for most of the evening. What joy awaited her once she looked inside the wrapper! May we too look inside the wrappers and find our blessings and joys. Remember that they may come in unexpected ways.

Instead, speaking the truth in love, we will in all things grow up into Him who is the Head, that is, Christ. – Ephesians 4:15

Consider the following sets of words:

Which set best describes you?

Sometimes it feels like we Christians divide ourselves into these two camps. Camp A rightly believes that “God is love,” and as such they do a fairly good job of not alienating those they meet and know and care for. Of course, with every strength there’s a weak side, and sometimes our well-meaning Camp-A brethren can become wishy-washy and overly accepting, even false.

Camp B, on the other hand, rightly believes that “God is holy,” and as such they do a fairly good job of reminding those they meet and know and care for that sin is sin, and God can not tolerate it. Of course, sometimes our well-meaning Camp-B brethren can end up sounding a lot like gongs and cymbals, full of sound and fury, signifying nothing. People know we’re here, but they wish we’d quiet down for a bit. Perhaps all the conflict between our own camps has torn at your heart and worn down your spirit, too.

Now consider… which set of words best describes Our Father? Think about it before answering. We’ll come back to that thought in a minute.

I have a close friend, a youth minister, who has served many years at his current church. Recently, he was summoned to a meeting with the personnel committee and several parents. The gist of their message was that he was teaching the students too much about discipline and truth and knowing what the Bible says and so on. The criticism apparently was that there wasn’t enough about love and compassion in his messages.

Reading between the lines, it was clear that fear was at work: fear that these students weren’t being prepared for college and a world that is more about tolerance and acceptance and where Christian students who literally believe the Bible are ostracized. After all, who hopes for their child to face unpopularity, embarrassment, and harsh criticism while they’re already struggling to get ahead in the world? My friend would point out that he’s not opposed to compassion and love, not in the least. But what kind of foundation do you want to build in the youth?

It’s sad. Because at the end of the day… why can’t we have both?

I am talking about balance; checks and balances. I do wish to be balanced. A position of balance is a position of strength. A balanced person stumbles less often. How much fun is a teeter-totter where all the weight is pushed to one side?

I am also talking about paradox. A paradox is a seeming contradiction that nonetheless contains truth. A paradox says an object or person or idea is both this and that. Jesus is the world’s greatest paradox, being both fully God and fully man. With Christ as the example and the cornerstone, one learns to see that the whole Bible is full of paradox, including the fact that we can and should “Speak truth.” “In love.” Both/and. Just like Jesus.

Don’t forget, Campers, you have the Holy Spirit, which gives you wisdom, which instructs you as to which set of characteristics is needed in a given circumstance. Pull up the tent poles. Become nomadic. You can put on the armor of God, but if your feet aren’t balanced beneath you? Ask any beginner student of martial arts what the result will be.

But even if you find yourself gravitating more towards one campsite or the other, that’s okay. The same chapter that talks of the need to speak the truth in love also mentions, just a couple verses earlier, that, “It was He who gave some to be apostles, some to be prophets, some to be evangelists, and some to be pastors and teachers, to prepare God’s people for works of service, so that the body of Christ may be built up.”

We’re on the same team. And the goal is a “built-up body.” One that won’t stand unless balanced, unless level, unless unified. What’s the result? Refer back to our verse today. When we “speak truth in love,” we will “grow up.” Bottom line, Campers, our body needs to mature.

“But the very hairs of your head are all numbered.” Matthew 10:30

I shall always regard the fact of my being here today as a remarkable instance of providence. I should not have occupied this hall probably, and been blessed of God in preaching to multitudes if it had not been for what I considered an untoward accident. I should have been at this time studying in College, instead of preaching here, but for a singular circumstance which happened. I had agreed to go to College: the tutor had come to see me, and I went to see him at the house of a mutual friend; I was shown by the servant into one drawing-room in the house, he was shown into another. He sat and waited for me two hours; I sat and waited for him two hours. He could wait no longer, and went away thinking I had not treated him well; I went away and thought he had not treated me well. As I went away this text came into my mind, “Seekest thou great things for thyself? Seek them not.” So I wrote to say that I must positively decline; I was happy enough amongst my own country people, and got on very well in preaching, and I did not care to go to College. I have now had four years of labour. But, speaking after the manner of men, those who have been saved during that time would not have been saved, by my instrumentality at any rate, if it had not been for the remarkable providence turning the whole tenor of my thoughts, and putting things into a new track. You have often had strange accidents like that. When you have resolved to do a thing, you could not do it anyhow; it was quite impossible. God turned you another way, and proved that providence is indeed the master of all human events.

For meditation: God is never taken by surprise or inconvenienced by accidents. He puts his people in the right place at the right time (Esther 4:14).

“Fire came out from before the Lord and consumed the burnt offering and the fat on the altar. When all the people saw it, they shouted and fell on their faces.” – Leviticus 9:24 NKJV

The Israelites witnessed something amazing as fire came from before the Lord and consumed their offerings. In this overwhelming moment, they could not contain their delight. Not just happy, they “shouted with joy” (v. 24 NLT). This was a deep response, bubbling from within them. They celebrated as individuals and together as a community.

They had witnessed God’s presence. They saw that He was real and on their side. He had proven that He kept His Word. Knowing that He was with them, they had no reason to fear. Who could harm them? What need could He not supply?

After their shouts died down, they seemed to realize the awesomeness of what they had just witnessed. They had encountered God and seen a glimpse of His glory. Overwhelmed by His greatness, they fell on their faces before Him.

How rarely people in our materialistic culture have such experiences with God. How many people dwell on the surface, thinking about religion as just rituals and rules? But everything changes when we have a personal encounter with Him and experience His glory. When we know Him, everything changes!

How amazing to realize that He longs to make Himself known to us and fellowship with us as individuals. He is by our side in every situation. He longs to bless us, protect us, and provide everything we need. He will give us real freedom.

Seek to deepen your personal relationship with God.