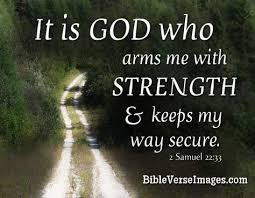 There isn’t a human on earth who hasn’t at one time or another been discontented, distressed, or in debt. Even at an early age, children and teenagers experience moments of being dissatisfied or fed up with school or rules. And people of all ages have unfortunately suffered heartache and anxiousness. This is the world we live in— this is the world that has always existed. So what’s a person to do? Do we just accept it and mope through life waiting for the sweet by and by?

NO, of course not. First of all, this is why Jesus is called our Savior. He came to save all who were/are perishing in this world. Faith in Jesus Christ changes everything. And as a Christian, you know this. But life can still be difficult, even as a born-again believer. So then what?

I suggest we learn from those who have gone before us. Specifically, let’s learn from David today. Here was a man who was forced to run for his life— after being hand-picked by God to be king. I have never had to run for my life, but I can relate to David in more ways than one. Like him, I have found great encouragement from God to press forward despite the obstacles. I have been surrounded by people in no better shape than myself, but discovered the joy of contagious faith. And time and time again, I have been delivered from the enemy’s plan.

David found himself running from the former king who wanted him dead, only to be surrounded by “everyone who was in distress, everyone who was in debt, and everyone who was discontented” (1 Samuel 22:2). When you pray and call out to God, the last thing you are hoping for is a bunch of people in worse condition than yourself. But the Bible says David “become captain over them.” He didn’t despise the broken people God sent him. He realized there’s something he had that they needed. And because David’s faith was contagious, these men became mighty warriors.

End of story? No, this isn’t a made-for-tv movie. This is real life. And just like our lives, David found himself alone again. An enemy attacked their homes and took all the women and children. And instead of being angry at their true enemy, David’s men turned on him. They wanted to stone him, which sounds ridiculous, but that’s what happens when the enemy finds a way to discourage people.

But David knew something we all need to remember:

This is our only option. This needs to be our daily option— our daily routine.

Life happens. We live in a world that is confused and lost, but we should never be! Despite the challenges that want to surround and overwhelm us and the despair of others in the same boat, YOU and I have a choice. We do not have to cave to the pressure. Even if left completely alone (everyone forsaking you), you can turn to God and encourage yourself in His faithfulness. This is what David did time and time again. We are privileged to have access to his journal (the Book of Psalms). David repeatedly found comfort in the Lord his God!

And notice, he encouraged himself. He didn’t wait for a pastor, a podcast, a service, a friend, or a quiet day on the couch binging on Netflix. No, David encouraged himself in the “I AM”— the One who said He would never leave us or forsake us.

David turned his thoughts, his words, and his heart toward God. He didn’t meditate on the problem. He meditated on the answer. He exercised his faith in the One who saved him (time and time before). This is our example. We have a Savior and He is faithful. Decide today (and every day) that no matter what may come, or who may come against you, YOU can encourage yourself in the Lord.

Joshua 1:7-8 (NIV) 7Be strong and very courageous. Be careful to obey all the law my servant Moses gave you; do not turn from it to the right or to the left, that you may be successful wherever you go. 8Do not let this Book of the Law depart from your mouth; meditate on it day and night, so that you may be careful to do everything written in it. Then you will be prosperous and successful.

The Law was to guide the new nation in the ways of God. Joshua, as their commander, was told to be careful to obey it all. If leaders do not follow God, they lead the people astray. But if they follow hard after God through obedience to His Word, many will be challenged to do the same. Joshua was encouraged to meditate on the words of the Law. He was supposed to talk about it all the time. Most of all, he was told to be careful to live it. We can talk about it and study it, but if that does not translate into living it then our words are misunderstood by the message our actions preach.

If Joshua would do these things, he was twice promised that he would be successful, and even prosperous. I don’t think the principle has changed. If we will do the same thing, we will have the same results.

Meditation upon the Word is a holy habit that is not much employed today. Most mature Christians will spend time reading the Word, speaking the Word, and applying it to their lives, but few meditate upon the passages they read. This often involves memorization. Take time to let the Word speak to you. Ask the Holy Spirit to make it come alive and apply it to your daily situations. The quantity of Scripture read is not as important as seeing the application to our lives. Look for God’s eternal truth in each passage you read.

Meditate on the Scripture for today. What is God saying to you?

“For he hath made him to be sin for us, who knew no sin; that we might be made the righteousness of God in him.” 2 Corinthians 5:21

In no sense is he ever a guilty man, but always is he an accepted and a holy one. What, then, is the meaning of that very forcible expression of my text? We must interpret Scriptural modes of expression by the words of the speakers. We know that our Master once said himself, “This cup is the new covenant in my blood;” he did not mean that the cup was the covenant. He said, “Take, eat, this is my body”—none of us conceives that the bread is the literal flesh and blood of Christ. We take that bread as if it were the body, and it actually represents it. Now, we are to read a passage like this, according to the analogy of faith. Jesus Christ was made by his Father sin for us, that is, he was treated as if he had himself been sin. He was not sin; he was not sinful; he was not guilty; but, he was treated by his Father, as if he had not only been sinful, but as if he had been sin itself. That is a strong expression used here. Not only has he made him to be the substitute for sin, but to be sin. God looked on Christ as if Christ had been sin; not as if he had taken up the sins of his people, or as if they were laid on him, though that were true, but as if he himself had positively been that noxious—that God-hating—that soul-damning thing, called sin. When the judge of all the earth said, “Where is sin?” Christ presented himself. He stood before his Father as if he had been the accumulation of all human guilt; as if he himself were that thing which God cannot endure, but which he must drive from his presence for ever.

For meditation: God regarded Christ crucified just as if he were sin, not Son. The substitutionary atonement is the key which enables the Christian to make use of the description “Just as if I’d never sinned.”

God made it clear: He desired to bless His people. But they were not to hoard these blessings. He wanted them to care for others, to have hearts overflowing with love. They were to love their neighbor as themselves. As Jesus said, this was second in importance only to loving the Lord with all their being (Matthew 22:36-38).

They had an opportunity to demonstrate this compassion during harvest time. If they were motivated by selfishness, they would keep all the crops for themselves. But God commanded them to show concern for others even while harvesting. They intentionally were not to reap a part of their fields. God wanted them to leave some behind for those less fortunate, the needy, and strangers.

These principles still are true. As you look around, ask God to give you His perspective. Souls are lost and dying in sin. Others suffer from physical, financial, or spiritual needs. You might have the resources they need. Think about all that God has given you and remember that He blesses you, so you might be a blessing to others.

Ask God to give you a heart of compassion, to open your eyes to ways you can help. Seek to be filled with His Spirit that you might overflow with love. As He leads, be ready to share from your resources, help the poor and needy, spread the Gospel, and change lives.

But since sexual immorality is occurring, each man should have sexual relations with his own wife, and each woman with her own husband.
1 Corinthians 7:2
DailyVerses.net