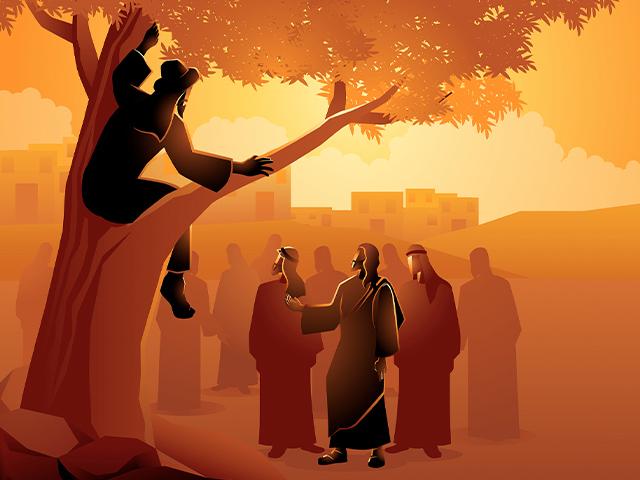 Forty years later, I can still hear my daughter singing about a “wee little man.”  Complete with motions, climbing up a sycamore tree, and Jesus looking up to see him, she knew the story by heart.

Luke 19:1-10 tells us Zacchaeus, a tax collector, was a short-statured man determined to see Jesus. Can’t you see him, weaving through rows of people, trying to get a glimpse of the famous teacher? Frustrated and unsuccessful, he chose another route. The man had spunk. He climbed a tree and disregarded the potential of splinters from rough branches, bird droppings, and pieces of bark clinging to his robe. Curiosity and tenacity ruled.

Then it happened. Jesus stopped. He noticed Zacchaeus.

“When Jesus reached the spot, he looked up and said to him, ‘Zacchaeus, come down immediately. I must stay at your house today.’” (Luke 19:5 NIV).

Jesus even called him by name and said he must go to his house. Could it be? Unexpected company and life-changing results were in store for Zacchaeus, who was regarded by the crowd, and Jesus, as a sinner.

Every morning we have that same invitation. Jesus says, ‘I’m coming to your house today.’ Perhaps we meet Jesus reading online devotions, or our personal quiet time with our Bible, and in prayer. Though we may be Christians, we are sinners, saved by His grace. Jesus never stops seeking our attention. He wants to come. He delights in our company.

Are we delighted or in a hurry? Jesus said, “Zacchaeus, come down immediately. I must stay at your house today.” Not “I’d like to,” but He must come. He knows what He has for us:

We don’t need to climb a tree and get splinters. While we’re still dressed in pajamas with a coffee cup in hand, Jesus wants to come to our house and meet us at the start of our day. Luke 19:6 tells us Zacchaeus’ response was to welcome Him gladly. Zacchaeus looked and it was life-changing. Are you willing to do the same and take the time to listen?

Transformation From the Inside Out

The story of Zacchaeus beautifully captures the message of the gospel and the transforming power of God’s grace. Zacchaeus wasn’t a popular person at all. As a chief tax collector, his job was to gather taxes for the Roman government. This profession was notorious for corruption. Not only was he a man of great wealth based on the job he had, but he may well have been lonely—generally rejected by his own people.

Zacchaeus was small in stature as well as being small in character. But he wanted to see Jesus, so he climbed a tree to see over the crowd. As Jesus approached, he picked out Zacchaeus and invited himself to the man’s home. Certainly this would have upset the townspeople, but Jesus saw something in Zacchaeus that only God can see in a person. He saw the man he could be. And Zacchaeus’s transformation was dramatic. His salvation came not because he returned a large part of his riches, but because he received the grace and mercy of Jesus—and it changed the way he lived. His transformation was public and personal and urgently important.

From sinner to seeker to ­follower, Zacchaeus became an example of the change that takes place in our lives because of Christ. Yes, the same happens in our lives too, because a change of heart leads to a change of character and ­behavior.

Thank you, Jesus, for your transforming grace and mercy. Change us from the inside out so that our words and actions rightly reflect your ongoing work in our lives. Amen.

“O unbelieving and perverse generation,” Jesus replied, “how long shall I stay with you and put up with you?” Luke 9:41

There is much written today about how the world has lost touch with God and morality. It’s easy to view the past with rose-tinted glasses, to believe in “the good old days” or reminisce about a golden era.  We do this in the Church all the time, often pointing to one practice that, if resurrected, would surely turn this generation around.

“If only the women still wore head coverings in church… ”

“If only we sang ancient hymns… ”

“If only young men and women got married earlier… ”

“The children now love luxury; they have bad manners, contempt for authority; they show disrespect for elders and love chatter in place of exercise. Children are now tyrants, not the servants of their households. They no longer rise when elders enter the room. They contradict their parents, chatter before company, gobble up dainties at the table, cross their legs, and tyrannize their teachers.”

How often have I been tempted to mutter these words when encountering today’s teenagers? But this quote is attributed to Socrates by Plato. Apparently, teens weren’t doing so well in the ancient world either. The fallen nature of man has followed us through the ages, plaguing the youth and old alike. Our broken nature manifests itself in so many ways… from the darkest sins to our lack of basic manners and courtesy.

Jesus himself seemed to grow weary of the sins of his own day. I imagine the opening scripture was expressed with a mix of sadness and righteous anger.

But what is the rest of the story? Even as his sinful followers surrounded him, Jesus healed the spiritual and physical afflictions of a possessed boy. We see here that going back to the “good old days” doesn’t have the power to save us. It’s the person of Jesus Christ who saves. This is the miracle of Easter: The incredible mercy of a God who would be justified in staying angry forever after the golden era of Eden went terribly wrong. He hears our cries for redemption – weak though they may be – and saves us.

Is the world worse today than it was yesterday? Does it matter? God’s patience and mercy for our “perverse and unbelieving generation” reveal the depths of his divine love. And those forgiven the most sins have the greatest number of reasons to rejoice.

It is written: ‘As surely as I live,’ says the Lord, ‘every knee will bow before me; every tongue will acknowledge God.’
Romans 14:11
DailyVerses.net