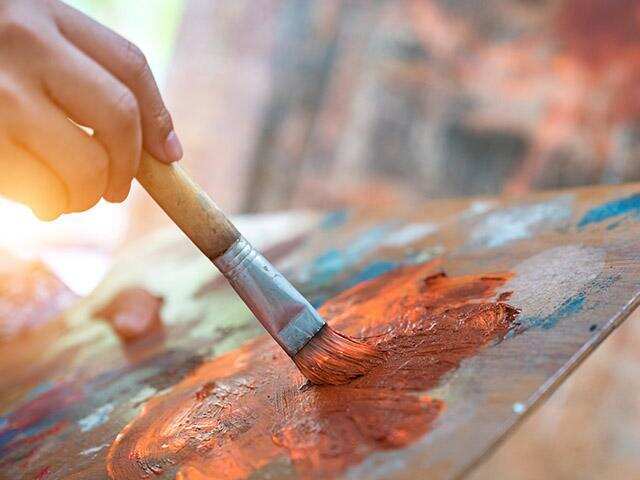 1 Kings 6:7 7In building the temple, only blocks dressed at the quarry were used, and no hammer, chisel or any other iron tool was heard at the temple site while it was being built.

Imagine the precision that had to be used to have the stones perfectly fit when they arrived at the temple site! Three-dimensional exactness had to be obtained at the quarry, for no pounding of any iron tool was to be heard at the site. Each block was custom made for an exact location to fit with the blocks beside and below.

Peter refers to believers as living stones (1 Peter 2:4-5). What kind of parallel can we see here? Jesus is the builder of the eternal temple of God, as the author of Hebrews declared (Hebrews 3:3-4). He must shape us to perfectly fit into the place God has for us and that includes fitting in with those around us. Each of us has a calling and a place in the temple. But what does this noiseless activity represent?

The pounding and shaping, the noisy activity, should go on outside the temple site. When we gather to worship, it is not the time to hash out our differences. There we quietly behold His glory or sing His praises. There, our focus is not on our fit with the stone next to us but the wonder of our Savior. O come let us adore Him. Turn your eyes upon Jesus.

The hammering and shaping should go on in the quarry. One on one with the Lord, we should allow ourselves to be shaped. The places we do not fit with the other living stones must be chiseled away. That noisy and often painful activity goes on in the quarry with Jesus so that we do not disturb the focus of others as we gather to worship corporately. Are you letting Him remove from you the protrusions in your life that keep you from fitting perfectly with the rest of the building?

Take time alone with God to let Him make some reductions in you so that you fit with the other living stones.

Streams in the Desert – June 13

Peace I leave with you; my peace I give to you; I do not give it to you as the world does. Do not let your hearts be distressed or lacking in courage. (John 14:27)

Two painters each painted a picture to illustrate his conception of rest. The first chose for his scene a still, lone lake among the far-off mountains.

The second threw on his canvas a thundering waterfall, with a fragile birch tree bending over the foam; and at the fork of the branch, almost wet with the cataract’s spray, sat a robin on its nest.

The first was only stagnation; the last was rest.

Christ’s life outwardly was one of the most troubled lives that ever lived: tempest and tumult, tumult and tempest, the waves breaking over it all the time until the worn body was laid in the grave. But the inner life was a sea of glass. The great calm was always there.

Rest is not a hallowed feeling that comes over us in church; it is the repose of a heart set deep in God.
—Drummond

My peace I give in times of deepest grief,
Imparting calm and trust and My relief.

My peace I give when prayer seems lost, unheard;
Know that My promises are ever in My Word.

My peace I give when thou art left alone—
The nightingale at night has sweetest tone.

My peace I give in time of utter loss,
The way of glory leads right to the cross.

The restoration and conversion of the Jews

Israel is to have a spiritual restoration or a conversion. Both the text and the context teach this. The promise is that they shall renounce their idols, and, behold, they have already done so. ‘Neither shall they defile themselves any more with their idols’ (Ezekiel 37:23). Whatever faults the Jew may have besides, he certainly has no idolatry. ‘The Lord thy God is one God,’ is a truth far better conceived by the Jew than by any other man on earth except the Christian. Weaned for ever from the worship of all images, of whatever sort, the Jewish nation has now become infatuated with traditions or duped by philosophy. She is to have, however, instead of these delusions, a spiritual religion: she is to love her God. ‘They shall be my people, and I will be their God’ (verse 23). The unseen but omnipotent Jehovah is to be worshipped in spirit and in truth by his ancient people; they are to come before him in his own appointed way, accepting the Mediator whom their sires rejected; coming into covenant relation with God, for so the context tells us—‘I will make a covenant of peace with them’ (verse 26), and Jesus is our peace, therefore we gather that Jehovah shall enter into the covenant of grace with them, that covenant of which Christ is the federal head, the substance, and the surety. They are to walk in God’s ordinances and statutes, and so exhibit the practical effects of being united to Christ who has given them peace. All these promises certainly imply that the people of Israel are to be converted to God, and that this conversion is to be permanent.

For meditation: Do you find time in your theology and prayers for the Jews? Join the apostle Paul and pray (Romans 10:1) that more and more Jewish people will accept the new covenant which God has made, that he will be their God and that they will be his people (Hebrews 8:8,10).

For to us a child is born, to us a son is given, and the government will be on his shoulders. And he will be called Wonderful Counselor, Mighty God, Everlasting Father, Prince of Peace.
Isaiah 9:6
DailyVerses.net