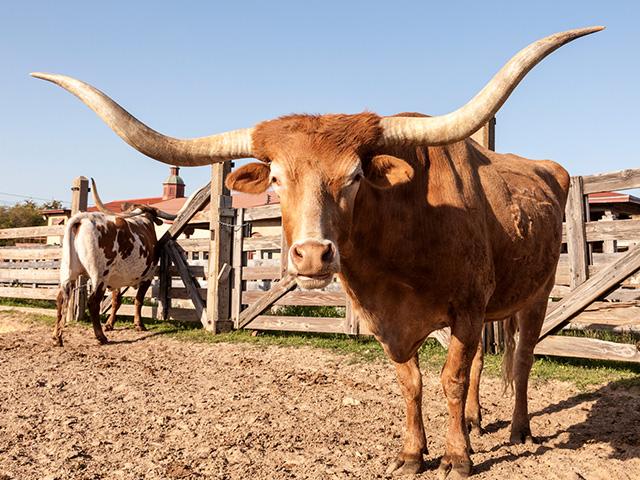 It was the Saturday after Thanksgiving and we found ourselves traipsing the Fort Worth Stockyards. Known for its brick walkways and wooden corrals, what was once host to Texas’ livestock industry, was now a piece of western heritage, lit up with Christmas lights and garlands of red and green. Throngs lined the sidewalks to catch a glimpse of the twice-daily cattle drive, while others bustled in and out of shops and restaurants.

We had barely passed the petting zoo and the carriage rides when our little boy stopped at the sight of a life-sized maze. In bright letters, it boasted a 5,400 sq. ft. labyrinth of wooden passageways constructed to resemble an actual cattle pen. Unable to look away at the immensity of it, he quickly got our permission and stood in line.

“See if you can find the letters M – A – Z – E before you exit,” the attendant bellowed above the noise of the busy street as she handed him a ticket. Accepting the challenge, he and his older sister took off.

Clutching my camera, I followed my husband as we climbed a wooden staircase that promised a scenic overlook. The landing was crowded but I inched my way to the edge of the stiff railing. I gasped at the view below. It was a complete unhindered layout of the maze. I looked for my kids to see if they had made any headway. They hadn’t. But from atop the overlook, the maze was crystal clear. I felt like a child in a restaurant who had been handed a kids’ menu with a maze to complete. With an imaginary crayon, I checked off all four letters and exited the jumbled mess in record time.

I snapped from my pretense when I heard what sounded like the names of my little ones. My husband had joined the chorus of parents flocking the overlook, all issuing well-meaning orders to their youngsters.  “Turn left!” “Turn right!” “Enter here.” “Not there.” On and on the cries overlapped. Some listened, others didn’t. Ours yelled back at us that they wanted to solve the puzzle at their own pace. So we watched patiently as they zipped in and out the wooden trails and finally made their way out.

“It was harder than I thought, mom!” my son exclaimed.

“Come with me.” I grabbed his hand and led him until he was 30 feet taller.

“Wow!” he exhaled, as he gaped at what looked like an aerial photograph. The maze was now no different from ones he’d completed in a puzzle book.

We stood there for a few minutes drinking in the view.

I thought to myself that God must have a picture quite similar to this. His perspective is vast and perfect, while mine is inaccurate and limited. He is not stumped by dead ends, blind alleys, or patterns that repeat. He is never frustrated, lost or confused. His ways are higher, and His conclusions are right. He sees the end from the beginning (Isaiah 46:10) and nothing is hidden from His sight. And He wants to lead me.

1 Chronicles 16:8-11 8Give thanks to the LORD, call on his name; make known among the nations what he has done. 9Sing to him, sing praise to him; tell of all his wonderful acts. 10Glory in his holy name; let the hearts of those who seek the LORD rejoice. 11Look to the LORD and his strength; seek his face always.

Chronicles records the story of the ark coming to Jerusalem. The first time they tried to bring it their own way, and Uzzah died. The second time they did it according to the Word of the LORD. There was great rejoicing. David danced so all-out that his wife despised him. Musicians were appointed to play before the ark on a regular basis. David gave gifts of food to everyone. It was truly a festive occasion.

In this psalm David commands us to give thanks to the LORD, to call on His name and to tell the nations what God has done. He is commanding us to send out missionaries. We are to sing to Him! We often sing about Him, telling of His wonderful acts, but we need to sing to Him also. We are to glory in His holy name. His name is the sum of His attributes. Glory in all that God is! If you seek the LORD, your heart should rejoice.

Then David told a lesson that was just reinforced. He sought God when the Philistine army came against Israel. The first time God directed them one way to victory. The second time God directed them in a different way, and they defeated the enemy again. Look to the LORD and His strength; seek His face always. That is something Saul did not do, but David was determined to do.

Consider: Are you as determined as David to rely on God’s strength and to seek His face always?

And therefore will the Lord wait, that he may be gracious unto you… blessed are all they that wait for him (Isaiah 30:18).

He has inconceivably glorious purposes concerning every one of His children. And you ask, “How is it, if He waits to be gracious, that even after I come and wait upon Him, He does not give the help I seek, but waits on longer and longer?” God is a wise husbandman, “who waiteth for the precious fruit of the earth, and hath long patience for it.” He cannot gather the fruit till it is ripe. He knows when we are spiritually ready to receive the blessing to our profit and His glory. Waiting in the sunshine of His love is what will ripen the soul for His blessing. Waiting under the cloud of trial, that breaks in showers of blessings, is as needful.

Be assured that if God waits longer than you could wish, it is only to make the blessing doubly precious. God waited four thousand years, till the fullness of time, ere He sent His Son. Our times are in His hands; He will avenge His elect speedily; He will make haste for our help, and not delay one hour too long.
–Andrew Murray

The Fix for Our Faulty Vision

“But the LORD said to Samuel, ‘Don’t judge by his appearance or height, for I have rejected him. The LORD doesn’t see things the way you see them. People judge by outward appearance, but the LORD looks at the heart.’” 1 Samuel 16:7 (NLT)

“See me, Mommy! See me!” my youngest daughter hollered from the top of the slide on that long-ago summer’s day.

I smiled at her singsong plea and waved my arms in acknowledgment as she launched her slender frame down the slanted chute.

Meeting her at the bottom of the slide with a hug, I then followed my little girl across the playground to the faded blue swingset.

“See me, Mommy! See me!” she begged again as she pumped her spindly legs up and down with a giggle.

This little giggler wasn’t the first preschooler to solicit my eyes as she explored the world around her. Four children before her had invited my gaze, but their pleas had been wrapped in a different phrase.

“Watch me, Mommy! Watch me!” my first four had demanded when they’d sought applause for their accomplishments or acknowledgment for their efforts.

“Watch me, Mommy! Watch me!” they’d cried as they dangled from monkey bars and somersaulted across the grass, hopped on one foot or danced in the kitchen.

At the time, I didn’t consider my youngest one’s plea to be any different than the cry of the siblings who had come before her. But looking back now, I believe my daughter’s unusual word choice was more than a matter of mere linguistics. It was the cry of her fifth-born heart.

Planted in a house swelling with big brothers and sisters, our littlest girl was used to being watched; she wanted to be seen. The difference may seem slight, but it’s significant. To watch requires our eyes, but to see engages our heart.

God makes this distinction clear when He sends the prophet Samuel on a mission to anoint a new king. Aware that human view often falls short of God’s vision, the Lord commands Samuel to look past the visible veneer to the discernible interior.

“But the LORD said to Samuel, ‘Don’t judge by his appearance or height, for I have rejected him. The LORD doesn’t see things the way you see them. People judge by outward appearance, but the LORD looks at the heart.’” (1 Samuel 16:7)

In its original language, the word used for “see” is ra’ah, which means “to see with the mind, to perceive, to know.” This kind of sight involves more than hasty impressions; it requires an astute pause of perception.

Throughout the Gospels, Jesus shows us what it looks like to emulate God’s vision.

When He meets an outcast woman at the well in Samaria, Jesus sees more than a hopeless harlot. He spies a broken daughter thirsty for abundant life. (John 4:1-42)

When He notices Zacchaeus in the tree, Jesus sees more than a despised tax collector. He recognizes a man longing for a place to belong. (Luke 19:1-10)

When He encounters Peter on the shores of the Sea of Galilee, Jesus sees more than a brash fisherman. He spots a bold disciple upon whom He will build His church. (Matthew 4:18-20; Matthew 16:18)

I want to see like Jesus does, but I’ll be honest — it’s not easy. On my own, I’m prone to peer at people through eyes of apathy or curiosity, carelessness or judgment.

Thankfully, tucked in the folds of Scripture is a fix for my faulty eyes. Keep “looking to Jesus,” Hebrews 12:2 encourages (ESV).

When we fix our eyes on Jesus — focusing on His character and attending to His presence, acknowledging His authority and agreeing with His Word — our optics are refined.

God’s grace becomes the lens through which we view the world around us, and His love is the plumb line for our perceptions. In time, our habits of shallow scrutiny are replaced by the practice of sagacious sight.

But best of all, when we glue our gaze to our Savior, we become seers instead of watchers. And we make the heart of heaven visible on the dust of earth.