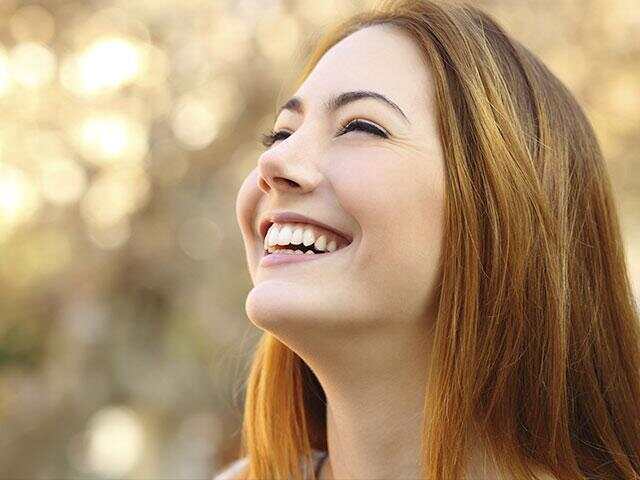 I remember the song from Children’s Church, ”The Joy of the Lord is My Strength,” and the verse of laughter when they sing, “Ha Ha Ha Ha Ha,” and so on. What a blessing, hearing the pure unadulterated joy and laughter coming from those precious children as they rejoice in the Lord. Yes, the joy of the Lord is our strength. Nehemiah 8:10 (NLT)

But do we, as adults, share the joy? How long has it been since we’ve recognized His joy in our own lives, and how does that joy manifest itself?

I remember the story in the Bible when King David was returning the Ark of the Covenant to Jerusalem. The joy King David felt as he ushered in the presence of the Lord was almost more than he could contain.

“And David danced before the Lord with all his might, wearing a priestly garment. So David and all the people of Israel brought up the Ark of the Lord with shouts of joy and the blowing of rams’ horns.” 2 Samuel 6:14-15 (NLT)

It goes on to say that King David leaped and danced before the Lord. In those days, the presence of the Lord, the God of the universe, rested upon that one spot, the Ark of the Covenant. Today, that same presence of the Lord rests within us. Oh, the joy that comes when we recognize this fact.

I’ve personally seen this joy manifested when a person humbly asks Jesus to forgive their sins and come into their heart. I have seen people shout for joy upon receiving their salvation and praise God upon coming out of the water after baptism.

“Then I will rejoice in the Lord. I will be glad because he rescues me” Psalm 35:9 (NLT)

I remember as a boy of 17, receiving the baptism of the Holy Spirit and the joy that He brought into my life. I spoke in tongues and laughed for the rest of the night!

Some churches have exuberant praise and worship services where people sing, clap, dance, laugh, and release themselves to rejoice in their Lord’s presence, regardless of what onlookers might think. The Lord loves to see their joy and love for Him displayed in such a manner. But He also enjoys the person whose joy is so deep and personal, that it’s expressed by sitting quietly as they bask in their joy, which resides deep within.

Sometimes the cares of life will weigh us down and it would appear that joy is nowhere to be found. And yes, there is a time for grief and sorrow. Even the Lord Jesus experienced it as He wept over Jerusalem. But when the day is done, the house is quiet, and you relax in the comfort of your dimly lit room, turn your thoughts away from the cares of the day and toward your Lord who lives within you.

Realize that the very presence of God, before whom King David danced, is with you and has shared this day with you. Rejoice, for you possess the Lord, and He possesses you. The communication and fellowship that you have with the Lord is your secret treasure. No one can understand or share in the intimacy that is yours and His alone. The sacredness of this treasure, the presence of God in and with you, is your source of joy and strength. This is not joy as the world knows it, but it’s the kind of joy that comes only from God through the Holy Spirit, “joy unspeakable and full of glory.” (1 Peter 1:8)

“I have told you these things so that you will be filled with my joy. Yes, your joy will overflow!” John 15:11 (NLT)

It is His will that you live and breathe in the overflow of joy that comes from Him. Acknowledge and encourage His presence to be with you in word and in Spirit so that joy, His joy in you, becomes a lifestyle. The Apostle Paul wrote,

Allow the fruit of joy to grow and manifest itself in your life. Your joy in the Lord is your great source of strength, and no bad report, circumstance, or person can take it away from you!

1 Chronicles 19:13 13Be strong and let us fight bravely for our people and the cities of our God. The LORD will do what is good in his sight.”

After David was established as king, he heard about the death of the king of the Ammonites. He sent a group of Israelites to express sympathy. The new king’s advisors suggested that this display of sympathy was really to spy out the land. They cut off the beard and robes of the ambassadors, a sign of great humiliation in that day, and sent them back. When the Ammonites realized this might cause retaliation they hired the Arameans as mercenaries.

David’s general, Joab, led the troops against them but the two enemy armies were able to surround Joab. Joab divided his army and put one group to fight in front and the other behind. Whichever group was successful was to turn and help the others. That is when the verse we have today was uttered. The odds did not look good. Joab reminded them they were fighting for the people and the cities of their God. That made it personal for each soldier. It wasn’t just about their own life; it was for their family, too.

We realize our battle affects many more than just us personally. How many fallen had forgotten how their entire family and those of their city are affected by their battle? We do the best we can in the situation God has placed us. We rely on His strength. Then we trust that God will do what is good in His sight. God did help them, and both enemy armies retreated. The LORD did what was good in His sight.

Remember: Don’t forget that your spiritual battle is for your family and your city. Encourage yourself with the fact that if you do your part, the LORD will do what is good in His sight.

Believing is Seeing – Streams in the Desert – July 24

Then believed they his words; they sang his praise. They soon forgot his works; they waited not for his counsel; but lusted exceedingly in the wilderness, and tempted God in the desert. And he gave them their request; but sent leanness into their soul (Psalms 106:12-15).

We read of Moses, that “he endured, as seeing him who is invisible.” Exactly the opposite was true of the children of Israel in this record. They endured only when the circumstances were favorable; they were largely governed by the things that appealed to their senses, in place of resting in the invisible and eternal God.

In the present day there are those who live intermittent Christian lives because they have become occupied with the outward, and center in circumstances, in place of centering in God. God wants us more and more to see Him in everything, and to call nothing small if it bears us His message.

Here we read of the children of Israel, “Then they believed his words.” They did not believe till after they saw–when they saw Him work, then they believed. They really doubted God when they came to the Red Sea; but when God opened the way and led them across and they saw Pharaoh and his host drowned–“then they believed.” They led an up and down life because of this kind of faith; it was a faith that depended upon circumstances. This is not the kind of faith God wants us to have.

The world says “seeing is believing,” but God wants us to believe in order to see. The Psalmist said, “I had fainted, unless I had believed to see the goodness of the Lord in the land of the living.”

Faith is to believe what we do not see, and the reward of this faith is to see what we believe.
–St. Augustine

Children brought to Christ, not to the font

‘Suffer the little children to come unto me, and forbid them not: for of such is the kingdom of God.’ Mark 10:14

We can say with the apostle John, ‘I have no greater joy than to hear that my children walk in truth.’ We continue, therefore, to bring them to Christ by daily, constant, earnest prayer on their behalf. As soon as they become of years capable of understanding the things of God, we endeavour to bring them to Christ by teaching them the truth. Hence our Sabbath schools, hence the use of the Bible and family prayer, and catechizing at home. Any person who shall say, ‘Do not teach your children; they will be converted in God’s own time if it be his purpose; therefore leave them to run wild in the streets,’ will certainly both ‘sin against the child’ and the Lord Jesus. We might as well say, ‘If that piece of ground is to grow a harvest, it will do so if it be God’s good pleasure; therefore leave it, and let the weeds spring up and cover it; do not endeavour for a moment to kill the weeds, or to sow the good seed.’ Why, such reasoning as this would be not only cruel to our children, but grievously displeasing to Christ. Parents! I do hope you are all endeavouring to bring your children to Christ by teaching them the things of God. Let them not be strangers to the plan of salvation. Never let it be said that a child of yours reached years in which his conscience could act, and he could judge between good and evil, without knowing the doctrine of the atonement, without understanding the great substitutionary work of Christ. Set before your child life and death, hell and heaven, judgment and mercy, his own sin, and Christ’s most precious blood; and as you set these before him, labour with him, persuade him, as the apostle did his congregation, with tears and weeping, to turn unto the Lord.

For meditation: Christian parents should bring their children up ‘in the nurture and admonition of the Lord’ (Ephesians 6:4). This may be harder in non-Christian marriages when only one of the partners becomes a Christian, but it is not hopeless (1 Corinthians 7:14); Timothy was proof (Acts 16:1; 2 Timothy 1:5; 3:15).

Because you know that the testing of your faith produces perseverance.
James 1:3
DailyVerses.net