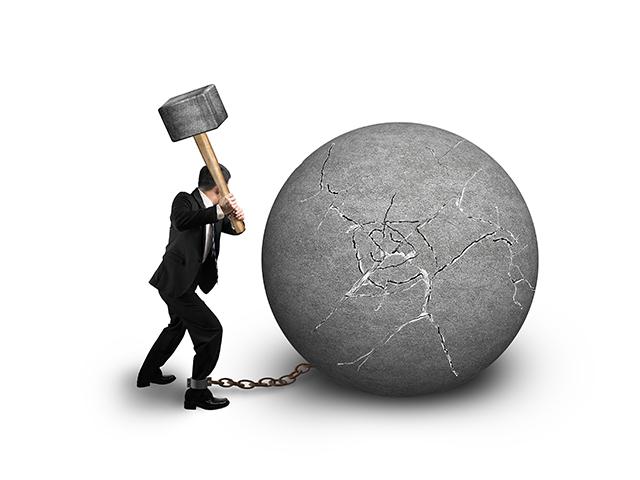 “… My grace is sufficient for thee: for my strength is made perfect in weakness.” (2 Corinthians 12:9 KJV)

“You’ll never move that rock, Mikey, it’s too big.” Not very encouraging, but Mikey had grown used to hearing it from his friends. Since moving to their home when he was only three, Mikey hated that rock and wanted his dad to move it to make room for a swing set. His dad told him if he could move it, he would buy him one.

Mikey was six then, and he spent every day trying to move that rock. Sometimes, he tried only a couple of times when he went outside to play. Other days, he’d try for hours. He first started with the little hammer in the tool kit he got for Christmas. When that didn’t work, he used his dad’s hammer. Still not successful, he saved his birthday money and bought a three-pound sledgehammer. Mikey had a boat-load of determination. Some might call it a stubborn streak. He never would give up on moving that rock.

As he entered his teen years, Mikey began to accept the fact that rock would probably always be there. Nevertheless, he didn’t give up. By age 14, he’d bought himself a 10-pound sledgehammer. When he made the varsity football team, primarily because of his size and strength, he decided that rock could be useful in his training regiment. Each day he would spend an hour jumping on the top of the rock and pounding 30 licks with his hammer. He would then jump down and back up again and do another 30. By now, he had long since forgotten about the swing set.

On signing day in his senior year, he signed a scholarship letter of intent. It was for a full ride to one of the most prominent football universities in the south. Later that night at supper, he asked his dad, “Are you ever going to move that rock?”

His dad responded, “Why should I? Look what it did for you.”

“What do you mean, Dad?” Mikey asked.

With a grin, his dad began to explain. “Mikey, since you were six years old you have wanted that rock moved. You worked at it every day, even breaking a few hammers along the way. That rock never moved, but it did something for you I never could’ve. It was that rock that made you strong. Although you hated it, it’s the very reason you’re where you are today.  If not for that rock, you would’ve spent your time playing video games or something. Instead, now you’re about to live out your dream of playing college ball. It’s your hard work, determination, strength, and perseverance that got you there. That rock you hated so much did all of that for you far better than I ever could have. I’m proud of you, son.”

Sometimes, it may be the thing that hinders us the most, that molds us into what God wants us to be. The trials we go through breed compassion for others going through them. They create in us a desire to alleviate someone else’s suffering. They cause us to want to encourage others in their struggles. Those things we hate and don’t think we’ll ever survive are the very things that make us who we are.

Keep pounding the rocks in your life. Have a blessed day in the Lord!

Job 23:10-12 10But he knows the way that I take; when he has tested me, I will come forth as gold. 11My feet have closely followed his steps; I have kept to his way without turning aside. 12I have not departed from the commands of his lips; I have treasured the words of his mouth more than my daily bread.

Job’s friends continued to insist that he is being punished for his sin. They kept telling him that the wicked are always punished and the righteous are always blessed. Job told them that this was just not true. Many wicked live in prosperity and die in peace. Many righteous suffer without a cause that can be determined. He told them their counsel was just plain lies. We’d like to think that judgment for the wicked is always swift and observable, but God often reserves judgment for the Day of Judgment.

Job had a firm conviction that he had not intentionally committed anything for which the Lord would deal like this with him. He had retraced his actions, thought through his life, and not been able to find anything for which God would be disciplining him. How few of us can make the same statement! Of course, he had sinned, but he had not intentionally rebelled against God’s will.

Instead of punishment, he now saw this as a refining process, just as gold is refined by fire. We will see this idea again throughout the Scriptures, but this is the first mention of it. What words is Job referring to when he speaks of ‘the words of God’s mouth’? He may have had an oral report of Adam to Abraham but as yet there were no written accounts that we know of, with the possible exception of the Book of Enoch. Did Job once hear the still small voice of God? He complained that no matter where he turned God was not to be found. Perhaps he had found God in the past in that voice within his heart, but now the heavens were silent. He treasured the words of God more than his daily food. That was what led to such a righteous life. There will be times in our lives when we are walking with God and yet we do not hear His voice. We must proceed by faith, knowing He is refining and teaching the children upon whom He has fixed His love.

When Sin Bubbles Up – Crosswalk the Devotional –

“Therefore, there is now no condemnation for those who are in Christ Jesus, because through Christ Jesus the law of the Spirit of Life has set me free from the law of sin and death.”  Romans 8:1-2

A few weeks ago, after realizing I had somehow missed reading this children’s classic as a child, I found myself speeding through the entire Anne of Green Gables series. The books captivated me, and for good reason. Written in the early twentieth century by Canadian author Lucy Maud Montgomery, the series chronicles the life of red-headed Anne Shirley, an orphan adopted by a brother and sister pair who really wanted a little boy to help on their farm. Eventually, they learn to love the little girl brought to them, as do all readers of Montgomery’s classic. Anne is a true literary heroine. We identify with her weaknesses: her spiritedness, quick-temper and vanity, and we strive for her strengths: bravery, generosity, and a heart overflowing with love for life and people.

As I read through the books, I was struck with the number of times Montgomery used Anne’s character to illustrate deep truths about the human condition. There were many examples, but one stood out in particular to me.  After being picked up from the train station by Matthew, Anne begins describing her life in the orphanage. Realizing she was exaggerating just how bad things were, Anne apologizes, saying, “It’s so easy to be wicked without knowing it, isn’t it?”

Indeed, it is. Throughout the Green Gables series, Anne repeatedly found herself unexpected moments of “wickedness,” forced to repent to neighbors, family and friends for some fiery retort, vain action or other impulsive sin. We can all relate to Anne- I know there are days I have to apologize over and over for the same sin- it just somehow keeps “bubbling up” in me.

The Apostle Paul dealt with this too. In his letter to the church in Rome, he wrote “For what I do is not the good I want to do; no, the evil I do not want to do–this I keep on doing” (Romans 7:19). What causes us to do the very things we don’t want to do? Why does our sin seem to bubble up in us—overflowing like a pot of boiling water? Paul understood: it is our indwelling, sinful nature fighting against our desire to do what is good. He goes on to say:

“For in my inner being I delight in God’s law; but I see another law at work in the members of my body, waging war against the law of my mind and making me a prisoner of the law of sin at work within my members. What a wretched man I am! Who will rescue me from this body of death?”

Thankfully, Paul’s question is rhetorical; he knows the answer. “Thanks be to God – through Jesus Christ our Lord!”  After acknowledging God to be our ultimate rescuer from sin, he writes some of the most encouraging verses of scripture found in the Bible, reminding us that through Christ’s death on the cross we have all we need to fight the wickedness that bubbles up in us.

“No, in all these things we are more than conquerors through him who loved us.” Praise God! Our sinful nature is no match for the redemptive power of the cross.  Yes, as Anne said, it is easy to be wicked- in fact, it’s unavoidable. Thankfully, Christ has already taken the punishment for our wickedness, and even more- he has credited his righteousness to us, giving us all the means we need to conqueror the sin in our lives.

Jesus was put to death on a Friday. And he rose from the dead on the following Sunday. The Bible tells us quite a bit about those two days, which we now call Good Friday and Easter Sunday. But what about the in-between day, Holy Saturday? The Bible says next to nothing about it.

That leaves us to wonder. What was going on with Jesus on Saturday? He was dead. His lifeless body lay in a stone tomb. We tend to assume that his spirit was now with God in heaven, or paradise, as Jesus implied while he was dying on the cross (Luke 23:43, 46). But we aren’t told anything more.

But the psalm doesn’t end there. It turns to focus on God’s love and salvation. Did Jesus’ spirit then also say, “But I trust in your unfailing love”? And as darkness surrendered to light on Sunday morning, did Jesus praise his Father with more words from this psalm: “My heart rejoices in your salvation”?

Maybe Jesus gives more meaning to this psalm than we have realized.