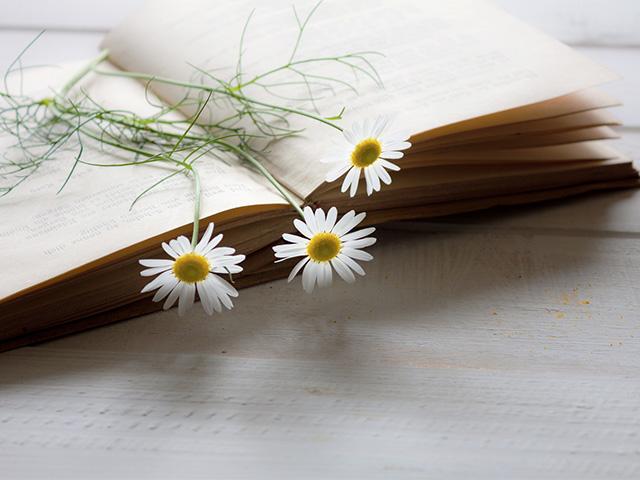 God desires to be a part of our everyday lives. He longs to show His love for us in special ways. If we will take the time, He will surprise us with special gifts of His love throughout our day.

Recently, this happened to a friend of mine. She took the time to find God. No, she didn’t just get up early in the morning and go outside to sit under a large, budding oak tree. She didn’t just stop and smell the fresh spring breeze and listen to the birds singing their songs of praise to God. She didn’t meditate all day while the warmth of the sun caressed her smiling face. She began her day as she always does — she spent time in the Word and then allowed God to show up in any part of her day that He chose. She went to work, and there were special surprises for her.

The Scripture she read that morning was from the Song of Solomon [Song of Songs in some versions]. It was a precious Scripture that she took with her in her heart. As she entered the building where she works, she saw something on the table in the lobby. She decided that she would pick up the small object and throw it away. She took pride in the area where she works and simply wanted to keep things looking nice. But to her surprise, it was a small flower. Now you say, “What’s the big deal?” Well, here is the Scripture that God gave her that morning:

“For the winter is past, and the rain is over and gone. The flowers are springing up, and the time of singing birds has come, even the cooing of turtledoves” (Song of Solomon 2:11-12, The Book).

It meant so much to her. She giggled and said, “Thank you, Papa” (as she always did when speaking to her heavenly Father) and kept right on walking. God was speaking to her heart about His great love for her. He was sharing with her that just as it was beginning to be spring in the natural realm, in the spiritual realm she was starting into her own springtime. And as we all know, flowers are a sign of spring.

God had allowed someone to leave a special, little flower on that table so that as she entered the building she would discover it and feel His great love for her. Her heart was greatly touched by this incident, and I felt so blessed to be a part of it. I had been right behind her when she walked into the building that morning.

As I thought of how special that moment seemed to her (not knowing about the Scripture God had given her), I knew something very wonderful was happening. As I stepped into the elevator, God spoke to my heart and said, “She took the time to find ME.” She had taken the time to find God. She was continuing the day as we all have to do, working and taking care of family, yet this moment did not escape her.

“Oh, that we might know the LORD! Let us press on to know him! Then he will respond to us as surely as the arrival of dawn or the coming of rains in early spring” (Hosea 6:3, The Book).

Needless to say, I took the rest of the day to look for God. I made sure I gave eye contact to everyone I met and shared a kind word and a smile. I wanted to find God in my day, and I wanted to be God’s love to someone who might need to see Him in a tangible way.

We can find God. We can feel His love in wonderful ways. We don’t need to think that He is millions of miles away and too busy to care about our special needs each day.

Job 40:6-8 6Then the LORD spoke to Job out of the storm: 7“Brace yourself like a man; I will question you, and you shall answer me. 8“Would you discredit my justice? Would you condemn me to justify yourself?

Once Job had finished justifying himself, his three friends said no more. A younger man then spoke up. He told Job the thing that he had done wrong was to justify himself rather than God. The young man, Elihu, insisted that God’s character was unquestionable.

Then God showed up. He had a few questions to ask Job. His questions served one purpose, to show that God is all-knowing and we are not. We can’t question what He allows because we have so few facts. He sees every aspect in the past, present, and future. How dare we question the character of the Almighty who moment by moment gives us life!

If there was a sin in Job’s response to his condition, it was to justify himself and thereby accuse God. In justifying himself, he was saying that God had made a mistake. True, his friends drove him to it, but he yielded to the temptation to make himself look good, and by contrast said that God was doing something wrong. “Would you condemn me to justify yourself?” God asked.

In times of difficulty, when we cannot understand the reason or purpose for the struggle in our lives, we can count on the integrity and justice of God. The one thing we dare not do is say that God is unjust in His dealing with us. Would you discredit His justice? We must proceed in faith, knowing that our understanding is limited and His is infinite.

Remember: God can take it when we question Him. He understands our weakness. Just don’t push it too far, especially as a poor testimony before others. God may question you.

“How many are mine iniquities and sins? Make me to know my transgression and my sin.” Job 13:23

“Tell me how I can feel the need of my Saviour.” The first advice I give you is this: Particularise your sins. Do not say “I am a sinner;” it means nothing; everybody says that. But say this, “Am I a liar? Am I a thief? Am I a drunkard? Have I had impure thoughts? Have I committed unclean acts? Have I in my soul often rebelled against God? Am I often angry without a cause? Have I a bad temper? Am I covetous? Do I love this world better than the world to come? Do I neglect prayer? Do I neglect the great salvation?” Put these questions and you will soon convict yourself much more readily as being a sinner. I have heard of a hypocritical old monk who used to whine out, while he whipped his back as softly as he could, “Lord, I am a great sinner, as big a sinner as Judas;” and when someone said, “Yes that you are—you are like Judas, a vile old hypocrite,” then he would say, “No I am not.” Then he would go on again, “I am a great sinner.” Some one would say, “You are a great sinner, you broke the first commandment;” and then he would say, “No I have not.” Then when he would go on and say, “I am a great sinner,” some one would say, “Yes, you have broken the second commandment,” and he would say, “No I have not;” and the same with the third and the fourth, and so on right through. So it came to pass he had kept the whole ten according to his own account, and yet he went on crying he was a great sinner. The man was a hypocrite, for if he had not broken the commandments, how could he be a sinner at all? You will find it better not to dwell on your sins as a whole, but to pen them, count them over, and look at them individually, one by one.

Stress levels keep rising. At work, at school, even at home, the pressure is on. Productivity targets climb. Housing bubbles burst. Viruses run out of control. Who can calm down? Who can relax?

Well, maybe I can take a cue from Psalm 131 and not concern myself with things above my pay grade. Maybe I can imagine myself as a toddler snuggling against my mother’s warmth, the gentle rhythm of her breathing soothing me. Ahhh. Can I just stay here?

When Jesus was a toddler, he and his family were refugees in Egypt. What a lot they had experienced! Visits by smelly shepherds and stargazing foreigners. A close escape from Herod’s hit squad. And then months turning into years while they lived as strangers in a strange land.

Yet we can imagine Mary picking up Jesus and wrapping him in her arms. And we can imagine Jesus finding comfort from her warmth and her steady breathing. Out of place in Egypt, threatened back home—none of that was a concern for little Jesus, who rested quietly in his mother’s embrace.

The psalm and Jesus himself invite us to snuggle against the warmth of God’s presence, to rest in God’s embrace, to trust God when the pressure is on, to trust God like Jesus trusted his mother’s arms.

It can be hard to calm down, Jesus. Too much is too scary and too far beyond me. With hope in God, help me to share a quiet rest with you. Amen.

Those who are in the realm of the flesh cannot please God.
Romans 8:8
DailyVerses.net