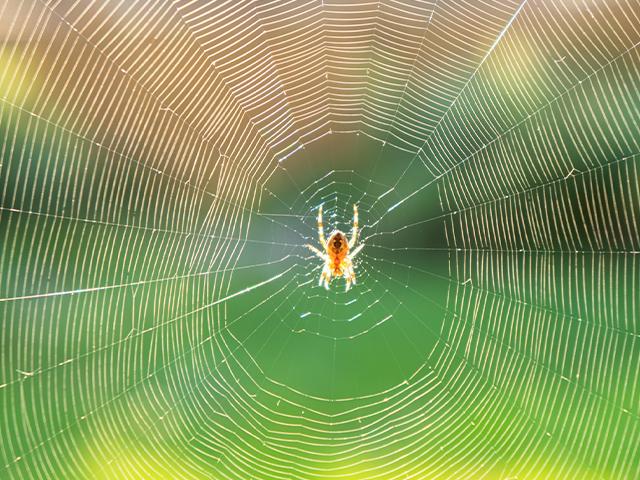 He knew what he was doing. That sneaky spider.

I pulled back the curtains early one morning and looked out the window at the flower garden as I always do. I gasped as I leaned forward to get a better look. Overnight, a mid-sized spider had spun a web in my beloved butterfly bush. Any unsuspecting butterfly or moth drawn to the flowers, would become his breakfast. Clever, very clever.

Then I noticed his prize. He had caught himself a lightning bug, which looked to still be alive. I ran to the closet to get my shoes, rushed out of the garage with a broom, and hurried to the bush. A quick swipe of the broom freed the bush of the web, and a firm “splat” of my shoe freed the world of the spider.

Clever—that’s what Satan is. Our spiritual enemy likes to weave his own trap in the weekly workings of God’s family. In the church, we find joy and satisfaction in building relationships with other believers in Christ. We are drawn to the fellowship and often to the opportunity to serve others. But Satan doesn’t want us to get along. He can build a web of conflict that’s waiting for us to walk—or fly—into it. Unrest, division, grudges—these temptations lie in wait.

The apostle Paul urged the Philippian church to help two women reconcile. Had they been caught in a “clever” trap? Paul’s solution involved unifying their thinking and their focus.

“I implore Euodia and I implore Syntyche to be of the same mind in the Lord. And I urge you also, true companion, help these women who labored with me in the gospel.” (Philippians 4:2-3 NKJV*)

Jesus is our common ground. To be of the same mind in the Lord means that we adhere to Jesus’ way of thinking and to His purposes. We think like Him, and we focus on what He sets as a priority for His family—loving God and each other (Mark 12:30-31), knowing God (John 17:3), sharing the gospel (Matthew 28:18-20), and holding fast to sound words … in faith and love which are in Christ Jesus (2 Timothy 1:13).

When we’ve walked into a trap of conflict, we can free ourselves by seeking the Lord’s wisdom and by remembering His purposes for us. We can lay aside issues that don’t fit into that purpose and focus on what does. What would Jesus think about the current situation, and how would He handle it? With God’s truth, love, and gentleness.

Paul goes on to talk about the heart attitude we can have as we live among those who are in God’s family and outside of it. Let your gentleness be known to all men. The Lord is at hand (Philippians 4:5). Gentleness helps us to refuse a trap of conflict. Or to react to conflict with Jesus’ strength and forbearance.

Just as Jesus graciously forgave those who mistreated Him, we can depend on His help to put on tender mercies, kindness, humility, meekness, longsuffering (Colossians 3:12) and love, which is the bond of perfection (Colossians 3:13). We can seek peace instead of anxiety and unrest. We can each seek the Lord’s way to handle something, so we guard our unity in Christ.

Let’s keep our eyes open for our spiritual enemy’s traps of conflict and handle them with the Lord’s wisdom and love. A firm swipe of the broom may be needed. But hopefully directed at the trap and not a fellow lightning bug.

*All Scripture verses are taken from the NKJV.

Psalms 40:6-8 6Sacrifice and offering you did not desire, but my ears you have pierced burnt offerings and sin offerings you did not require. 7Then I said, “Here I am, I have come– it is written about me in the scroll. 8I desire to do your will, O my God; your law is within my heart.”

The author of Hebrews quotes this passage and tells us it is about Jesus. He was reading the Septuagint, the Greek translation of the original Hebrew. There is a variation there, possibly a mistranslation in that Greek version. Instead of “but my ears you have pierced” it reads, “but a body you prepared for me” (Hebrews 10:5). Could it be a mistake? I believe every passage is inspired by God and that both expressions are true. The Son of God was given a human body through the womb of Mary. His ears were opened to God. In the tradition of a servant who chose to continue as a slave after his term of service was up, Jesus was a bondservant to the Father. The sign of the bondservant was the pierced ear (Exodus 21:6). Both versions are applicable to Jesus.

The sacrifices the Jews made at the altar every morning and evening were merely a shadow of The Lamb to come (John 1:29). They were never what God desired for a covering of sin. Then the Son said to the Father, “Here I am, I have come.” The Lamb of God came into the world to be the sacrifice God desired to take away the sins of the world. It was prophesied throughout the Old Testament. Jesus said He had come to do the will of God. That is the expression of a bondservant. He came to do the will of the Father in shedding His blood for our sins. The Law of God was in His heart. He knew His objective because the Law outlined it clearly, “Without the shedding of blood there is no remission of sin.” God told the people of Israel He wanted to make them a nation of priests. There was only one way to do it. Jesus knew that He had to crush the head of the serpent but that in the process his heel would be wounded (Genesis 3:15). Thank God! The Son desired to do the will of the Father for our salvation.

Consider: You had a body prepared for you also. Is your ear open to God? Is it opened, the sign of a bondservant? Do you delight to do His will? Is His Law in your heart?

The Failure of History

For while we were still weak, at the right time Christ died for the ungodly. (Romans 5:6)

To their credit, my two little girls sat patiently as the Cherokee peace chief explained his slit ears, metal breastplate, and high-heeled shoes. On the table in front of him sat a rifle, swan feathers, a clay mug, and other shards of the past. This is exactly what I love to do on a Saturday morning.

You see, I love the way history feels because I’m something of a nostalgia junky. The narratives that draw together people, locations, and wars latch onto me. The connections that run through mountains, rivers, and small towns dig under my skin. The history of grace absorbs me.

I have to be careful, though. Otherwise, I’d spend too much time living back there and not paying attention to grace here and now.

There’s something in history that we often overlook. Sure, learning about the past supposedly keeps people from repeating mistakes (though I’ve yet to see that be the case). And we need to see where we’ve come from, to understand the ebbs and cycles in the story of civilization. But it’s more than that.

History—much more than just a learning tool—is the story of human failure. If that sounds morbid, it is. The big picture of our history is how humans have failed to love, failed to live up to God’s standards. There are tiny currents that push back against the raging waters of failure (and those are some great stories to focus on), but the overall direction has been clear.

What we learn, if we care to glance back, is that humanity has no chance—that is, no chance apart from grace. Our history lays bare the need for a raw, relentless love. We’ve stumbled and scrambled, fought and exiled. And yet no amount of human effort has ever satisfied the searching, the wanderlust. We’ve pushed on, pressed on, killed on. And never reached our goal.

I love history because God’s there in the midst of our failures. He never lets go; He never disappears.

Intersecting Faith & Life: One reason I always challenge others to keep a journal or a blog is because it gives us all a place to record our own histories. It’s a place where we can see the pursuing love of God as He picks us up from our failures and loves us anyway. It’s a place to learn from past mistakes. Take a moment today to capture your own story and keep at it. You’ll always be amazed at the grace that shimmers through.

“This is a trustworthy saying, and everyone should accept it: ‘Christ Jesus came into the world to save sinners’ – and I am the worst of them all.” – 1 Timothy 1:15 NLT

It seemed Jerry McAuley was a lost cause. Born in Ireland in 1839, he was a troublemaker even as a boy. He was raised by his grandmother who sent him to live with relatives in New York, hoping for positive change. But Jerry ran away, making his living as a thief.

When still a teenager, he was sentenced to prison for robbery. The authorities reportedly were glad just to get him off the streets. In prison, he was impressed by a friend who became a Christian. He realized that, through Christ, he could become a new person.

He began praying and reading the Bible. Then one night he felt God’s presence and assurance that He could forgive his sins. It was the beginning of a new life. Eventually pardoned and released, he burned with a passion to share his testimony and help others.

In 1872, he opened the Water Street Mission in New York City as an outreach for those considered without hope. It was the first mission of its kind in the US. Through this outreach, hundreds gave their lives to Christ.

Today, millions have been given up as hopeless. But McAuley’s story reminds us God can do what seems impossible, even change men like Jerry and Paul, who called himself the “worst” sinner.

Do you know anyone who seems without hope? Pray for them. Believe in God for miracles. Remember, with Him all things are possible.

Jesus is the stone you builders rejected, which has become the cornerstone.
Acts 4:11
DailyVerses.net