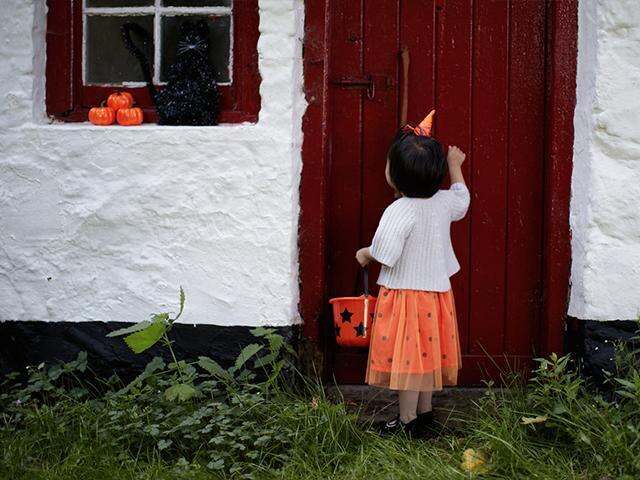 I remember it like it was yesterday. Samuel, my seven-year-old son pranced around ready to put on his Halloween costume.

Pizza, the fast and easy meal had become the Halloween tradition for my son and me.

As soon as we ate, Samuel raced to his bedroom, put on his scary costume and grabbed his bag.

“Honey, you understand you can only go in our circle of condos where I can see you.”

“I will, Mom. I promise.” And with that, he swooshed out the door.

Samuel stayed within the boundaries. While I wanted to keep an eye on him, I also wanted to give candy to any little treat-seekers who ventured our way.

When Samuel returned, the look on his face clawed into my heart.

He threw his empty trick-or-treat bag on the sofa.

“Nobody came to the door.”

That was one of those “Mommy Moments” I didn’t know how to handle. My heart cried.

Why didn’t anyone come to the door?

We were new to that city, so I wasn’t comfortable driving him around to strangers’ houses. We did the next best thing I could think of. We hung out together and watched a movie.

There was a lot of emphasis about Halloween beginning as a pagan holiday. Sometimes, Christians were urged not to participate.

I kept asking: So, God, What Should We Do about Halloween?

Brian and I lived in a neighborhood where we expected a lot of little children. What should we do?

We finally figured it out. We turned off the lights and hid out from those little pumpkins. We could hear the muffled voices of the children and their parents talking and laughing as they traipsed down our street in search of treats.

Brian and I remained silent. Our house remained dark.

Was Hiding in the Dark on Halloween Night the Right Solution?

It bothered both of us.

I could still feel the disappointment in my son when no one opened the door for him so many years ago. Now, I don’t want to be the one who disappoints other little children.

Besides that, the Bible tells us …

Clearly, we had not influenced anyone hiding in the dark.

Again, Brian and I prayed about how to handle Halloween.

“God, how do you want us to handle this holiday? I believed Halloween was like a children’s holiday where parents and children in the neighborhood had fun together. But now, is our participation condoning something evil? I don’t think so.  God, please guide us.”

God Gave Us a Halloween Plan!

We went to the stores and bought little goodie bags and lots of candy. Then we purchased little Christian brochures to put into the bags. We picked out the best ones we could find for little children.

In advance, Brian and I packed our candy and brochures. We decorated our door with a fall wreath and placed a straw doll and talking pumpkin close to our basket of goodies. We flipped on the lights. We were ready to welcome Halloween!

Since we began our Halloween ministry, we’ve lived in several different states. In the past eight years, we’ve had approximately 750 children come to our door and receive their treat bag. There is no other holiday where Brian and I give out so many tracts about Jesus.

These brochures have the potential to be little seeds for Jesus-maybe hundreds of them as they add up year after year.

”Keep on sowing your seed, for you never know which will grow — perhaps it all will.” Ecclesiastes 11:6 (TLB)

Now It’s Your Turn. How Will You Handle Halloween?

Cast Your Bread upon the Waters
Ecclesiastes 11:1-6

11 Cast your bread upon the waters,
for you will find it after many days.
2 Give a portion to seven, or even to eight,
for you know not what disaster may happen on earth.
3 If the clouds are full of rain,
they empty themselves on the earth,
and if a tree falls to the south or to the north,
in the place where the tree falls, there it will lie.
4 He who observes the wind will not sow,
and he who regards the clouds will not reap.

6 In the morning sow your seed, and at evening withhold not your hand, for you do not know which will prosper, this or that, or whether both alike will be good.

Now Moses kept the flock of Jethro his father-in-law, the priest of Midian: and he led the flock to the backside, of the desert, and came to the mountain of God, even to Horeb. And the angel of the Lord appeared unto him in a flame of fire out of the midst of a bush” (Exod. 3:1,2).

The vision came in the midst of common toil, and that is where the Lord delights to give His revelations. He seeks a man who is on the ordinary road, and the Divine fire leaps out at his feet. The mystic ladder can rise from the market place to Heaven. It can connect the realm of drudgery with the realms of grace.

My Father God, help me to expect Thee on the ordinary road. I do not ask for sensational happenings. Commune with me through ordinary work and duty. Be my Companion when I take the common journey. Let the humble life be transfigured by Thy presence.

Some Christians think they must be always up to mounts of extraordinary joy and revelation; this is not after God’s method. Those spiritual visits to high places, and that wonderful intercourse with the unseen world, are not in the promises; the daily life of communion is. And it is enough. We shall have the exceptional revelation if it be right for us.

There were but three disciples allowed to see the transfiguration, and those three entered the gloom of Gethsemane. No one can stay on the mount of privilege. There are duties in the valley. Christ found His life-work, not in the glory, but in the valley and was there truly and fully the Messiah.

The value of the vision and glory is but their gift of fitness for work and endurance.
–Selected

The High Priest standing between the dead and the living

“And Aaron took as Moses commanded, and ran into the midst of the congregation; and behold, the plague was begun among the people: and he put on incense, and made an atonement for the people. And he stood between the dead and the living; and the plague was stayed.” Numbers 16:47, 48

Jesus, the propitiator, is to be looked upon as the ordained one—called of God as was Aaron. Settled in eternity as being the predestined propitiation for sin, he came into the world as an ordained priest of God; receiving his ordination not from man, neither by man; but like Melchisedec, the priest of the most high God, without father, without mother, without descent, having neither beginning of days nor end of life, he is a priest for ever after the order of Melchisedec. Stand back, sons of Korah, all of you who call yourselves priests. I can scarce imagine that any man in this world who takes to himself the title of a priest, unless he takes it in the sense in which all God’s people are priests,—I cannot imagine that a priest can enter heaven. I would not say a thing too stern or too severe; but I do most thoroughly believe that an assumption of the office of priest is so base an assumption of the priestly office of Christ, that I could as well conceive of a man being saved who called himself God, as conceive of a man being saved who called himself a priest; if he really means what he says, he has so trampled upon the priestly prerogative of Christ, that it seems to me he has touched the very crown jewels, and is guilty of a blasphemy, which, unless it be repented of, shall surely bring damnation on his head. Shake your garments, you ministers of Christ, from all priestly assumption; come out from among them; touch not the unclean thing. There are no priests now specially to minister among men. Jesus Christ and he only is the priest of his Church. He has made all of us priests and kings unto our God.

“Behold, the head of Ish-bosheth the son of Saul, your enemy, who sought your life; so the LORD has given my lord the king vengeance this day on Saul and his descendants.” – 2 Samuel 4:8 NASB

Recab and Baanah were raiders who were valuable warriors for King Saul. After Saul died, these men tried to win David’s favor by assassinating Ish-bosheth, Saul’s son. They thought this would clear the way for David to be king. They fully expected David to be pleased and to reward them.

But to David, Ish-bosheth was not a rival, but “a righteous man” and God’s anointed. David had these “wicked men” executed for their crime (v. 11). He didn’t live by their rules.

These raiders show the extent to which some people go to get ahead. In the world around us, we see people willing to do just about anything to get results. They will lie or cheat. Deceive, distort, and spread rumors. In every situation, we need to remember, “Man looks at the outward appearance, but the Lord looks at the heart” (1 Samuel 16:7).

The world may encourage you to believe that the end justifies the means, and you can do anything to accomplish your goals. But remember that God is watching you. He has higher standards. He has given you His Word. And He promises to reward you if you obey Him, please Him, serve Him.

Make sure that you first seek His Kingdom. Obey His Word and live by His principles. Pray for others in the body of Christ. Don’t think of them as rivals but as brothers and sisters in the Lord.

For every house is built by someone, but God is the builder of everything.
Hebrews 3:4
DailyVerses.net