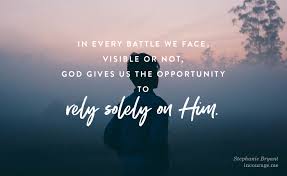 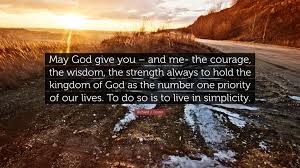 Take Heart and Wait for the Lord 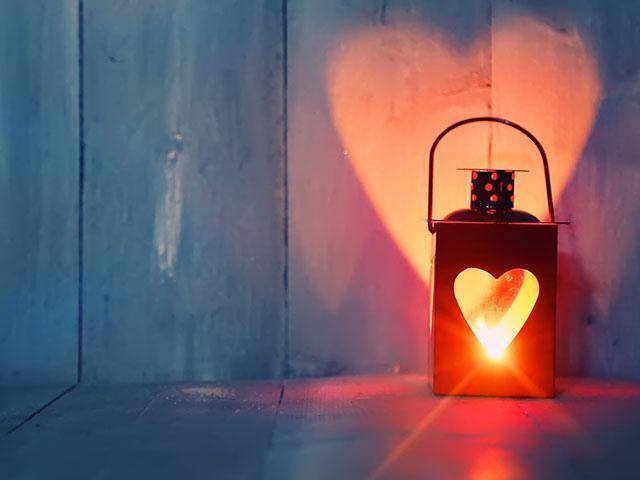 All at once an angel touched him and said, “Get up and eat.” He looked around, and there by his head was some bread baked over hot coals, and a jar of water. He ate and drank and then lay down again.

The angel of the Lord came back a second time and touched him and said, “Get up and eat, for the journey is too much for you.” So he got up and ate and drank. Strengthened by that food, he traveled forty days and forty nights until he reached Horeb, the mountain of God. 1 Kings 19: 5-8 (NIV)

God can save us in our darkest hour. Even when we have given up on ourselves, He has not given up on us. He will continue to provide for you and cherish you because you are His child. For example, I was in a dark place without housing for several months. My family of five lived in one motel room, with the bathroom being my office. I considered that time to be my lowest moment, but God provided. He gave me a promotion; He gave my husband a raise. He told me He would open a housing opportunity in March, and I stood fast to His word, not knowing what God would do or how He was going to do it.

From my standpoint, everything looked bleak, but from God’s view, everything was moving in the right direction. I just had to rest until He gave me instructions on what to do next. Now I was not running for my life like Elijah was, but I had to trust in God’s provision for every area of my life. In Him, I found peace; I stood still and knew that He was God. Did I have my moments? Of course, I did. I had moments where I thought we would never be delivered. But God saw to it that we were. My sister was standing in faith with me. She found a place online that was renting and was open on the weekend. I got the application and filled it out. They told me it was first come, first served, so I made sure to get the application submitted on time. They called me the next day and told me I was approved.

No housing complex had approved me for the two years, but I was approved in God’s timing. They told me my move-in date would be in March—months away, but I knew it was God because He told me we would be delivered in March. I’m still in awe of how He transitioned us to this place, a newly renovated apartment. I give Him all the glory and praise for all He has done. So I encourage you today. Stand firm in faith and know that He has heard your cry. He may tarry, but He has not forgotten you or your circumstance.

‘Blessed and holy is he that hath part in the first resurrection; on such the second death hath no power, but they shall be priests of God and of Christ, and shall reign with him a thousand years.’ Revelation 20:6

Damnation, the second death, shall have no power on those who rise at the first resurrection. How can damnation fall on any but those who are sinners and are guilty of sin? But the saints are not guilty of sin. They have sinned like others, and they were by nature the children of wrath even as others. Their sin has been lifted from them: it was laid upon the scapegoat’s head of old. He, the eternal substitute, even our Lord Jesus, carried all their guilt and their iniquity into the wilderness of forgetfulness, where it shall never be found against them for ever. They wear the Saviour’s righteousness, even as they have been washed in his blood; and what wrath can lie on the man who is not only guiltless through the blood, but is meritorious through imputed righteousness? O arm of justice, you are nerveless to smite the blood-washed! O flames of hell, how could even so much as the breath of your heat pass upon the man who is safe covered in the Saviour’s wounds? How is it possible for you, O deaths, destructions, horrors, glooms, plagues, and terrors, so much as to flit like a cloud over the serene sky of the spirit which has found peace with God through the blood of Christ? No, brethren, ‘Bold shall I stand in that great day …’ There shall be a second death; but over us it shall have no power. Do you understand the beauty of the picture? As if we might walk through the flames of hell and they should have no power to devour us any more than when the holy children paced with ease over the hot coals of Nebuchadnezzar’s seven times heated furnace.

Judges 7:20 20The three companies blew the trumpets and smashed the jars. Grasping the torches in their left hands and holding in their right hands the trumpets they were to blow, they shouted, “A sword for the LORD and for Gideon!”

What a fascinating plan the LORD gave them. Each of the 300 men took a pitcher with a torch inside in one hand. In the other was a trumpet. On cue they smashed the pitchers and the light shown out. With the other hand they blew their trumpets and then shouted, “A sword for the LORD and for Gideon!”

The enemy was thrown into a panic thinking that each light led a company of soldiers. Frightened in the dark, they killed one another. The dream Gideon had overheard came to pass. What sword were they shouting about? It was the Word of the LORD that they were faithfully obeying.

We have a treasure in jars of clay. It is the Light of the world. At times we seem to be totally outnumbered. But we keep on obeying the Word and believing. We become broken vessels and the light shines out. We blow the trumpet of the Gospel and the enemy (spiritual powers of darkness) is thrown into confusion. In the darkness the enemy does not know who is a friend and who is a foe. He ends up defeating himself. It is not as if we do any great thing. God gets all the glory. We are outnumbered and outgunned, but we just obey and watch God work. If God was faithful to Gideon, to give Him the plan, and encourage Him that He would bring it to pass, will He be any different with you?

Trust God to bring the victory as you obey Him.