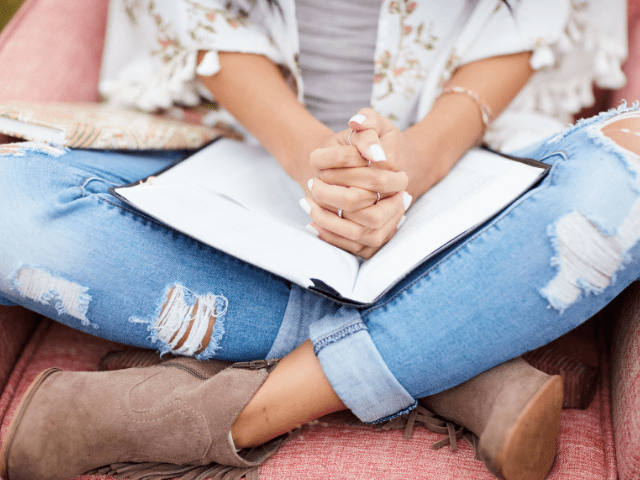 Have you ever been so thirsty that you could hardly bear it? The kind of thirst where your throat feels dried up, you can hardly swallow, and your tongue sticks to the roof of your mouth that you’re just so desperate for a drink? When I did long-distance running in school, I remember being so thirsty after a long cross-country race that I felt like I couldn’t get enough water.

Just as we get physically thirsty, the Bible tells us that we get spiritually thirsty. I’m reminded of the story of the woman at the well. This Samaritan woman had lived a hard life; in and out of relationships, she was an outcast in her own town. She was thirsty, but she didn’t necessarily know it. This was just another ordinary day for her until she encountered Jesus. Here she was getting water at the local well in the heat of the day. She was alone because no one gathered water at that time of day. All the other women would have come early in the morning, but she was not accepted in that group. She’d been with too many men. Maybe she was known as a “home-wrecker,” but Jesus didn’t see her that way. Although He was a Jew, He had no problem conversing with her and telling her what she was really longing for:

Like the Samaritan woman, everyone has a thirst for meaning, true love, and purpose. God created us with this thirst. And like her, we must learn that nothing will satisfy it except the One for whom the thirst was made. Relationships? Success in business or family? The accumulation of stuff? Even when you get that raise or that new car, all these things fall short of what truly satisfies. We discover that what we really long for is not anything material in this world, not even a feeling or experience.

Jesus tells her and us that we don’t have to search the whole world or our whole lifetime to find what satisfies us. In fact, He says the water He gives will never leave us thirsty again. Notice that His water never runs out because the water He offers has a name.

Your deepest desire has a name: Jesus, the One we were meant to thirst for. The Spirit of Christ comes and lives in us, and He is the source of this living water that keeps on giving and giving.

Then Jesus declared, “I am the bread of life. Whoever comes to me will never go hungry, and whoever believes in me will never be thirsty.” (John 6:35)

As we run this race of life, we can be sure that our thirst will be met in Jesus. He promises us that He will give us abundant life! And He is so generous! Are you thirsty and longing for more? Your deepest desire has a name. It’s Jesus. Welcome Him into your life today, and never be thirsty again!

Dear Jesus, I confess I’m thirsty. Only You will truly satisfy my deepest desires. I welcome You into every part of my heart today. Amen.

1 Samuel 13:11-12 11“What have you done?” asked Samuel. Saul replied, “When I saw that the men were scattering, and that you did not come at the set time, and that the Philistines were assembling at Micmash, 12I thought, ‘Now the Philistines will come down against me at Gilgal, and I have not sought the Lord’s favor.’ So I felt compelled to offer the burnt offering.”

The Philistines were gathering to fight Israel. Their numbers and technology were vastly superior. Samuel had told Saul to wait seven days, and he would come to offer sacrifices before the battle. Saul could see the enemy gathering and the Israelites deserting. He thought he needed to rally the people. The time Samuel promised to come was about up. Saul leaned to his own understanding instead of obeying in faith.

Samuel arrived immediately after the sacrifice was offered and asked, “What is going on?” Saul justified his actions. He sounded very religious. “I had to seek God’s favor before the battle. I felt compelled.” But that was not what he was told to do by God’s prophet. Compelled by whom? By his own fears, reason, and doubt. He took matters into his own hands. This began his pattern of rebellion.

Today we would probably be referring to Jesus as the son of Saul instead of the Son of David, if Saul had remained obedient to God (though of course Jesus had to come through the line of Judah). We have choices of faith throughout our life that have far ranging consequences. Do we trust God even when our eyes see great trouble? Will we take matters into our own hands, because we think God will not or cannot help? Or will we walk in faith and be blessed?

Consider: Do I respond to circumstances or to the Word of God?

Streams in the Desert – May 14

Instant obedience is the only kind of obedience there is; delayed obedience is disobedience. Every time God calls us to any duty, He is offering to make a covenant with us; doing the duty is our part, and He will do His part in special blessing.

The only way we can obey is to obey “in the selfsame day,” as Abraham did. To be sure, we often postpone a duty and then later on do it as fully as we can. It is better to do this than not to do it at all. But it is then, at the best, only a crippled, disfigured, half-way sort of duty-doing; and a postponed duty never can bring the full blessing that God intended, and that it would have brought if done at the earliest possible moment.

It is a pity to rob ourselves, along with robbing God and others, by procrastination. “In the selfsame day” is the Genesis way of saying, “Do it now.”
–Messages for the Morning Watch

“Ours not to make reply,
Ours not to reason why,
Ours but to do and die.”

Obedience is the fruit of faith; patience, the bloom on the fruit.
–Christina Rossetti

Contentment doesn’t depend on what we have or what we lack; it is found in Jesus alone.

Contentment is a quality seen in very few people today. Our society is always offering new items, gadgets, upgrades, and conveniences that promise pleasure, comfort, and satisfaction. But no material goods ever live up to that promise long-term. Yet many people keep falling for lies instead of being content with what they have.

The book of Hebrews was written to people who were experiencing discouragement and persecution for their faith in Christ. Those believers faced many hardships, including public reproach, imprisonment, and property seizure (Hebrews 10:32-34). Yet in Hebrews 10:35-36, the writer urges them to endure because they have a better and eternal possession awaiting them in heaven. They may not have had tangible wealth or comforts, but in the Lord, they had all they needed—and He promised never to leave or forsake them, no matter what men did to them on earth.

Most of us today have much more material wealth and security than those early believers did, but contentment is largely still elusive. That’s because the problem has to do with the heart. We love money and all that it provides. So while the Lord “richly supplies us with all things to enjoy” (1 Timothy 6:17), true enjoyment is possible only when our heart is set on Him rather than on worldly things. He alone is our hope.

How great you are, Sovereign Lord! There is no one like you, and there is no God but you, as we have heard with our own ears.
2 Samuel 7:22
DailyVerses.net