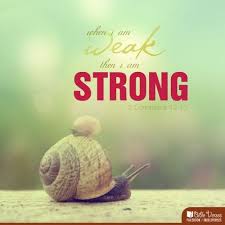 I Am Weak and God Knows 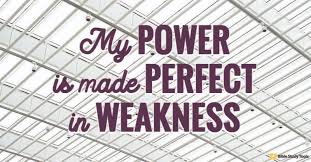 A few weeks ago, I talked with a friend about the Women’s Day demonstrations in Mexico. Without a doubt, they are a series of controversial and often very violent events in my country. Unfortunately, it becomes more of a show of forces instead of a request for recognition of rights, which should be noted, that God granted many centuries ago.

The world has made us believe that being weak is bad, and even more so, being a woman and being weak can seem worse. That is why, lately, we have seen so many social movements that want to “empower” women, losing sight of God´s original plan that is different, in a good way. In the eyes of God, women are just as valuable, created with a special purpose because that is His plan. Galatians 3:28 says,

“…There is neither Jew nor Gentile, neither slave nor free, nor is there male and female, for you are all one in Christ Jesus.”

So, thinking that I am weaker (physically) is not something that affects me; instead, I try every day to remember that God has endowed me with the ability to say no to what is wrong and say yes to what is right. Therefore, I live my life consciously for His glory.  Satan is the master of manipulation, and he knows that if he succeeds in diverting my thoughts, in time, he will succeed in diverting my life. So, with determination, I submit my mind to that of Christ so that all my thoughts have His touch. I often do an exercise of sincerity before God and ask him to examine me and show me what I must do and I would like to share it with you.

Put the Word of God into practice. In the long run, your entire life will be strengthened in God and you will not depend on your own strength. Everything we have and everything we are comes from Him, so let us take hold of Him who created the heavens and the earth, to fulfill with determination everything He has commanded us.

For me, I realize that everything I live for is God, by God, and for God. He created me, and I surround myself with more people with the same mission: to spread the Glory of God on this earth and that is why I serve so gratefully at CBN. From a telephone, we can do missions, we can also be the hands of God with every help that we deliver, and we are the voice of God in every word of encouragement that our partners share. What a privilege to be considered for the perfect work of God and yet be weak.

I gladly accept that I am weak, that I am not in control of anything, and I pray God would allow me to see Him work. So, let us strengthen ourselves in the great power of God, because the Lord will accompany us wherever we go. In his Word, Jesus promises:

“All who have come before me are thieves and robbers, but the sheep have not listened to them. I am the gate; whoever enters through me will be saved. They will come in and go out and find pasture” (John 10:8-9).

His power is evident in my weakness, so anyone of us can gladly say now: I am weak, and God knows it!

1 Samuel 30:22-24 22But all the evil men and troublemakers among David’s followers said, “Because they did not go out with us, we will not share with them the plunder we recovered. However, each man may take his wife and children and go.” 23David replied, “No, my brothers, you must not do that with what the LORD has given us. He has protected us and handed over to us the forces that came against us. 24Who will listen to what you say? The share of the man who stayed with the supplies is to be the same as that of him who went down to the battle. All will share alike.”

David and his men returned from a predicament of marching with the Philistines against Judah. The commanders of the Philistines feared David would turn on them so they sent them back before the battle began. Delivered from that situation, they came home to find their city burned and their families taken captive. David didn’t act without consulting the LORD. The LORD sent him against the Amalekites that had burned their city. It is interesting that Saul lost the kingdom over sparing the Amalekite king, while David is about to come into power after a battle with them.

They had marched so long that one-third of David’s men could not go on. Two-thirds marched on and fought for 24 straight hours, recapturing everything and taking a huge amount of spoil. On returning to the others, some did not want to share the spoils of war. David had the right perspective. He insisted the victory was from God and so all had a right to the spoils. Those who stayed behind and took care of their home are as deserving as those who went into battle.

Some people think that missionaries and pastors will have all the heavenly rewards. They would not be where they are without the prayer and financial support of those who stay behind. The spoils will be shared by all. Even the angels in heaven rejoice over every soul that comes into the Kingdom.

Consider: We are in this together regardless of our part. Am I doing my part?

The Affliction of Paul

People’s problems may be different, but God’s response is the same: His strength is enough.

It’s easy to assume that problems in biblical days were nothing like ours. So, what can a first-century missionary possibly teach us about the adversity we face in the year 2022?

Though Paul’s culture was quite different from ours, some things were the same—like temptation, hardship, and sin. Satan was a threat then as he is today. Therefore, when the apostle wrote of being burdened beyond his strength, he had experience to back up his words.

Though Paul may have “despaired even of life” (2 Cor. 1:8), he believed God would sustain him during difficult seasons. As Jesus taught, divine strength can overcome worldly tribulations (John 16:33). That isn’t to say believers can avoid all sorrow and pain, but we know the Lord will meet our needs in every heartache and trial (Philippians 4:19). Our faith grows stronger when we trust Him in times of affliction.

God’s strength is available to all believers who confess their weakness and inadequacy. Sometimes a troubled soul has only enough stamina left to admit, “Father, I absolutely cannot. If You don’t, it is simply not going to happen.” And that’s okay because in this mindset, we surrender ourselves to God. And as we wait, we’re in a good position to watch Him keep His promise.

The Communion of Saints

In Christ we, though many, form one body, and each member belongs to all the others.

Many years ago I heard someone say, “I believe in the communication of the saints.” While good communication is essential in all kinds of relationships, our connectedness in Christ goes beyond communicating well with each another.

When we say, with the Apostles’ Creed, “I believe in . . . the communion of saints,” we are saying that through Jesus’ blood we not only belong to him but also to each other. Our blood relationship in Jesus transcends even the real blood we share with our own family members.

And our communion with each other is more than just a statement of fact. Paul goes on to explain that belonging to one another has a crucial function. Each of us has been given gifts by the Holy Spirit. Though our gifts vary, the purpose for them is the same: to build one another up in service to the Lord and for the benefit of all. Using our gifts leads to all kinds of ways in which we can show God’s love to one another and to all the people around us.

The gifts we have may include preaching (prophesying—bringing God’s Word to people), teaching, leading, serving, giving, or a number of other abilities. Jesus wants us to use these gifts with thanksgiving and love to strengthen his body so that all can join in the communion of saints.

Lord Jesus, just as we belong to you, we belong to each other. Help us to use our gifts faithfully to build up your body and share your love with everyone. Amen.