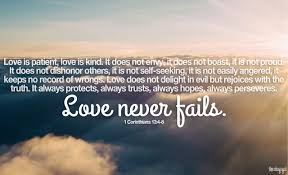 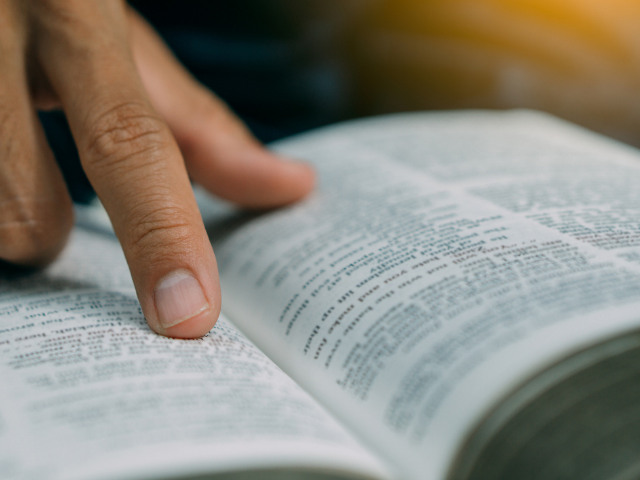 “Love is patient, love is kind. It does not envy, it does not boast, it is not proud. It does not dishonour others, it is not self-seeking, it is not easily angered, it keeps no record of wrongs. Love does not delight in evil but rejoices with the truth. It always protects, always trusts, always hopes, always perseveres. Love never fails” (1 Corinthians 13:4-8).

This is a famous passage of scripture that many of us will be familiar with. It is often heard at weddings and makes the congregation go ‘awwwww’. Nice and romantic isn’t it!

The thing is, this passage is so much more than just a romantic notion. This is challenging, gritty and is at the core of who God calls us to be as Christians. Indeed, we are all striving to become a reflection of Jesus, that perfect embodiment of love. Therefore, we need to pay attention to what the Bible says about love and build our lives on that foundation.

Jesus said that the greatest commandments are to love God and to love others (Matthew 22:37-40) and that all the 613 laws of the old testament could be summed up in those two simple statements.

So how does this apply to us? Let’s put our own names into this scripture for a moment: “Tim is patient, Tim is kind. He does not envy, he does not boast, he is not proud”. That is who God is calling you and me to be. Whilst my life may be a partial reflection, I certainly don’t live out this statement out to the full!

Indeed, when I apply these words to my life, I can see a sliding scale based on the significance of that person to me. I think with regard to my wife I do a reasonable job of being that reflection of love.  Not perfect but doing okay. Similarly, with my friends, though maybe less consistently. But, what about those I don’t know? What about the unhelpful call centre assistant who despite a 50-minute call and who put you on hold 3 times still can’t fix your broadband contract? That’s where I see myself starting to fall down.

As John’s Gospel (John 13:34-35) says, it is our love for one another that sets us apart. That is how we show people Jesus. Through audacious, exceptional love. This is not limited to just Christians, Jesus says to love everyone. The full spectrum, from those who love you to those who hate you.

This is what it really means to love. Love is not a nice feeling, that makes you warm and fuzzy inside. It’s about being willing to lay down yourself, pick up your cross and follow Jesus.

So here, we could really expand on the Apostle Pauls words (insert your own name into the blanks):

Love comes first, everything else comes thereafter. As Paul goes on say in Corinthians, if we miss out on love, we are a clanging bell and our efforts count as nothing. When we put love first, everyone will know that we are his disciples.

2 Samuel 11:13-15 13At David’s invitation, he ate and drank with him, and David made him drunk. But in the evening Uriah went out to sleep on his mat among his master’s servants; he did not go home. 14In the morning David wrote a letter to Joab and sent it with Uriah. 15In it he wrote, “Put Uriah in the front line where the fighting is fiercest. Then withdraw from him so he will be struck down and die.”

The chain of sin that began when David stayed home instead of going into battle was carried even further. David wanted to cover up his adultery by having the husband of Bathsheba sleep with her. Then he would think her child was his own. The faithful Uriah would not sleep with his wife when his fellow soldiers and the ark of God were in tents in the battlefield. David tried harder. He got him drunk, but still Uriah was faithful. Then he sent a letter with him that gave a plan for his murder by not defending him in battle. If David couldn’t cover his sin, he’d have Bathsheba’s husband killed and take her for his wife.

King David thinks only Joab will ever know. God knows! David thought the letter would remain a secret. But now the world has read the substance of his letter. When we plot a sin to cover sin and think that our cunning will keep anyone from knowing, we deceive only ourselves. Be sure your sin will find you out (Numbers 32:23b). When Bathsheba gave birth, the nation knew, and the death of Uriah would be seen as more than a coincidence. David lost respect in the eyes of his nation when his plan was to save his good name. Our sin always costs more than we planned to pay, and takes us further than we planned to go.

Admonition: Stop the cycle before it gets uglier. Repent and ask man and God for forgiveness.

Streams in the Desert – June 3

On that day, when evening came, Jesus said to his disciples, “Let’s go across to the other side of the lake.” — Mark 4:35

Though Christ may delay His coming in our time of distress, it is only that our faith may be tried and strengthened, and that our prayers may be more intense, and that our desires for deliverance may be increased, so that when the deliverance does come we will appreciate it more fully.

Christ gave them a gentle rebuke, saying, “Where is your faith?” Why did you not shout victory in the very face of the storm, and say to the raging winds and rolling waves, “You can do no harm, for Christ, the mighty Savior is on board”?

It is much easier to trust when the sun is shining than when the storm is raging.

We never know how much real faith we have until it is put to the test in some fierce storm; and that is the reason why the Savior is on board.

If you are ever to be strong in the Lord and the power of His might, your strength will be born in some storm.
–Selected

“With Christ in the vessel,
I smile at the storm.”

Christ said, “Let us go to the other side”—not to the middle of the lake to be drowned.
–Dan Crawford

How many are your works, Lord! In wisdom you made them all; the earth is full of your creatures.

Some of my friends have gotten into birding in the past few years. They keep a list of every type of bird they see. They travel to parks and other special places where they are likely to see a new species of bird to add to their list. When they tell me about it, I am amazed at the number of different species of birds that are out there to be seen. This is true across the animal kingdom: scientists say that the number of different types of creatures on the earth is in the millions.

This vast diversity is a beautiful part of God’s creation, as Psalm 104 shows. In his wisdom God made so many different animals and plants that we haven’t been able to count them all. And in his wisdom God made many different cultures and people as well. This psalm uses poetry to tell about the powerful and beautiful way God made the world. It invites us to praise God for such diverse beauty and for creating the world in the best way possible.

Each of us brings our own type of beauty to the world. Each little brown sparrow sings just a few notes. And God combines with that the huge variety of sounds and other signs of beauty in this world. In all these ways God displays his love for his creation. Let’s praise God for creating a world that is so beautiful and diverse!

Creative God, I praise you because you knew exactly what to create to make the world so beautiful. Thank you for this world that bursts with more variety than I can understand. Amen.

Blessed are the peacemakers, for they will be called children of God.
Matthew 5:9
DailyVerses.net