Knock Your Praise Out of the Park! 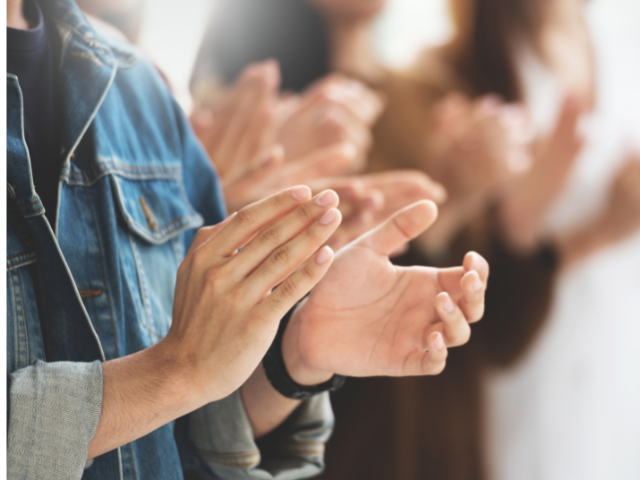 We hear a crack as the bat makes contact with the baseball. The fans in the stands erupt in cheers as the ball soars over the wall and the player rounds the bases in celebration of a home run!

I like going to baseball games and rooting for my team. It’s thrilling to share in the excitement of the game while sitting in the stands with other fans. If you’ve ever been to a sporting event, you know exactly what I mean. The crowd is ecstatic, and there is a sense of exhilaration in the air. Clapping, cheering, singing, and chanting are heard in response to every play of the game. We shout out to the athletes as they take their places on the field and we praise them for every outstanding play!

All of this reminds me of how we should approach our heavenly Father in worship and praise.

Psalm 98 (NLT) is a beautiful chapter about praising, singing and giving thanks to the Lord for everything. We are to break out and sing for joy as He announces His many victories. In a joyful symphony before the Lord God our King, we bring harps, trumpets, and sound the ram’s horn. According to verses 7 and 8, all living things, including the seas and rivers, clap and shout with praise in celebration of our Lord’s victory! My mind can clearly picture how that lovely praise party would look and feel. I’m reminded of how overjoyed I was at the baseball games when I was shouting, throwing my hands up, and cheering the players on for each victory on the field.

I need to stand back and consider whether I praise and thank God as enthusiastically as I do for my favorite team. It is essential for our spiritual walk to devote time to worshiping God, whether that be through listening to worship music, singing, praying, or simply reflecting on the victories God has brought about in our life.

Let the sea and everything in it shout his praise! Let the earth and all living things join in.

Let the rivers clap their hands in glee! Let the hills sing out their songs of joy.

Let’s pray:
Help us to remember the value of praise and thanksgiving, heavenly Father. Let us join the rivers, lakes and all of creation in bowing before You. Every day, we will lift our eyes and hearts to you and delight in You. Father God, thank You for all Your blessings, great and small. We have the victory because You won the battle.

2 Chronicles 26:4-5, 16 4He did what was right in the eyes of the LORD, just as his father Amaziah had done. 5He sought God during the days of Zechariah, who instructed him in the fear of God. As long as he sought the LORD, God gave him success… 16But after Uzziah became powerful, his pride led to his downfall. He was unfaithful to the LORD his God, and entered the temple of the LORD to burn incense on the altar of incense.

If you read yesterday’s devotion you will be wondering about verse 4. How could the author say that Amaziah did what was right in the eyes of the LORD? Perhaps the Old Testament authors knew more about grace than we give them credit for. Many of the kings did terrible acts and yet were called right in the eyes of the LORD. The only way to comprehend this is to see that the grace of God covered their sins because they had given their lives to God. This should encourage us that though we have backslidden at times, the grace of God covers all our sin. The stories of these kings are so much like the lives of Christians today. At a memorial service we hear the very same thing that the author writes here. Every person has failures and shortcomings but to what or to whom did he commit his soul?

There is a cycle of testing in the lives of most Christians that is similar to the one Uzziah experienced. When they commit themselves to obeying God and serve Him, they find their lives are blessed in many ways, including physical abundance. Here is where the testing becomes more difficult and the refinement more intense. We can go the way of Uzziah and become prideful, thinking our blessings are the result of our efforts and skills, or we can go the way of David, who humbled himself and realized that without God he was nothing. Both of these kings were credited as doing what was right in the eyes of the LORD, but one finished with a powerful testimony of repentance and restoration. The other Uzziah ended his life isolated and in shame. Much of the fruit of our actions is seen in this life, especially at the end of life. The prideful are then powerless, and those that flocked around them while they held power will abandon them. The humble, however, even though powerless, will be surrounded with the lives of those they have blessed.

Consider: Which will you be?

“Before destruction the heart of man is haughty, and before honour is humility.” Proverbs 18:12

What is humility? The best definition I have ever met with is, “to think rightly of ourselves.” Humility is to make a right estimate of one’s self. It is no humility for a man to think less of himself than he ought, though it might rather puzzle him to do that. Some persons, when they know they can do a thing, tell you they cannot; but you do not call that humility. A man is asked to take part in some meeting. “No,” he says, “I have no ability”; yet if you were to say so yourself, he would be offended at you. It is not humility for a man to stand up and depreciate himself and say he cannot do this, that, or the other, when he knows that he is lying. If God gives a man a talent, do you think the man does not know it? If a man has ten talents he has no right to be dishonest to his Maker, and to say, “Lord, thou hast only given me five.” It is not humility to underrate yourself. Humility is to think of yourself, if you can, as God thinks of you. It is to feel that if we have talents, God has given them to us, and let it be seen that, like freight in a vessel, they tend to sink us low. The more we have, the lower we ought to lie. Humility is not to say, “I have not this gift,” but it is to say, “I have the gift, and I must use it for my Master’s glory. I must never seek any honour for myself, for what have I that I have not received?”

For meditation: Pride can lead us to misuse God’s gifts for selfish ends. A false humility can lead to laziness and disobedience which causes someone else to have to do what we should be doing ourselves. The right balance is to serve the Lord with all humility as the apostle Paul could truthfully claim to have done (Acts 20:19).

Audience with the King – Streams in the Desert – August 17

I went to America some years ago with the captain of a steamer, who was a very devoted Christian. When off the coast of Newfoundland he said to me, “The last time I crossed here, five weeks ago, something happened which revolutionized the whole of my Christian life. We had George Mueller of Bristol on board. I had been on the bridge twenty-four hours and never left it. George Mueller came to me, and said, ‘Captain I have come to tell you that I must be in Quebec Saturday afternoon.’ ‘It is impossible,’ I said. ‘Very well, if your ship cannot take me, God will find some other way. I have never broken an engagement for fifty-seven years. Let us go down into the chart-room and pray.'”

“I looked at that man of God, and thought to myself, ‘What lunatic asylum can that man have come from? I never heard of such a thing as this.’ ‘Mr. Mueller,’ I said, ‘do you know how dense this fog is?’ ‘No,’ he replied, ‘my eye is not on the density of the fog, but on the living God, who controls every circumstance of my life.'”

“He knelt down and prayed one of the most simple prayers, and when he had finished I was going to pray; but he put his hand on my shoulder, and told me not to pray. ‘First, you do not believe He will answer; and second I BELIEVE HE HAS, and there is no need whatever for you to pray about it.'”

“I looked at him, and he said, ‘Captain, I have known my Lord for fifty-seven years, and there has never been a single day that I have failed to get audience with the King. Get up, Captain and open the door, and you will find the fog gone.’ I got up, and the fog was indeed gone. On Saturday afternoon, George Mueller was in Quebec for his engagement.”
–Selected

If our love were but more simple,
We should take Him at His word;
And our lives would be all sunshine,
In the sweetness of our Lord.