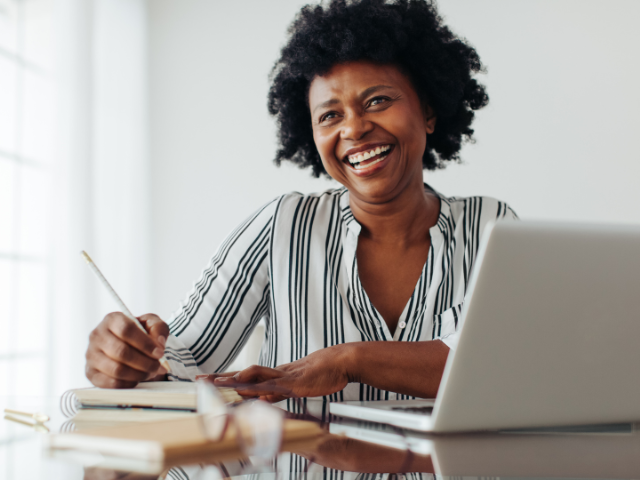 Embracing who God has made us to be unlocks a new level of freedom. I experienced this freedom in 2016 during my freshman year of college. It was the day I did a “big chop” and committed to wearing my hair in its natural, afro state.

To those who are unfamiliar with the term “big chop,” it’s used predominantly in the black community to refer to the act of cutting off one’s chemically relaxed hair in order to revert back to their natural hair texture. A relaxer (or perm) is a chemical treatment that is applied to curly hair to make it straight. In a nutshell, a big chop is a commitment to wearing one’s naturally curly hair instead of choosing to chemically straighten it. Perms can come with a few major side effects, including extreme burning and scalp irritation upon application of the perm, scabs on the scalp, and, over time, hair loss. You may be wondering, why in the world would anyone get a perm with all those adverse side effects? One word: acceptance.

As a child, the term “good hair” only represented one thing for me: straight, long hair… a European standard of beauty. Based on those qualifications, I did not make the cut. From passive remarks to outright insults of my hair and other kinkier hair textures of African descent, it was evident what was deemed acceptable and desirable for my hair was driven by society. I felt trapped. Thankfully, God’s life-giving Word provided a way out.

You are altogether beautiful, my love; there is no flaw in you. (Song of Solomon 4:7 ESV)

God’s Word outweighs every fleeting beauty standard of this world that strips image-bearers of their true worth. Numbers 23:19 is the Scripture that silenced any lingering doubts about God’s view of me:

If God cannot lie, then He cannot lie about me; if He does not change His mind, then His declaration about me is definite. The decision to wear my natural hair is an outward expression that I believe what God says I am: beautiful.

While my testimony is about falling in love with my hair, my story is not unique. Every day, fellow image-bearers of God are made to feel “less-than” due to societal standards. Whether it be weight, height, accent, skin tone, etc. the world is constantly spreading the message that what God has declared “good” (see Genesis 1:26-31) is not good enough. If you are struggling with acceptance, know that you are fully known and loved by God. There is nothing you must alter to gain His acceptance. You are God’s masterpiece.

Job 42:5-6 5My ears had heard of you but now my eyes have seen you. 6Therefore I despise myself and repent in dust and ashes.”

Job had been questioning God, but now it is God’s turn to question Job. The substance of God’s questions asks Job that if he lives in a world full of things beyond his understanding, why should he not be able to figure out what God is presently doing in his life? Such a wonderful Creator should be trusted by His creation to do what is in their best interest.

Job entered into a new relationship with God. Up until that time he had heard of God through lives and stories of others. Now he saw God with his own eyes. He had the same reaction that everyone does. He saw the holiness of God and by contrast, his wretched condition. But didn’t God say Job was righteous? No, God said there was no one on earth like him (1:8). Compared to other men he is blameless and upright. Compared to God he is a sin sick man with a sin-infested nature. Job learned genuine humility from this encounter. The manifest presence of God blows away any deception ideas of our own goodness. We need God’s manifest presence in the church today to see our real condition.

God restored everything that Job had lost, and then doubled it. There is one notable exception. He had as many children as he originally had. Why is that? Why weren’t they doubled? Besides being hard on his wife, they really were doubled. He never lost the first set of children. They merely moved to heaven before Job died. He now has twenty children, even though ten are in heaven. Things are not always as they appear. The book of Job is an exhortation to trust God no matter what you are going through.

Consider: You may never know the reasons for certain trials and struggles, but you can be sure your Creator’s character is impeccable. God will see you through, if you will continue to trust in Him.

After they were come to Mysia, they assayed to go into Bithyma: but the Spirit suffered them not (Acts 16:7).

What a strange prohibition! These men were going into Bithynia just to do Christ‘s work, and the door is shut against them by Christ’s own Spirit.

I, too, have experienced this in certain moments. I have sometimes found myself interrupted in what seemed to me a career of usefulness. Opposition came and forced me to go back, or sickness came and compelled me to retire into a desert apart.

It was hard at such times to leave my work undone when I believed that work to be the service of the Spirit. But I came to remember that the Spirit has not only a service of work, but a service of waiting. I came to see that in the Kingdom of Christ there are not only times for action, but times in which to forbear acting. I came to learn that the desert place apart is often the most useful spot in the varied life of man–more rich in harvest than the seasons in which the corn and wine abounded. I have been taught to thank the blessed Spirit that many a darling Bithynia had to be left unvisited by me.

And so, Thou Divine Spirit, would I still be led by Thee. Still there come to me disappointed prospects of usefulness. Today the door seems to open into life and work for Thee; tomorrow it closes before me just as I am about to enter. Teach me to see another door in the very inaction of the hour. Help me to find in the very prohibition thus to serve Thee, a new opening into Thy service. Inspire me with the knowledge that a man may at times be called to do his duty by doing nothing, to work by keeping still, to serve by waiting. When I remember the power of the “still small voice,” I shall not murmur that sometimes the Spirit suffers me not to go.
–George Matheson

Make Bread for Yourself

“Take wheat and barley, beans and lentils, millet and spelt; put them in a storage jar and use them to make bread for yourself.”

In some grocery stores you can find “Ezekiel 4:9 Bread,” which contains the same ingredients God told Ezekiel to use here to make bread.

But the recipe God gave Ezekiel wasn’t intended to be an expensive specialty food. Although the combination of grains forms a complete protein and would have given Ezekiel a lot of important nutrients as he ate the small portions he was told to eat, the mixture of those ingredients was not part of his cultural tradition. It pointed to a pared-back diet for times of poverty and crisis. The wheat was to be mixed with grains and legumes that made for a scant vegetarian diet and weren’t very desirable. To make matters worse, Ezekiel had to cook the bread over manure!

This strange story is unsettling: Why would God ask Ezekiel to do this? And why did Ezekiel follow through even though it was awfully uncomfortable to do so?

There are no easy answers, but it seems that the message God intended here was that there would be harsh consequences for Israel’s disobedience, and yet this unusual bread would sustain people. A coming siege would bring horrible discomfort, but it would not completely obliterate God’s people. It would be a wake-up call to turn back to God. Many years later, Jesus would sound a similar call for the people to recognize God in their midst.

Lord, your ways puzzle us sometimes, and yet we trust you to turn us back to you. Amen.