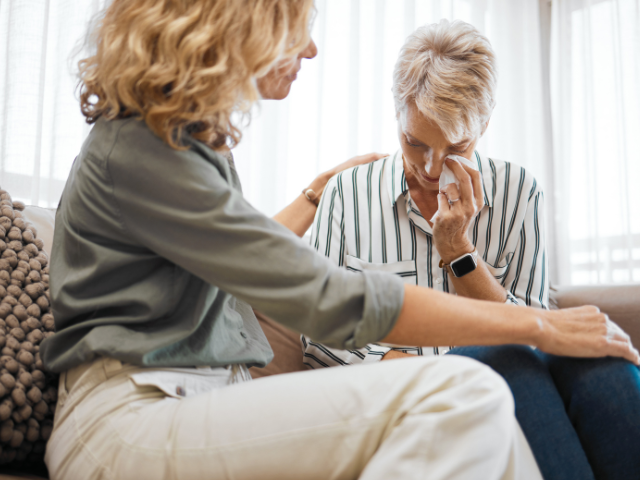 Sometimes when I’m going through something difficult, friends will tell me about how they got through a similar situation. It’s good to have that kind of support, but when I’m still in the midst of the problem, it’s hard to see my way out to the other side.

In those times, it can be helpful to hear from someone who is going through it at the same time as myself. In those situations, my friend and I have a stronger sense of empathy for each other—because neither of us knows how our situations will turn out.

I’ve been going through a season of changes this year. Some of it started with the passing of a friend. Some of it was due to changes at work. Other changes had to do with my marriage and family. But through it all, one thing has been the most comforting: friends who are in some way going through very similar situations.

Often, I didn’t even have to seek out these friends. Lately they’ve approached me with their problems, and we shared a moment of “you feel this way too?”

When this happens, we both are comforted by having a little company in the midst of our trials and the ability to metaphorically hold hands through our troubles together. Nothing provides a ray of hope quite like walking through a situation with another.

That speck of hope is what I see in Jeremiah 48-49. These verses are known for being chaotic and full of war and bloodshed as the Lord is executing judgement on Moab and Ammon. Neither chapter feels like there is much hope as God enacts judgment on the cities—but in true biblical fashion, even the darkest of chapters contain some light.

“Woe to you, Moab! The people of Chemosh are destroyed; your sons are taken into exile and your daughters into captivity. Yet I will restore the fortunes of Moab in the days to come,” declares the Lord. Here ends the judgment on Moab (NIV).

Even when judging a city that was known for its pagan ways, the Lord still had a plan to restore the people. He still gives a little glimmer of hope. And while this verse may seem like a far cry from what you’re presently going through, I have always delighted to find verses like this one, scattered through even the bleakest of passages.

And just like the comfort I feel when someone is going through a trial at the same time as I am, God is going through our trials with us. Even when He was punishing Moab, He was still with them.

And even through my own problems—those that were brought on by my own choices and actions, and those that just happened, through no fault of my own—I know that God is there with me. He is the friend who holds my hand and tells me that He understands. Even in my loneliest, most confusing moments, I am convinced that He is never far:

Be strong and courageous. Do not be afraid; do not be discouraged, for the Lord your God will be with you wherever you go (Joshua 1:9).

Prayer: Thank You, God, for being the friend who understands, the friend who walks through trials with me. I ask forgiveness for my sins and I thank You that you are a God of hope, patience, and understanding. Thank You for never leaving my side. I love You and I need You. Amen.

In the middle of the garden were the tree of life and the tree of the knowledge of good and evil.

In the beginning, as God developed his new world, he formed a garden in which he could live in loving partnership with human beings. God ­wanted humans to flourish, and he wanted creation to flourish through their care for it. In the Garden of Eden human beings lived together in harmony with the rest of creation, serving and communing with God.

There humans were free to eat from any tree they wanted—except one called the tree of the knowledge of good and evil. Maybe you know how this story goes—humans disobeyed God and ate the forbidden fruit, bringing chaos into God’s good world (Genesis 3).

In the Lord’s Supper, God is saying, essentially, “No, I am not keeping good things from you. See, just as I did long ago, I give you good things to eat, to heal you and to nourish you. By this gift from my hand, may you realize that you cannot flourish apart from my love.”

Father, thank you for your plans for us—not to harm us but to allow us to grow and flourish in your good world. For Jesus’ sake, Amen.

Streams in the Desert – November 10

Abraham’s faith seemed to be in a thorough correspondence with the power and constant faithfulness of Jehovah. In the outward circumstances in which he was placed, he had not the greatest cause to expect the fulfillment of the promise. Yet he believed the Word of the Lord, and looked forward to the time when his seed should be as the stars of heaven for multitude.

O my soul, thou hast not one single promise only, like Abraham, but a thousand promises, and many patterns of faithful believers before thee: it behooves thee, therefore, to rely with confidence upon the Word of God. And though He delayeth His help, and the evil seemeth to grow worse and worse, be not weak, but rather strong, and rejoice, since the most glorious promises of God are generally fulfilled in such a wondrous manner that He steps forth to save us at a time when there is the least appearance of it.

He commonly brings His help in our greatest extremity, that His finger may plainly appear in our deliverance. And this method He chooses that we may not trust upon anything that we see or feel, as we are always apt to do, but only upon His bare Word, which we may depend upon in every state.
–C. H. Von Bogatzky

Remember it is the very time for faith to work when sight ceases. The greater the difficulties, the easier for faith; as long as there remain certain natural prospects, faith does not get on even as easily as where natural prospects fail.
–George Mueller

Proverbs 11:24-25 24One man gives freely, yet gains even more; another withholds unduly, but comes to poverty. 25A generous man will prosper; he who refreshes others will himself be refreshed.

This is very similar to Jesus’ expression about the one who tries to save his life and ends up losing it. The one who loses his life finds it. It is the upside down world of the Kingdom of God. I once met a man who thought the Lord told him that he would one day be rich. I reminded him that he had true wealth already in his knowledge of the Lord and gifts of the Spirit. That is true wealth! He has a family that loves and respects him. What a wealthy man indeed! He freely gave of that spiritual wealth, and if you asked for the little finances he had, he would share that with you as well. The wealthiest man I knew lived completely from the hand of God. He trusted God would provide his every need as he ministered to dying people in a hospital of a foreign land. God always met his need. These men gave freely and they gained even more.

On the other hand I know some extremely wealthy people who begrudge giving any amount. They live in the poverty of their own spirit. They have never learned that it is more blessed to give than to receive (Acts 20:35). They never experienced the wonder that you cannot out-give God. That is a sad thing, for they will give an account to God for hoarding their resources.

God invests in us spiritual and physical wealth so that we can be His hands of mercy and grace in the world. If we stand at the judgment and declare that we buried it because we knew we would have to account for it all, He will say to us what he said to the unfaithful steward.“Wicked and slothful servant!” (Matthew 25:26) God help us to realize this Kingdom principle.

Meditation: To give is to be blessed and to increase, but to hoard in fear is to wither and die.

For you created my inmost being; you knit me together in my mother’s womb. I praise you because I am fearfully and wonderfully made; your works are wonderful, I know that full well.
Psalm 139:13-14
DailyVerses.net