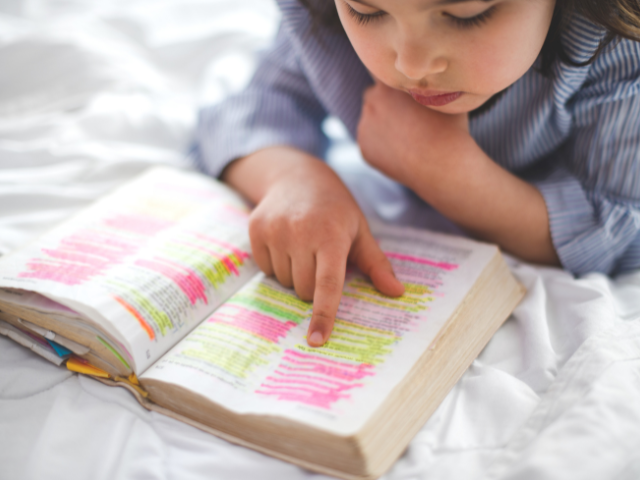 For years, I believed God’s Word would come to pass for others; but recently, the Lord convicted me of not taking it personally (as He intended). Can anyone relate? So, today, I declare that I believe every Scripture written in God’s Word and I take every promise and every “I will” of God personally.

Jesus paid a high penalty for our sins so we don’t have to—because we can’t and we were never meant to. Sometimes, I fall short in receiving God’s free gift of forgiveness. For me, this way of thinking began in childhood. Each day before Mother came home from work, my sister and I straightened up the house and got dinner started. Except one day, we had too much fun and made a major mess of everything. I don’t recall what we did but when she came home, Mother was speechless with shock and anger. Later, I spent weeks trying to smooth things out. And, that is the way it goes in many relationships. Something goes awry and we work to restore peace and harmony. This is only right and good; however, we tend to pass this mindset on to our relationship with God.

As a young Christian, I felt like I needed to do a lot of good deeds to make up for my wrongs—like paying penance to be forgiven. Not so with God.

In the Old Testament, the priests offered sacrifices to God for the forgiveness of sins. Hebrews 10:1-3 (abbreviated) says:

“For the law … can never by the same sacrifices which they offer continually year by year, make perfect those who draw near … in those sacrifices there is a reminder of sins year by year.”

The law shows us what behaviors God considers sins. The sacrifices didn’t remove the tendency to sin or the memory of sinful deeds. A pastor I know shared how the enemy kept reminding him of past sins. He responded by loudly thanking God that “I am forgiven and cleansed by Christ! I’m a new man!” When we struggle, we can submit it to the Lord and keep pressing in to Him. The old will be flushed out by the increase of the life of Christ within us. Until the Apostle Paul met Christ, he was a murderer who persecuted believers. In Christ, he became a transformed man who said “forget the things of the past.”  Paul went on to write one-half of the New Testament.

By receiving His forgiveness, we can also forgive ourselves. He’s given us grace so we can extend grace to ourselves. Let the Lord lift the burden of guilt from past wrongs. He forgot them and so should we. We ARE forgiven!  Friends, let’s resist the tendency to “make it up” to God for past failures. Going forward, let’s believe His Word and receive His forgiveness that removes all guilt!

“If we confess our sins, He is faithful and righteous to forgive us our sins and to cleanse us from all unrighteousness” (1 John1:9, emphasis mine).

Now I understand that when Jesus comes into our hearts and we choose to live for Him, Christ personally dwells inside us. He washes and cleanses us and gives us His nature. Wow. Now, this deserves a shout of Hallelujah!

Lord Jesus, Thank You for Your massive love. You paid the price for all our sins. We choose to receive Your forgiveness and cleansing. We choose to forgive ourselves and live free from guilt in the peace and freedom You died to give us.

Streams in the Desert – November 13

“I have chosen him so that he may command his children and his household after him to keep the way of the Lord by doing what is right and just. Then the Lord will give to Abraham what he promised him.” (Gen 18:19)

God wants people that He can depend upon. He could say of Abraham, “I know him, that he will command his children … that the Lord may bring upon Abraham that which he hath spoken.” God can be depended upon; He wants us to be just as decided, as reliable, as stable. This is just what faith means.

God is looking for men on whom He can put the weight of all His love and power and faithful promises. God’s engines are strong enough to draw any weight we attach to them. Unfortunately the cable which we fasten to the engine is often too weak to hold the weight of our prayer; therefore God is drilling us, disciplining us to stability and certainty in the life of faith. Let us learn our lessons and stand fast.
—A. B. Simpson

God knows that you can stand that trial; He would not give it to you if you could not. It is His trust in you that explains the trials of life, however bitter they may be. God knows our strength, and He measures it to the last inch; and a trial was never given to any man that was greater than that man’s strength, through God, to bear it.

The certainty and freeness of divine grace

‘All that the Father giveth me shall come to me; and him that cometh to me I will in no wise cast out.’ John 6:37

It says, ‘Him that cometh,’ and this shuts out no comer. John Newton was a blasphemer of so gross a kind, that even the sailors in the vessel in the storm said that they should never get to port with such a sinner as John Newton on board; but he came to Christ and was not cast out, but lived to preach the Word. John Bunyan was so foul a blasphemer, that even a woman of the street, who passed him by and heard him swear, said that he was enough to corrupt the whole parish; and he was astonished that a woman of so bad a character should so rebuke him. John Bunyan came to Jesus, and he was not cast out; he lived to have the honour of suffering for his Master, and to be the winner of multitudes of souls. Saul of Tarsus had stained himself with the blood of saints; he was a very wolf after Christ’s sheep. He was not satisfied with worrying them in his own land, so he obtained power to persecute them in Damascus; but when he fell upon his face and cried for mercy, he was not cast out. Manasseh was blood-red with the murder of God’s prophets. It is said that he cut the prophet Isaiah in two with a saw; and yet, when out of the low dungeon he cried for mercy, he was not cast out. So that any kind of ‘him’, though he may have been a persecutor even unto blood, though he may have been exceeding mad against God till he could not speak without blasphemies against the name of Christ, though he hated everything which is good, and despised everything held precious by believing men and women, yet if he comes to Christ, he shall not be cast out.

For meditation: Even the most scandalous of past sins will not be held against those who come to Christ for forgiveness and cleansing (1 Corinthians 6:9–11). They are the ones who go to heaven, not those who think that they are good enough as they are (Matthew 21:31–32). Those who assume that their ‘goodness’ guarantees them a place in heaven are the sinners who will be ‘cast out’ (Matthew 8:11–12).

When the Israelites saw it, they said to each other, “What is it?” For they did not know what it was.

The Israelites in the wilderness had little faith in God’s goodness, and they had little imagination for how God might provide for them. But, just as God had promised, they found “thin flakes like frost” on the desert floor. According to Numbers 11:7-8, these flakes were like coriander seed, and cakes of it tasted like they were made with olive oil. The flakes were whitish-yellow like a resin called bdellium. It is worth noting here that bdellium was one of the valuable resources in Eden (Genesis 2:12, RSV). Perhaps the author was pointing out that just as God provided resources in Eden, God was again providing for his people in the desert.

The Israelites’ first reaction to this substance is understandable: “What is it?” Moses replied that it was bread from God. Eventually it became known as manna, which sounds like the Hebrew for “What is it?” The people did not fully understand this food, but they could still receive it and be nourished by it.

Throughout Christian history many scholars have argued about the bread and wine (or juice) given at the Lord’s Supper. What is it, really? How does God use it to give us spiritual nourishment? These are important discussions that can help us reflect on God’s power and love. But it is more important to eat and drink, remembering that Jesus gave himself for the forgiveness of our sins.

Lord, your ways can be mysterious, but we know that your love is more than enough for us, in Jesus. Amen.

Blessed are those who are persecuted because of righteousness, for theirs is the kingdom of heaven.
Matthew 5:10
DailyVerses.net