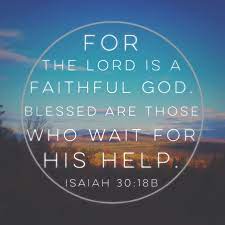 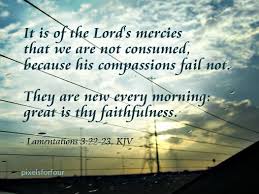 Great Is His Faithfulness 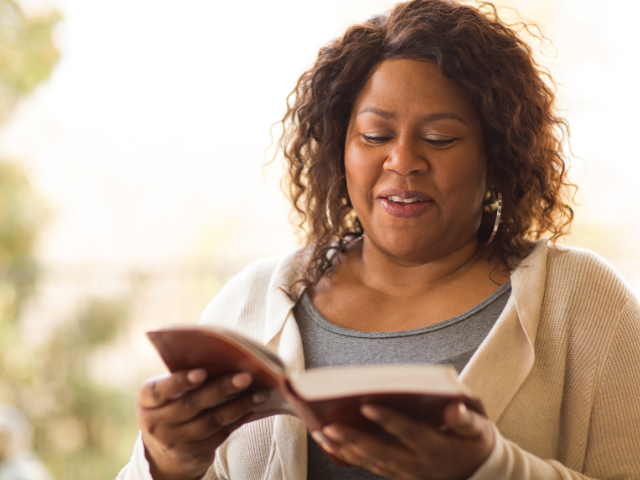 The faithful love of the LORD never ends! His mercies never cease. Great is his faithfulness; his mercies begin afresh each morning. I say to myself, “The LORD is my inheritance; therefore, I will hope in him!” (Lamentations 3:22-24 NLT).

At the time Jeremiah wrote this book, he was seeing with his own eyes how the city of God, Jerusalem was destroyed by the armies of the Babylonian empire. The situation at that time was really very sad. Here are some quotes about the city of Jerusalem’s situation from the book of Lamentations:

Judah has been led away into captivity, oppressed with cruel slavery. She lives among foreign nations and has no place of rest. Her enemies have chased her down, and she has nowhere to turn (Lamentations 1:3).

I have cried until the tears no longer come; my heart is broken. My spirit is poured out in agony as I see the desperate plight of my people. Little children and tiny babies are fainting and dying in the streets (Lamentations 2:11).

They cry out to their mothers, “We need food and drink!” Their lives ebb away in the streets
like the life of a warrior wounded in battle. They gasp for life as they collapse in their mothers’ arms (Lamentations 2:12).

“O LORD, think about this! Should you treat your own people this way? Should mothers eat their own children, those they once bounced on their knees? Should priests and prophets be killed within the Lord’s Temple? (Lamentations 2:20).

A similar situation is happening in the country where I live and serve God. We are grieving every day at the destruction and brutality happening day in and day out. Many families are struggling to have food and shelter. Many young people have lost their physical freedom and hope for the future. Every day we are all going through so much grief!

One time I had the opportunity to visit a refugee camp and do interviews with them. There was a child who told me that he wanted to go home. He said, “I have lived in this camp for eight months, I want to go home but I have no home—my house and the houses of my friends were destroyed.” I cried hearing this. The joy has gone from us.

BUT, in the midst of this grief, Jeremiah remembers how great and good our Lord is; he wrote the faithful love of the LORD never ends! His mercies never cease. Great is his faithfulness; his mercies begin afresh each morning.

I also want to believe this and say the same. I put my hope in Him alone, who is mighty and faithful to His people! Difficulties and challenges may come in our lives, but we have a God who is full of mercy. Let’s put our hope in Him!

The evil and its remedy

“The iniquity of the house of Israel and Judah is exceeding great.” Ezekiel 9:9“The blood of Jesus Christ his Son cleanseth us from all sin.” 1 John 1:7

There are some sins that show a diabolical extent of degraded ingenuity—some sins of which it is a shame to speak, or of which it is disgraceful to think. But note here: “The blood of Jesus Christ cleanseth from all sin.” There may be some sins of which a man cannot speak, but there is no sin which the blood of Christ cannot wash away. Blasphemy, however profane; lust, however bestial; covetousness, however far it may have gone into theft and plundering; breach of the commandments of God, however much of riot it may have run, all this may be pardoned and washed away through the blood of Jesus Christ. In all the long list of human sins, though that be long as time, there stands but one sin that is unpardonable, (Matthew 12:31) and that one no sinner has committed if he feels within himself a longing for mercy, for that sin once committed, the soul becomes hardened, dead, and seared, and never desires afterwards to find peace with God. I therefore declare to thee, O trembling sinner, that however great thine iniquity may be, whatever sin thou mayest have committed in all the list of guilt, however far thou mayest have exceeded all thy fellow-creatures, though thou mayest have distanced the Pauls and Magdalens and every one of the most heinous culprits in the black race of sin, yet the blood of Christ is able now to wash thy sin away. Mark! I speak not lightly of thy sin, it is exceedingly great; but I speak still more loftily of the blood of Christ. Great as thy sins are, the blood of Christ is greater still. Thy sins are like great mountains, but the blood of Christ is like Noah’s flood; twenty cubits upwards shall this blood prevail, and the top of the mountains of thy sin shall be covered.

For meditation: The price of life is far too costly for man to achieve his redemption (Psalm 49:7-9), but the Prince of life has achieved it

Streams in the Desert – November 14

I tell you the solemn truth, unless a kernel of wheat falls into the ground and dies, it remains by itself alone. But if it dies, it produces much grain. (John 12:24)

Go to the old burying ground of Northampton, Mass., and look upon the early grave of David Brainerd, beside that of the fair Jerusha Edwards, whom he loved but did not live to wed.

What hopes, what expectations for Christ’s cause went down to the grave with the wasted form of that young missionary of whose work nothing now remained but the dear memory, and a few score of swarthy Indian converts! But that majestic old Puritan saint, Jonathan Edwards, who had hoped to call him his son, gathered up the memorials of his life in a little book, and the little book took wings and flew beyond the sea, and alighted on the table of a Cambridge student, Henry Martyn.

Poor Martyn! Why should he throw himself away, with all his scholarship, his genius, his opportunities! What had he accomplished when he turned homeward from “India’s coral strand,” broken in health, and dragged himself northward as far as that dreary khan at Tocat by the Black Sea, where he crouched under the piled-up saddles, to cool his burning fever against the earth, and there died alone?

To what purpose was this waste? Out of that early grave of Brainerd, and the lonely grave of Martyn far away by the splashing of the Euxine Sea, has sprung the noble army of modern missionaries.
—Leonard Woolsey Bacon

“Is there some desert, or some boundless sea,
Where Thou, great God of angels, wilt send me?
Some oak for me to rend, Some sod for me to break,
Some handful of Thy corn to take
And scatter far afield,
Till it in turn shall yield
Its hundredfold
Of grains of gold
To feed the happy children of my God?

“Show me the desert, Father, or the sea;
Is it Thine enterprise? Great God, send me!
And though this body lies where ocean rolls,
Father, count me among all faithful souls.”

Proverbs 18:19 19An offended brother is more unyielding than a fortified city, and disputes are like the barred gates of a citadel.

19:11 11A man’s wisdom gives him patience; it is to his glory to overlook an offense.

Jesus warned us that it would be impossible for offenses not to come. We can offend others with even a compliment. But when those offenses come our way, or we accidentally offend another, we have a difficult task before us. Jesus told us to love one another. Offense is one of the chief snares in keeping us from obeying that command. If we have offended someone, we will find the person is more unyielding than a fortified city. They think you meant to harm. To keep from being harmed again, they set up walls of distance, walls of distrust. Winning a fortified city was a long drawn out effort. That is what it takes to win someone we’ve offended. It is better to carefully guard our words than to win over someone who has been offended. Be prepared for the long haul and don’t give up.

On the other hand, if you are the offended party, let wisdom give you patience. Often offense comes from misunderstanding. Clarify and understand the offender’s words and motives. Give him time to see things differently. If it is pure animosity, be gracious enough to overlook it. You are more likely to win that person by refusing to be offended. Wisdom teaches us that to accept offense is to harm only our self. To receive an offense will only make the offender have a sense of justification. To overlook an offense protects your heart from bitterness and from the damage of words. That is easier said than done, but it helps to consider that it is the wise thing to do. It is to your glory. It is the example Jesus set for us.

Consider: Refuse to be offended. Endeavor not to offend.

In God, whose word I praise— in God I trust and am not afraid. What can mere mortals do to me?
Psalm 56:4
DailyVerses.net