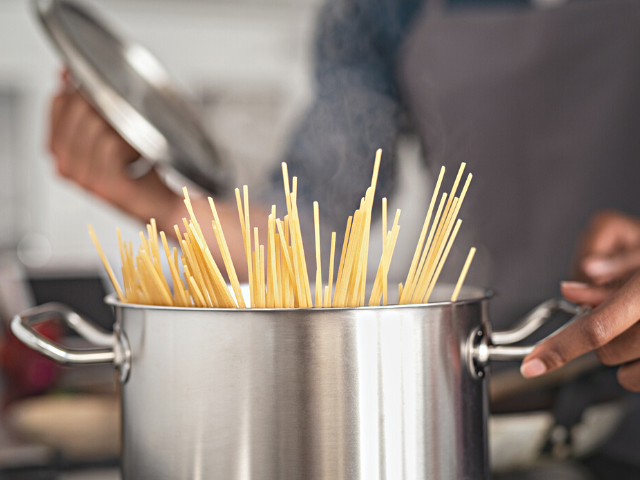 “Happy birthday,” Martha said to my husband. She had been to the house earlier in the day and had learned it was his birthday. She told us that God had instructed her to give him an original painting that was her own work, but first she shared the beautiful poem she had written about a homeless man. When Martha had finished reading the moving poem, she turned the painting around for us to see. Everyone there gasped. The man in the painting, that she had painted years ago, was identical to the man we had just fed supper. She had left before he had arrived, and he was long gone before she came back.

How could she have painted this man years before we had even met him?

He was a kind man. We talked about the Lord and shared our spaghetti with him. I remember he commented that it was a little bland. I agreed and said, “We do the best we can with what we have. God is faithful to provide.” He asked me if I wanted some Italian herbs to add to the sauce next time and I agreed that would be nice. The conversation turned to other things and before I knew it, he had left.

Who was he? I may never know, but I wonder… Was he just a random homeless man or even an angel?

Keep on loving each other as brothers and sisters. Don’t forget to show hospitality to strangers, for some who have done this have entertained angels without realizing it! Hebrews 13:1-2

All I know is I had never seen him before nor after this event.

God is so faithful. Angel or man, God heard my conversation with him. Shortly after this happened, a friend who knew nothing of this story contacted me and said, “God put you on my heart and told me to clean out my freezer and give the meat to you. He also told me to give you my big container of Italian herbs and some other spices.”

I was astonished again that God cared about me so much to be in the details. He did not want me to just eat. He wanted me to enjoy what He provided!

He did not stop with just instructing us to eat; He also made it enjoyable.

Then God said, “Look! I have given you every seed-bearing plant throughout the earth and all the fruit trees for your food.” Genesis 1:29

God did not have to make it taste good. The very fact that we can enjoy what we eat is evidence of His love for us and for everyone. He wants us to share that love.

Hebrews 13 is full of instructions. It starts with loving others, then goes on to tell us how. What a blessing!

Prayer: Help us to love like You do. Help us to grow closer to You—and help us to appreciate all the little things You have done out of Your love for us. In Jesus’ name. Amen!

Where Are the Other Nine? – Thanksgiving Devotional

“And Jesus answered and said, ‘Were there not ten cleansed? But the nine–where are they? Was no one found who turned back to give glory to God, except this foreigner?'”  Luke 17:17-18

In Luke 17, we read the story of the ten lepers. These ten guys had the dreaded, disfiguring disease that made a person unclean, unfit for society, and virtually subhuman. The tremendous physical toll inflicted by this incurable disease was only surpassed by the great emotional toll of feeling worthless, vile, and unlovable.

When these men saw Jesus, they cried out, “Jesus, Master, have mercy on us!” (Luke 17:13).  Jesus responded with compassion and a challenge, telling them to show themselves to the priests, an obvious reference to Leviticus 14 about the cleansing of a leper.  Luke 17:15 says, “As they were going, they were cleansed” (Luke 17:14).  Do you see that?  “AS THEY WERE GOING, they were cleansed.” That’s always the way it works with faith.  You have to believe God’s Word enough to obey it.  When you take a step of faith, then you see God do miracles.

Nine of them scurried away to enjoy their great blessing.  But one turned back … and he was a hated Samaritan.  This guy was also overcome with exhilaration at his cleansing, and he wanted to give thanks and praise to the One who made it possible. He couldn’t dream of taking another step without glorifying God and expressing his sincere gratitude. And the Lord responded to his thanksgiving by bestowing on him a far greater gift, the gift of salvation.

Interestingly, Jesus was wondering aloud about the other guys. Where were they? Why was this “foreigner” alone in his thanks?

The question for our day is clear: why do so many experience the goodness of God and so few return with grateful thanksgiving?

Let me challenge you as I challenge myself to emulate the Samaritan in this story and give thanks, first and foremost. To be sure, thanksgiving can be a sacrifice.  Life can be cruel and hard. Circumstances can knock us down and leave us devastated. If we are not careful, we can easily become disillusioned, depressed, critical, cynical, and bitter.

This is the key to rising above the circumstances: focus on what you do have, not what you don’t have. Rejoice in the Lord! Give thanks for the cross and the empty tomb! Give thanks for His unfailing love! I truly believe the greatest witnesses for Christ are those who have experienced the worst of life and yet have the best of attitudes, continuing to praise God no matter what.

Make this Thanksgiving a Thanksgiving to remember as you set aside time to glorify the King. He will be honored, and you will be blessed.

Blessed is anyone who takes no offense at me. (Luke 7:23)

It is sometimes very difficult not to be offended in Jesus Christ. The offenses may be circumstantial. I find myself in a prison-house—a narrow sphere, a sick chamber, an unpopular position—when I had hoped for wide opportunities. Yes, but He knows what is best for me. My environment is of His determining. He means it to intensify my faith, to draw me into nearer communion with Himself, to ripen my power. In the dungeon my soul should prosper.

The offense may be mental. I am haunted by perplexities, questions, which I cannot solve. I had hoped that, when I gave myself to Him, my sky would always be clear; but often it is overspread by mist and cloud. Yet let me believe that, if difficulties remain, it is that I may learn to trust Him all the more implicitly—to trust and not be afraid. Yes, and by my intellectual conflicts, I am trained to be a tutor to other storm-driven men.

The offense may be spiritual. I had fancied that within His fold I should never feel the biting winds of temptation; but it is best as it is. His grace is magnified. My own character is matured. His Heaven is sweeter at the close of the day. There I shall look back on the turnings and trials of the way, and shall sing the praises of my Guide. So, let come what will come, His will is welcome; and I shall refuse to be offended in my loving Lord.
—Alexander Smellie

Blessed is he whose faith is not offended,
When all around his way
The power of God is working out deliverance
For others day by day;

Though in some prison drear his own soul languish,
Till life itself be spent,
Yet still can trust his Father’s love and purpose,
And rest therein content.

‘The last enemy that shall be destroyed is death.’ 1 Corinthians 15:26

To live well is the way to die well. Death is not our first foe but the last; let us then fight our adversaries in order, and overcome them each in its turn, hoping that he who has been with us even until now will be with us until the end. Notice, dear friends—for herein lies the savour of the thought—it is the last enemy. Picture in your mind’s eye our brave soldiers at the battle of Waterloo; for many weary hours they had been face to face with the foe; the fight had lasted so long and been so frequently renewed that they seemed to have encountered successive armies, and to have fought a dozen battles; charge after charge had they borne like walls of stone: imagine then that the commander is able to announce that they have only to endure one more onslaught of the foe. How cheerfully do the ranks close! How gallantly are the squares formed! How firmly their feet are planted! ‘Now,’ say they, ‘let us stand like a wall of rock; let no man shrink for a moment, for it is the last the enemy can do. He will do his worst; but soon he will be able to do no more but sound to boot and saddle, and leave the field to us.’ The last enemy! Soldiers of Christ, do not the words animate you? Courage, Christian, courage; the tide must turn after this; it is the highest wave that now dashes over you; courage, man, the night must close; you have come to its darkest hour; the day star already dawns! Now that you are dying, you are beginning to live. The last enemy conquered! Does it not bring tears to your eyes to think of bearing your last temptation? Little care we who the foe may be, if he be but conquered and be but the last.

For meditation: Christ’s veteran soldiers were calm as they prepared to do battle with the last enemy (2 Timothy 4:6–8; 2 Peter 1:12–15). ‘Thanks be to God, which giveth us the victory through our Lord Jesus Christ’ (1 Corinthians 15:57). Do we have a similar attitude to our own death?