A Flood of Thanksgiving 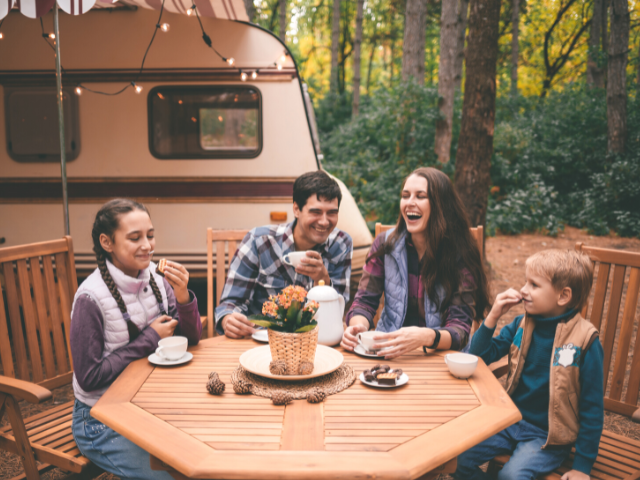 My heart sank as I awoke to find the floor of our camper trailer soaked with water. All I could think was, “No! Not again, Lord…” I’d rushed for days to tear out the inside of the aging RV, remove any mold, and lay new plank flooring so our two toddlers could run around safely—all while living in it as a family of four with two dogs. Throughout the project, one thing after another had gone wrong, and I’d been injured multiple times. Now, I needed to rip out the floor and start again.

I couldn’t afford this kind of mistake. The worst part was how hopeful we’d become the night before, only to have it snatched away. A terrible storm had buffeted the trailer all night, and we’d just been praising God that no water had come in. Instead, the place managed to flood from the inside, as my tub overflowed from a leaky faucet. Shock gave way to desperation, and then my heart began to fill with rage. How could God let this happen? We had an agreement. I’d asked for help, and He was supposed to answer!

As it turns out, His Word had an answer:

What causes quarrels and what causes fights among you? Is it not this, that your passions are at war within you? You desire and do not have, so you murder. You covet and cannot obtain, so you fight and quarrel. You do not have, because you do not ask. You ask and do not receive, because you ask wrongly, to spend it on your passions. (James 4:1-3 ESV)

God showed me something in my heart that fateful day in the RV. My passions were at war within me. My heart was stealing my joy in the Lord and keeping me from being able to react decisively to solve the situation—which affected my family.

There was no solution but thankfulness—through a return to the cross. God has called us to give thanks in all circumstances, but I couldn’t do it that day. I had to bow before God and yield my sinful self to Him. God had promised that I have been crucified with Christ. It is no longer I who live, but Christ who lives in me. (Galatians 2:20)

Jesus had given His life to win me a place at the Father’s side and offer me a glorious inheritance for eternity, and He had promised His presence in life now. I had good reason to be thankful! And my angry, fearful old identity had been nailed to the cross. It was buried. I didn’t have to be that man anymore.

As a new man, I could give God thanks for a new nature and His covenant promises, and I could rise up to care for my family with joy through trials. God was enough, as His Word reminds us, be content with what you have, for he has said, “I will never leave you nor forsake you.” (Hebrews 13:5)

This Thanksgiving, turn your heart towards God in thankfulness. Let Him become the passion of your soul, and none of this world’s challenges can break you, because He will never leave. It was the day before Thanksgiving.  For the second year in a row, I did not have the means to provide turkey or any other festive food that would make the day special for my three kids. As a single mom of three in Minnesota, I was facing another year of existing on food stamps, welfare, and any other kind of public assistance that I could find. How was I going to come up with something even close to a traditional Thanksgiving dinner?

A friend told me about a church with a food ministry that was handing out boxes of food that included a turkey. Hoping it was not too late, I got in the car (while trying to ignore the  transmission fluid leaking into the snow) and headed to that church. The building was still open when I got there. Entering the building, I was thanking God for this unexpected opportunity.

Greeted by a cheerful woman, I was led to a big room with tables configured in a horseshoe arrangement. Pantry food was sorted out by type on the tables. She handed me a box that already had a small turkey in it, explaining that this was the last turkey they had. I could choose what I wanted to go with it off the loaded tables and add the items to my box. Gratefully, I filled it with a box of stuffing, some canned vegetables and a pie filling. After sincerely thanking her, I carried the box out to my leaking, rusty car.

Before I could load it in my vehicle, the woman came running out and asked me to come back inside and sign a paper to confirm that I had received a donation. Setting the box down in the  snow bank next to my car, I followed her back inside.

The woman explained the volunteers were closing the donation center down in the next few minutes and asked if I would like to fill a couple of more boxes with cans and packaged items. I was elated by her offer and together we filled two more boxes. Then she walked outside with me, each of us carrying a box of precious food. It was enough to eke out several more meals!

As we approached the car, I saw nothing but snow where the turkey box had been set down. “I cannot believe it!” I exclaimed.  The kind woman said, “Well, dear, someone must have needed the food more than you did!”

Despite my disappointment, those words really resonated with me. Most probably she was right!  The Lord reminded me of the occasions that I had myself been tempted and contemplated theft in grocery stores in the last year during desperate times.

We loaded the two extra boxes into the car, and I returned home thankful for the donations I did receive – but also sad about the missing turkey. Unloading the items from the two boxes into my almost bare cupboards gave me a sense of relief that tummies would not rumble for a few days.

Just as I finished and sat down, the phone rang. A friend I had not talked to for some time was calling. “We would like to invite you and your children to join our family tomorrow for Thanksgiving dinner,” she said.

God came through abundantly and surprised us with joy!  He always provides! In fact, for the two years my family and I spent on food stamps and welfare, barely making it through, He always provided for our needs!  Not our wants — but our needs.  And there were times, like this memorable Thanksgiving, He blessed us with something extra!  God is good all the time!

Food For the Hungry

Jesus then took the loaves, gave thanks, and distributed to those who were seated as much as they wanted. He did the same with the fish.

In the Bible we learn that God is especially concerned about a few groups of people. That’s because these people are often taken advantage of: the poor, orphans, widows, and foreigners. And Jesus, the Son of God, who is fully human and fully God, showed the same concern for these groups.

In particular, Jesus fed the poor in abundant and miraculous ways. One of the marks of God’s kingdom is that everyone should have enough, or as John 6:11 says, “as much as they wanted.”

When Jesus gave the Lord’s Supper to his disciples, he did that to feed them physically and spiritually. And we should know that in the early church, this sacred meal was often cele­brated as an actual meal, not just with a small bit of bread and wine (or juice), as many do in their church services today. Perhaps our churches would do well to pass out ample slices of bread, and full cups of juice so that people could truly experience God’s generosity (but I digress).

Because Jesus has been so generous to us, we are empowered and encouraged to be generous to others.

As you receive Christ’s gifts in the Lord’s Supper, try to hold hungry people in your mind and heart—including people you know in your local community and people you don’t know in other parts of the world.

What are you thankful for? We gather, every year at this time, to reflect on the blessings of God over the past year. But in most families, Thanksgiving is less about real gratitude and more about stuffing your face, watching football, and hanging with the family. Some actually dread Thanksgiving, because they’re forced to sit in a room with people they really don’t enjoy.

Now I’m all in favor of the food and the football. But this year, let’s make Thanksgiving about giving and about thanks. This year, more than any, might force us to dig deeper. For many, it will mark a year since they’ve had employment. For others, Thanksgiving will bring another reminder that they haven’t found that significant other. And there are those couples who have to face the family questions of why they still can’t have children.

For many, this was a year marked by pain. So how do we summon the gratitude? Well, if you’re a Christian, you’re basis is not your circumstances, but something greater. Paul tells the people of Thessalonica that they could “give thanks in everything.” Why? Because this was the “will of God in Christ.”

In other words, followers of Christ believe that every piece of hardship is a grace gift from the Lord, sent for their growth, sanctification, and further intimacy with the Almighty. We don’t believe we’re here on this earth all alone. We believe God is firmly in charge.

Though life may get hard–and it does–it all falls under God’s sovereign will. And so we give thanks.

As Americans, we really have cause for gratitude. I have to periodically remind myself of this and remind my family. We so easily get caught up in the easy lust for more stuff. Bigger house, nicer car, better clothes, newest gadgets. But then I remember my travels to third world countries, where I’ve seen real poverty–and real gratitude on the part of the Christians there.

Tonight, my kids will go to bed with full stomachs. They’ll have a roof over their heads. They will have two parents in the next room. They will ride in a nice car. They will have a future that includes a good education. All of those are things most kids in the world don’t have. And so, they should be grateful.

Let’s not sit around the table carping about the election, complaining about our job status, whining about injustices from friends. Let’s instead reset our gratitude meters and offer genuine, heartfelt thanks to God. For salvation in Christ. For His daily care. And for friends and family He graciously provides. Oh, and for wives that allow us to stuff our faces and watch football.

Be wise in the way you act toward outsiders; make the most of every opportunity. Let your conversation be always full of grace, seasoned with salt, so that you may know how to answer everyone.
Colossians 4:5-6
DailyVerses.net