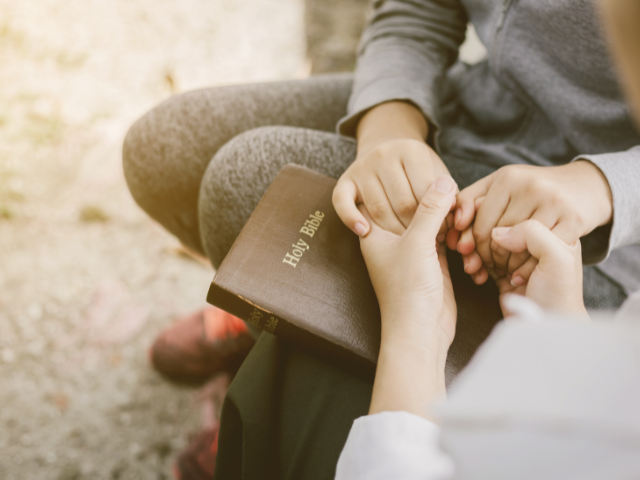 When I was 24 years old, I remember feeling an unexpected desire to pray for two childhood friends I had not seen in years. Six years after high school graduation, the Holy Spirit gave me this intense evangelical impulse to pray for their salvation. We had little contact after high school, but I would hear updates on their lives through mutual friends. (This occurred right before the internet took off, so there was no email or social media at that point.) I gathered that my two friends were generally doing fine, but I did know that neither one knew the Lord or attended church then.

So, I started including these two former classmates in my daily prayers.

For a couple of years, nothing seemed to be happening. One old friend was living down in Central America at that time. The other was climbing his career ladder several hundred miles away.

Three years later, my friend living overseas returned to town for an extended visit. During his time back home, we reconnected and spent time “hanging out.” I also began sharing my faith with him. It’s hard to recall what I said during those weeks of catching up. All I know is that I invited him to church, and one night after an evening service—we were talking in my car, and the next thing I knew, I’m leading my friend in the salvation prayer!

Praise God! He answered my prayers! My friend even returned to my church several days later and got baptized! He’s been living for the Lord ever since.

Meanwhile, 25 years later – I’m still praying for my other classmate.

As far as I can tell, he doesn’t seem any closer to God than when my prayers started. Two-and-a-half decades in, I cannot see any progress from my perspective.

I’m sure the Lord is teaching me many things through this experience: patience, faith, and respecting the individual. In the tenth chapter of Matthew, we read through the names of each disciple:

Now the names of the twelve apostles are these: first, Simon, who is called Peter, and Andrew his brother; James, the son of Zebedee, and John, his brother; Philip and Bartholomew; Thomas and Matthew the tax collector; James the son of Alphaeus, and Lebbaeus, whose surname was Thaddaeus; Simon the Cananite, and Judas Iscariot, who also betrayed Him. (Matthew 10:2-4 NKJV)

When you think about how Jesus went about calling His twelve disciples—He didn’t call them all at once. Jesus called each disciple in His own time.

Each disciple had a unique personality, a different background, outlook, and various skill set. Since His earthly ministry, for over 2,000 years, Jesus has called billions of individuals—some folks respond quickly, while others may take years—or decades—to accept Christ into their hearts.

Sometimes God tests our faith. I know that the Lord can do anything. My unsaved friend is neck-deep in worldly matters and cares and has displayed contempt for Christianity. His salvation will be a miracle indeed.

Although the results are out of my hands, my God can make anything possible.

When Jesus sent out the twelve to spread the Good News, He said,

And whoever will not receive you nor hear your words, when you depart from that house or city, shake the dust from your feet. (Matthew 10:14)

The decision to follow Jesus is up to my friend. However, I will continue to stand in faith and pray for his salvation. The Lord wants me to pray—not preach at him in person or email him Bible verses. Sometimes God does use those approaches. But in my case, the Lord wants me to pray. So, I am still asking the Lord to orchestrate my old friend’s salvation however He sees fit. Yes, I’ve been praying a long time for this. But I trust that the timing—and the results—are God’s will.

Sometimes we don’t know why the Lord asks us to do things His way. But we should follow His lead anyway—because the Lord is omnipotent. Trust His plan.

The sin of unbelief

“And that lord answered the man of God, and said, Now, behold, if the Lord should make windows in heaven, might such a thing be? And he said, Behold, thou shalt see it with thine eyes, but shalt not eat thereof.” 2 Kings 7:19

“Thou shalt shall see it with thine eyes, but shalt not eat thereof.” It is so often with God’s own saints. When they are unbelieving, they see the mercy with their eyes, but do not eat it. Now, here is corn in this land of Egypt, but there are some of God’s saints who come here on the Sabbath, and say, “I do not know whether the Lord will be with me or not.” Some of them say, “Well, the gospel is preached, but I do not know whether it will be successful.” They are always doubting and fearing. Listen to them when they get out of the chapel. “Well, did you get a good meal this morning?” “Nothing for me.” Of course not. Ye could see it with your eyes, but did not eat it, because you had no faith. If you had come up with faith, you would have had a morsel. I have found Christians, who have grown so very critical, that if the whole portion of the meat they are to have, in due season, is not cut up exactly into square pieces, and put upon some choice dish of porcelain, they cannot eat it. Then they ought to go without, until they are brought to their appetites. They will have some affliction, which will act like quinine upon them: they will be made to eat by means of bitters in their mouths; they will be put in prison for a day or two until their appetite returns, and then they will be glad to eat the most ordinary food, off the most common platter, or no platter at all. But the real reason why God’s people do not feed under a gospel ministry, is because they have not faith. If you believed, if you heard only one promise, that would be enough.

Even when we don’t understand the mind of God, we can trust the heart of God.

I was signing books one day when a young man came forward for an autograph. He told me he had been on the verge of killing himself but then heard me speaking on television about suicide. After listening, he laid the gun down and dedicated his life to Jesus Christ.

I’ve heard similar stories of the Lord’s intervention in other lives. God does this by leading a person to the gospel. The messenger isn’t responsible for the individual’s salvation. Only God can draw someone to Himself, transform a heart, and change a sinner into a saint.

The world talks about accidents, luck, and fate, but all these terms imply we’re victims of circumstance. The truth is, God is sovereign, and the entire world is under His control. Anything that enters our life—whether it’s blessing or trial—comes because the Lord has a use for it in His plan, which is always for our good.

Sometimes we wonder why God doesn’t put an end to our troubles and hardships; He has the power to do so. But He’s working every event in our life according to the counsel of His will. We won’t understand it all until we see Him in glory. So until then, we must trust Him and His good purposes.

Genesis 15:10-12 10Abram brought all these to him, cut them in two and arranged the halves opposite each other; the birds, however, he did not cut in half. 11Then birds of prey came down on the carcasses, but Abram drove them away. 12As the sun was setting, Abram fell into a deep sleep, and a thick and dreadful darkness came over him.

God entered into a covenant that was an ancient ritual in Abram’s day. It was to verify an inheritance or to confirm an alliance. Animals were cut in half, and each party would walk through the blood. They were in picture saying, “If either party breaks the agreement (covenant) let us be like these animals, chopped in half and our blood shed.” In this case God alone walked through the blood while Abram was in a deep sleep. It meant that God had promised to pay with His own blood if either party broke the agreement.

The parties involved would often exchange weapons. That meant that your enemies are now mine and mine are yours. We will fight beside and for each other. They would also exchange their purses. Your wealth is available to my need and mine for yours. Again, since Abraham did not go through the blood, this is a very one-sided agreement. God has committed Himself to protect and provide for Abraham and his descendants. What a promise for Abraham and his heirs, whom we are by faith! (Galatians 3:29)

Sometimes the covenant had to be reconfirmed if there was doubt as to the commitment of either party. The confirming of the covenant would be to exchange sons. The son of Abram was offered on Mount Moriah, and so was the Son of God. God so loved the world He gave His one and only Son. Abram’s descendants did break the covenant over and over. Eventually when the perfect time had come, God paid with His own blood on the cross.

Meditation: God is my Protector and my Provider. He confirmed His covenant by giving His own Son. What a gracious God!

While he was still speaking, a bright cloud covered them, and a voice from the cloud said, “This is my Son, whom I love; with him I am well pleased. Listen to him!”
Matthew 17:5
DailyVerses.net