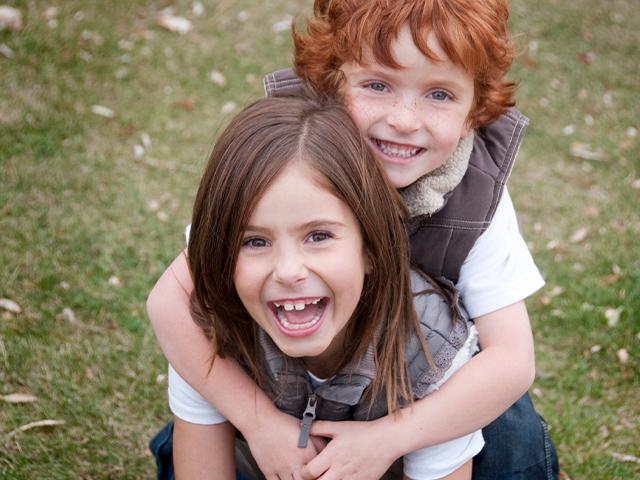 Walking along a country road, a little girl struggles under the weight of a heavy load. A passerby stops to see if she needs help and notices that she’s carrying a rather large baby boy, not much smaller than herself, it seems.

“Don’t you get tired carrying him?”

The story first appeared in Scotland in 1884, in a book on the Parables of Jesus. It showed up in the September 1924 Kiwanis magazine. Then in 1941, Father Edward Flanagan discovered a similar story with a picture in Ideal magazine and got permission to use the motto and image at Boys Town, the home for boys he founded.

The movie Boys Town came out in 1938. A 1941 sequel, titled The Men of Boys Town, included the line, “He ain’t heavy, he’s my brother.” In 1969, Bob Russell and Bobby Scott wrote a song by the same name. It became popular and was sung by dozens of pop singers in the 60s and 70s. In addition, there have been numerous paintings and sculptures on the same theme.

There’s something about the story of the little girl that captivates the imagination and begs to illustrate a key theme in the Bible. In Genesis 4:9, The Lord asks Cain about Abel, and the murderer replies, “Am I my brother’s keeper?” The answer implied in the scripture is simple. “Yes, you are your brother’s keeper.” Leviticus 19:18 instructs the people of God to “Love your neighbor as yourself,” which Jesus quotes in Matthew 22:37. The apostle Paul adds in Galatians 6:2 that we are to “Carry one another’s heavy load, and by doing so, fulfill the law of Christ.”

In Victor Hugo’s timeless novel, Les Misérable, Jean Valjean is a former criminal who changes his name and his lifestyle in order to hide his past, eventually becoming the mayor of a town. But the new chief of police is the very same officer who was a guard at the prison, and is looking to re-arrest Valjean for breaking parole. One day, one of the men in town is trapped under the heavy weight of a horse-drawn wagon, and nobody is able to get him out from underneath. Then, while Javert, the police inspector, is watching, the mayor hefts the weight of the wagon, lifting it off the ground high enough for others to pull the man to safety.

The officer remembers a time when a prisoner had done something similar in the prison, and wonders if this is the same man. Knowing what’s at stake, Valjean risks his identity and his freedom in order to help the man.

The Parable of the Good Samaritan in Luke chapter 10 has a similar motif. In this story, several righteous people see the injured man, but they don’t stop to help him. The one who provides the desperately needed assistance is an outsider, a despised Samaritan, someone you’d least expect to offer help. But he does stop, and he does help. In fact, he pays the innkeeper to care for the man until he returns.

After telling the story, Jesus asks, “Which of these three do you think was a neighbor to the man who fell into the hands of robbers?” An expert in the law replies, “The one who had mercy on him.” Jesus tells him, “Go and do likewise.”

It is this Go and Do Likewise that Jesus asks his followers to put into practice. Are we big enough to see every human being as our neighbor and every person out there as a brother or sister? To put it into the words of the little Scottish girl, “He’s na heavy; he’s mi brither.”

Through The Bible Ministries

Exodus 28:30 (NIV) 30Also put the Urim and the Thummim in the breastpiece, so they may be over Aaron’s heart whenever he enters the presence of the LORD. Thus Aaron will always bear the means of making decisions for the Israelites over his heart before the LORD.

The LORD gave Moses detailed instructions for the Tabernacle (a mobile house of worship) and all its furniture and instruments. The priests had special clothing that they were to wear when they ministered. The High Priest had a breastpiece that had twelve stones representing the twelve tribes of Israel. We do not know the details of the Urim and Thummim, but they are believed to be two additional stones that were used to determine the LORD’s will. Since the Spirit of God came upon people, but did not live in their hearts until Pentecost, the people needed some way to determine the LORD’s leading. Some believe that these stones would glow, one for a ‘yes’ answer, the other for a ‘no’ answer. They were worn over his heart.

Some people today would love to have the Urim and Thummim. I often hear people say, “If God would just send me a fax, it would be so much easier.” God desires us to have an intimate relationship with Him. I’m grateful I live in a day when I do not have to consult a stone, but instead have the Spirit of God living in my heart. If I have been walking in communion with Him, the answer is always clear and very personal. I get a ‘yes’ or a ‘no’ or no glow at all in my heart. No glow at all means I’m not ready to know the answer, or I’m asking the wrong question and need not worry about it now. That is the time when people would like that fax from God. But God is telling us, “Trust me! I know what is best and will tell you when you need to know.” His “not now” answer should be sufficient for us. Trust Him!

Consider: God can speak to your heart when you need an answer as long as you genuinely desire to know His will.

Streams in the Desert – February 16

Though I have afflicted thee, I will afflict thee no more (Nahum 1:12).

There is a limit to affliction. God sends it, and removes it. Do you sigh and say, “When will the end be?” Let us quietly wait and patiently endure the will of the Lord till He cometh. Our Father takes away the rod when His design in using it is fully served.

If the affliction is sent for testing us, that our graces may glorify God, it will end when the Lord has made us bear witness to His praise.

We would not wish the affliction to depart until God has gotten out of us all the honor which we can possibly yield Him. There may be today ” a great calm.” Who knows how soon those raging billows will give place to a sea of glass and the sea birds sit on the gentle waves?

After long tribulation, the flail is hung up, and the wheat rests in the garner. We may, before many hours are past, be just as happy as now we are sorrowful.

It is not hard for the Lord to turn night into day. He that sends the clouds can as easily clear the skies. Let us be of good cheer. It is better farther on. Let us sing Hallelujah by anticipation.
–C.H. Spurgeon

The great Husbandman is not always threshing. Trial is only for a season. The showers soon pass. Weeping may tarry only for the few hours of the short summer night; it must be gone at day break. Our light affliction is but for a moment. Trial is for a purpose, “If needs be.”

The very fact of trial proves that there is something in us very precious to our Lord; else He would not spend so much pains and time on us. Christ would not test us if He did not see the precious ore of faith mingled in the rocky matrix of our nature; and it is to bring this out into purity and beauty that He forces us through the fiery ordeal.

Be patient, O sufferer!  The result will more than compensate for all our trials, when we see how they wrought out the far more exceeding and eternal weight of glory. To have one word of God’s commendation; to be honored before the holy angels; to be glorified in Christ, so as to be better able to flash His glory on Himself-ah! that will more than repay for all.
–Tried by Fire

As the wights of the clock, or the ballast in the vessel, are necessary for their right orderings, so is trouble in the soul-life. The sweetest scents are only obtained by tremendous pressure; the fairest flowers grow amid Alpine snow-solitudes; the fairest gems have suffered longest from the lapidary’s wheel; the noblest statues have borne most blows of the chisel. All, however, are under law. Nothing happens that has not been appointed with consummate care and foresight.
–Daily Devotional Commentary

“Let us take to ourselves from Shiloh the ark of the covenant of the Lord, that it may come among us and deliver us from the power of our enemies.” – 1 Samuel 4:3 NASB

As a nation, Israel had defied God and disobeyed His Word. But, when facing strong opposition from the Philistines, they seemed to forget these past mistakes.

They didn’t feel it was necessary to admit their sins, to repent, or to get their lives right with God. Instead, they concluded that they just needed to have the Ark with them when they went into battle. Then, they felt invincible.

Going into battle, they had complete confidence. They were so confident that they shouted so loudly that “the earth resounded” (v. 5). In the face of this superficial confidence, the Philistines initially reacted with fear but recovered to achieve victory in the ensuing battle. They realized that the Israelites just were operating on emotions.

And they experienced a horrible defeat. All the Israelites fled and “the slaughter was very great” (v. 10). Most devastating, the Ark itself was captured.

Israel had received an emotional boost from the presence of the Ark. But their lives hadn’t changed. They failed to realize that God was more concerned about their relationship with Him, their attitudes, the things they had done, and the condition of their heart.

Seek to be clean in God’s sight. Be honest with Him and allow Him to convict you of any sin. Humble yourself before Him, and accept His forgiveness. Faithfully seek to keep His Word to be sure that you have His blessing.