And God shall wipe all tears from their eyes; and there shall be no more death, neither sorrow, nor crying, neither shall there be any more pain. — Revelation 21:4

We now know what it means to be a Christian. We know the price that was paid to get these elusive things called peace and happiness. I know men who would write a check for a million dollars if they could find peace. Millions are searching for it. Every time they get close to finding the peace found only in Christ, Satan steers them away. He blinds them. He throws up a smoke screen. He bluffs them. And they miss it! But we Christians have found it! It is ours now forever.

We have found the secret of life.

The word peace has been used often in the last forty or fifty years. We talk about peace, and we have many peace conferences; yet, at the moment, it seems that the world is heading toward anything but peace.

“The way of peace have they not known,” the apostle Paul says concerning the human race (Romans 3:17). As we look around, we find that there is little personal, domestic, social, economic, or political peace anywhere. Why? Because we all have the seeds of suspicion and violence, of hatred and destruction within us.

Blessed are the peacemakers. — Matthew 5:9

We are to try for peace. This does not mean pacifism. We are to work for peace. But Jesus also predicted,

Ye shall hear of wars and rumours of wars: see that ye be not troubled: for all these things must come to pass, but the end is not yet. For nation shall rise against nation, and kingdom against kingdom. — Matthew 24:6-7

Peace can be experienced only when we have received divine pardon — when we have been reconciled to God and when we have harmony within, with our fellow man and especially with God. “There is no peace, saith my God, to the wicked” (Isaiah 57:21). But through the blood of the Cross, Christ has made peace with God for us and is Himself our peace. If by faith we accept Him, we are justified by God and can realize the inner serenity that can come to man through no other means. When Christ enters our hearts, we are freed of that haunting sense of sin. Cleansed of all feeling of contamination and unfitness, we can lift up our heads secure in the knowledge that we can look with confidence into the face of our fellow men.

When a man’s ways please the Lord, He maketh even his enemies to be at peace with him. — Proverbs 16:7

Even more important, we know that we can stand before God in the hour of our death with this same feeling of peace and security.

In the Bible Jesus told us there is going to be war until the end of the age. He knew that human nature is not going to change without a spiritual new birth. He knew that the vast majority of the human race were never going to be converted to Him. The vast majority of the people of the world today are not “born again.” So, we always have the potential that violence will break out in a home, in a community, in the world. 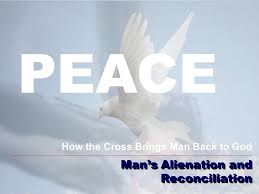 Therefore being justified by faith, we have peace with God through our Lord Jesus Christ. — Romans 5:1

Having made peace through the blood of His cross. — Colossians 1:20

There is a peace that you can have immediately — peace with God.

The greatest warfare going on in the world today is between mankind and God. People may not realize that they’re at war with God. But if they don’t know Jesus Christ as Savior and if they haven’t surrendered to Him as Lord, God considers them to be at war with Him. That chasm has been caused by sin. The Bible says that all have “sinned, and come short of the glory of God” (Romans 3:23). “Oh,” people say, “I have joined the church. I have been baptized.” But has Jesus come to live in their hearts? Not only as Savior, but as Lord?

It would be the greatest tragedy if I didn’t tell you that unless you repent of your sins and receive Christ as your Savior, you are going to be lost.

For God so loved the world, that He gave His only begotten Son, that whosoever [that “whosoever” is you] believeth in Him should not perish, but have everlasting life. — John 3:16

It’s not just head-belief. It’s heart-belief too. It’s total trust, total commitment. We bring everything to the Cross where the Lord Jesus Christ died for our sins. He made peace with God by His death on the Cross.

If we turn our backs on Him and don’t commit our lives to Him, we will have no hope in the future.

For one to have peace with God, it cost the blood of His Son. “With the precious blood of Christ, as of a lamb without blemish and without spot,” said Peter (1 Peter 1:19).

If I were the only person in all the world, Jesus would have died for me, because He loves me. And He loves you! His love is pouring out from the Cross.

“Meet Me in Heaven”

I read a biography of Queen Victoria, and I learned that the queen would sometimes go to the slums of London. She went into one home to have tea with an older lady, and when the queen rose to leave, she asked, “Is there anything I can do for you?” And the woman said, “Yes, ma’am, Your Majesty, you can meet me in Heaven.” The queen turned to her and said softly, “Yes. I’ll be there, but only because of the blood that was shed on the Cross for you and for me.”

Queen Victoria, in her day the most powerful woman in the world, had to depend on the blood of Christ for her salvation. And, so do we. The Bible says that God is the Author of peace (1 Corinthians 14:33). God provided salvation through the cross. He made peace by the shedding of His blood. The war that exists between you and God can be over quickly, and the peace treaty is signed in the blood of His Son Jesus Christ.

Are you at peace with God? Or do the sins of your heart separate you from God?

For the Lord himself shall descend from heaven with a shout, with the voice of the archangel, and with the trump of God: and the dead in Christ shall rise first: then we which are alive and remain shall be caught up together with them in the clouds, to meet the Lord in the air: so shall we ever be with the Lord” (1 Thess. 4:16-17).

It was “very early in the morning” while “it was yet dark,” that Jesus rose from the dead. Not the sun, but only the morning-star shone upon His opening tomb. The shadows had not fled, the citizens of Jerusalem had not awaked. It was still night–the hour of sleep and darkness, when He arose. Nor did his rising break the slumbers of the city. So shall it be “very early in the morning while it is yet dark,” and when nought but the morning-star is shining, that Christ’s body, the Church, shall arise. Like Him, His saints shall awake when the children of the night and darkness are still sleeping their sleep of death. In their arising they disturb no one. The world hears not the voice that summons them. As Jesus laid them quietly to rest, each in his own still tomb, like children in the arms of their mother; so, as quietly, as gently, shall He awake them when the hour arrives. To them come the quickening words, “Awake and sing, ye that dwell in dust” (Isa. 26:19). Into their tomb the earliest ray of glory finds its way. They drink in the first gleams of morning, while as yet the eastern clouds give but the faintest signs of the uprising. Its genial fragrance, its soothing stillness, its bracing freshness, its sweet loneliness, its quiet purity, all so solemn and yet so full of hope, these are theirs.

Oh, the contrast between these things and the dark night through which they have passed! Oh, the contrast between these things and the grave from which they have sprung! And as they shake off the encumbering turf, flinging mortality aside, and rising, in glorified bodies, to meet their Lord in the air, they are lighted and guided upward, along the untrodden pathway, by the beams of that Star of the morning, which, like the Star of Bethlehem, conducts them to the presence of the King. “Weeping may endure for a night, but joy cometh in the morning.”
–Horatius Bonar

“While the hosts cry Hosanna, from heaven descending,

With glorified saints and the angels attending,

With grace on His brow, like, a halo of glory,

Will Jesus receive His own.”

“Even so, come quickly.”

A soldier said, “When I die do not sound taps over my grave. Instead, play reveille, the morning call, the summons to arise.”

But the Lord is faithful, and he will strengthen you and protect you from the evil one.
2 Thessalonians 3:3
DailyVerses.net

I pray that out of his glorious riches he may strengthen you with power through his Spirit in your inner being, so that Christ may dwell in your hearts through faith. And I pray that you, being rooted and established in love.
Ephesians 3:16-17
DailyVerses.net