By Death We Live

I had a bed of asters last summer, that reached clear across my garden in the country. Oh, how gaily they bloomed. They were planted late. On the sides were yet fresh blossoming flowers, while the tops had gone to seed. Early frosts came, and I found one day that that long line of radiant beauty was seared, and I said, “Ah! the season is too much for them; they have perished”; and I bade them farewell.

I disliked to go and look at the bed, it looked so like a graveyard of flowers. But, four or five weeks ago one of my men called my attention to the fact that along the whole line of that bed there were asters coming up in the greatest abundance; and I looked, and behold, for every plant that I thought the winter had destroyed there were fifty plants that it had planted. What did those frosts and surly winds do?

They caught my flowers, they slew them, they cast them to the ground, they trod with snowy feet upon them, and they said, leaving their work, “This is the end of you.” And the next spring there were for every root, fifty witnesses to rise up and say, “By death we live.”

And as it is in the floral tribe, so it is in God’s kingdom. By death came everlasting life. By crucifixion and the sepulchre came the throne and the palace of the Eternal God. By overthrow came victory.

It is by being cast down and not destroyed; it is by being shaken to pieces, and the pieces torn to shreds, that men become men of might, and that one a host; whereas men that yield to the appearance of things, and go with the world, have their quick blossoming, their momentary prosperity and then their end, which is an end forever.
–Beecher

“Measure thy life by loss and not by gain,
Not by the wine drunk, but by the wine poured forth.
For love’s strength standeth in love’s sacrifice,
And he who suffers most has most to give.” 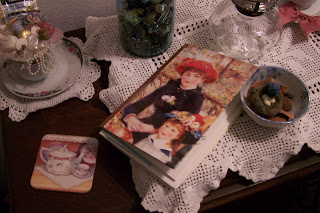 As I mentioned last weekend, some of my blogging friends have started a “Random Journal Day” (see the Random Journal Day Link Up) on the weekends, where we are encouraged to pick an entry from a previous journal at random and share it with you…so I looked back through one of my old journals and happened upon a writing that is appropriate for today, Easter. This was originally written on May 3, 2001, but it is still and always will be a message for today.  So here goes:

Thursday, May 3, 2001, 6:55 a.m.
“I am sitting on my back porch, watching the sun rise.  It is magnificent in it’s glory and beauty.  At first I thought the clouds were going to overshadow it, but not so!
Light has conquered darkness…the sun has risen!
Today’s reading in Psalms was Psalm 19:1-6~

‘The heavens declare the glory of God; and the firmament shows His handiwork.
Day unto day utters speech, and night unto night reveals knowledge.
There is no speech nor language where their voice is not heard.
Their line has gone out through all the earth,
and their words to the end of the world.
In them He has set a tabernacle for the sun,
which is like a bridegroom coming out of his chamber,
and rejoices like a strong man to run its race.
Its rising is from one end of heaven,
and its circuit to the other end;
and there is nothing hidden from its heat.’Yes, the true Light, Jesus, has conquered the darkness…the SON has risen!!!
Hallelujah to the Lamb who takes away the sins of the world!Now, I must go out into the world…and be Christ’s “Greatest Sacrament”to a lost and dying world.‘Lord, give me the time and the faith to BE and DO all YOU would have me BE and DO.  Amen.’

“How do you know what your life will be like tomorrow? Your life is like the morning fog — it’s here a little while, then it’s gone.” James 4:14 (NLT)

Before the plane backed away from the gate, the flight attendant warned us: “It’s been a rough day in the air. Prepare yourself for tremendous turbulence.” Although I wanted to make a mad dash for the door, I simply tightened my seat belt and prayed for safety. Soon, her verbal warning became a reality.

The plane rocked back and forth, as if it were slamming into walls instead of fluffy clouds. It was a short, but difficult, flight and after several attempts at landing, we were diverted to another airport, adding hours to the trip.

During this extra time in the air, I did a lot of thinking about what was most important in my life. I didn’t really believe we would crash, but I couldn’t keep from wondering … What if the worst happens? What if I don’t get any more tomorrows?

I thought about my loved ones. What were my last words to them? Were they kind or harsh? Were they filled with love, or merely instructions to carry out during my absence? Did I hug everyone and tell them how much they meant to me? If I didn’t make it home, had I prepared my children spiritually and emotionally to handle life, trust God and walk in faith? Had I told my husband how much I appreciated him?

Was there anyone I needed to forgive? Were there people I had been meaning to call or visit but never took the time? Had my priorities and plans been in line with God’s will? Had I sought God’s insight about everything on my to-do list? Had I done all I could to bring glory to God? Would I be ready to meet Jesus face to face?

Although my heart knew God was in control, my mind and emotions ran wild as I peered out the oval window at the dark clouds hovering all around us.

In an effort to ignore the panicked voice over the intercom, I began searching my Bible for scriptures about how God knows the number of our days. The first verse I found was today’s key verse.

In the rest of chapter 4, James reprimands the people for their self-centered living. Their self-indulgent, judgmental and prideful ways caused arguments and quarrels. They were consumed with business profits and neglected to seek God’s insight.

They focused on their personal agendas instead of what actually mattered. They acted as if God didn’t exist, or didn’t matter, and pursued their own plans. They disregarded God’s control over their lives and the number of their days.

James then wrote these words that spoke truth into my heart, “How do you know what your life will be like tomorrow? Your life is like the morning fog — it’s here a little while, then it’s gone” (James 4:14).

That passage could have been written to me. Sometimes I focus on my own plans, ignoring that only God knows how long He will allow me to carry them out. Other times, I make plans without seeking God’s will and get distracted by lesser things, instead of what really matters.

James wanted his readers to remember God directs us to live with a holy perspective, knowing every breath we take is one more gift from God. We aren’t promised any tomorrows, so we need to live today with an eternal perspective.

I remained calm in the midst of the airborne chaos, but that time of reflection in the bumpy skies served as a great reminder not to take time for granted. I don’t want to assume I’ll always have another tomorrow, or another chance to love on those I love the most. From now on, I want to include God in my plans and serve Him as best I can.

Lord, forgive me for focusing on my own plans or neglecting to seek Your insight. Help me to never put off until tomorrow what You want me to do today. In Jesus’ Name, Amen.

For God so loved the world that he gave his one and only Son, that whoever believes in him shall not perish but have eternal life.
John 3:16
DailyVerses.net

For in the gospel the righteousness of God is revealed—a righteousness that is by faith from first to last, just as it is written: “The righteous will live by faith.”
Romans 1:17
DailyVerses.net