Do I Hear Guilt? 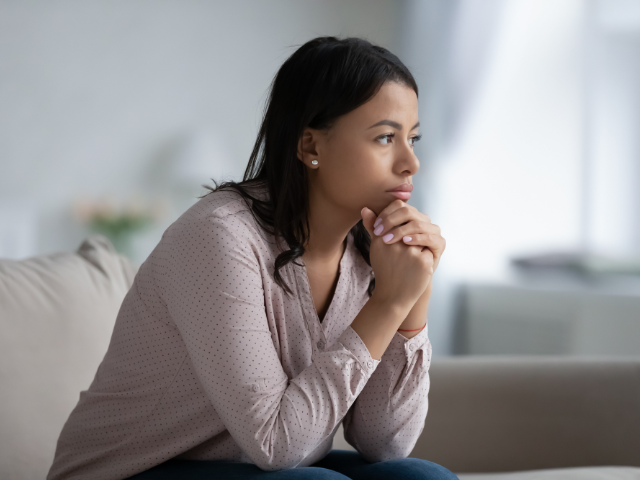 “Guilt!?! Do I hear guilt?” My friend could easily make me laugh. Even though I laughed every time she asked, her question awakened me to the fact that I’d chosen to shoulder guilt rather than let it go.

Guilt feels to me like a heavy, dark secret that others should never see. Yet, something as simple as making a minor blunder with a choice of words or a course of action can send me spiraling down into guilt. Often, it’s twin, shame, would come along for the ride. It could be nothing deep and dark to anyone, except to me! Still the guilt and shame dogged me.

I confided in my friend about everything. She knew things about me that only she and God knew. For years she would ask, “Guilt, do I hear guilt?”  Then she would follow with a second question, “Jesus died for that, so why are you carrying it?”

Great question. Why was it so easy to slip into the darkness where my less-than-stellar life events were tucked away? The place where when things went wrong, I believed I deserved it – I knew those secrets.  Sometimes it was as simple as, “I should have said this instead of that.” Or “Why did I do that?” Or “When will I learn to think through things instead of embarrassing myself?”  You know the questions.

When she moved across the country, I found the person asking those questions was ME! The answers were invariably, “Yes, I DO hear guilt.” and “Yes, Jesus DID die for that.” So, how do I get out from under that burden? I know. I know… repent! (Hearing that very word – REPENT – carried more guilt!)

In chapel one day, I heard a simple teaching that changed everything. When the teacher started talking about ‘repentance’ I had this sinking feeling, “Oh no. That’s all I need, one more message to make me feel worse about myself.”

But it didn’t go that way. He wasn’t preachy or condemning. He simply stated the fact that repent is made up of two Greek words, ‘meta’, meaning change, and ‘noeō’ meaning the mind. It means to change your mind! What a revelation! Think differently.

I had work to do. I had to learn that when I repented, God heard me and forgave me. That’s where I had to change my mind. It is finished! Once I go to Him and say, “Please forgive me”, it is done. That change of mind has carried me a long way.

As I learn to think differently, I am enjoying a new element of freedom I never imagined. Paul had it right when he said,

Go ahead and read all of Romans 8.  Boy-oh-boy! Talk about freedom.

Take Him at His Word, dark places are illuminated with His Life. He has brought us to this point of joy and liberty to empower us to be who we want to be in Him. Better yet, He’s setting us up to live our lives as He designed us from the foundation of the world.

Even as [in His love] He chose us [actually picked us out for Himself as His own] in Christ before the foundation of the world, that we should be holy (consecrated and set apart for Him) and blameless in His sight, even above reproach, before Him in love (Ephesians 1:4).

We live in a guilt-free zone! Thanks to Jesus!

Psalms 19:1-3 1The heavens declare the glory of God; the skies proclaim the work of his hands. 2Day after day they pour forth speech; night after night they display knowledge. 3There is no speech or language where their voice is not heard.

David looked up at the night sky and saw a declaration of the glory of God. With the Hubble we can see even more wondrous and amazing sights far beyond the range of David’s eyes. But we have a different response. We have the audacity to think we have figured out God. Even macro-physicists include God in their equations. The more we discover the less we realize we know. Today you will find most astronomers believing there must be a God. One astronomer wrote that to find an argument against the existence of God, he had to go to another department. Yet the average person on the street has the impression that astronomers have creation all figured out as a natural process. Let’s hope that more astronomers will speak up about their lack of understanding of all that they see so that our perceptions will be corrected.

One of the sad byproducts of city life is that the stars can barely be seen. Our skies are so polluted that we have hidden the declaration. To replace that effect, we have the pictures from the Hubble continuing to come in as it shoots picture after picture of wonders full of color, design, and phenomena that cause us to marvel. It doesn’t need to be translated into French or Russian. It speaks in every language. It displays the knowledge of an infinite Creator who makes laws, order, and design. When you see those pictures, listen to God.

Consider: The heavens are still declaring the glory of God. Are you listening?

Streams in the Desert – September 28

There is a vast difference between happiness and blessedness. Paul had imprisonments and pains, sacrifice and suffering up to the very limit; but in the midst of it all, he was blessed. All the beatitudes came into his heart and life in the midst of those very conditions.

Paganini, the great violinist, came out before his audience one day and made the discovery just as they ended their applause that there was something wrong with his violin. He looked at it a second and then saw that it was not his famous and valuable one. He felt paralyzed for a moment, then turned to his audience and told them there had been some mistake and he did not have his own violin. He stepped back behind the curtain thinking that it was still where he had left it, but discovered that some one had stolen his and left that old second-hand one in its place.

He remained back of the curtain a moment, then came out before his audience and said, “Ladies and Gentlemen: I will show you that the music is not in the instrument, but in the soul.” And he played as he had never played before; and out of that second-hand instrument, the music poured forth until the audience was enraptured with enthusiasm and the applause almost lifted the ceiling of the building, because the man had revealed to them that music was not in the machine but in his own soul.

It is your mission, tested and tried one, to walk out on the stage of this world and reveal to all earth and Heaven that the music is not in conditions, not in the things, not in externals, but the music of life is in your own soul.

‘Do all things without murmurings and disputings: that ye may be blameless and harmless, the sons of God, without rebuke, in the midst of a crooked and perverse nation, among whom ye shine as lights in the world; holding forth the word of life; that I may rejoice in the day of Christ, that I have not run in vain, neither laboured in vain.’ Philippians 2:14–16

Christians are soldiers. If our soldiers were to take it into their heads that they never ought to be seen, a pretty pass things would come to; what were the soldiers worth when they shunned parade and dreaded battle? We want not men who dare not show themselves to friend or foe. Christians are runners too, and what sort of runners are men who run in the dark? Not so says the apostle; we are ‘compassed about with so great a cloud of witnesses,’ and therefore he bids us ‘lay aside every weight, and the sin which doth so easily beset us.’ What! a running match and no spectators? Hail Emperor! The champion salutes thee! He prays thee to dismiss the spectators. You common herd, retire, or put your fingers to your eyes, here comes a runner who is so dainty that he cannot be looked at, a swift-footed runner who must be scrutinised by no vulgar eye or he will faint and lose the crown. ‘Ha! Ha!’ the mob laughs. ‘These are not the men to make a Roman holiday; these timid fools had better play with babes in the nursery; they are not fit to consort with men.’ What think you of Christians who must have the stadium cleared before they can enter the course. Rather, O sons of God, defy all onlookers. Crowd the seats and look on, angels, and men, and devils too, and see what you will. What matters it to the Christian, for he is looking unto Jesus, he runs not for you but for the reward, and whether you look or not, his zeal and earnestness are still the same, for Christ is in him and run he must, look on who will.

For meditation: How can others see our good works and glorify our Father who is in heaven, if we are ashamed to let our lights shine before them (Matthew 5:16)?