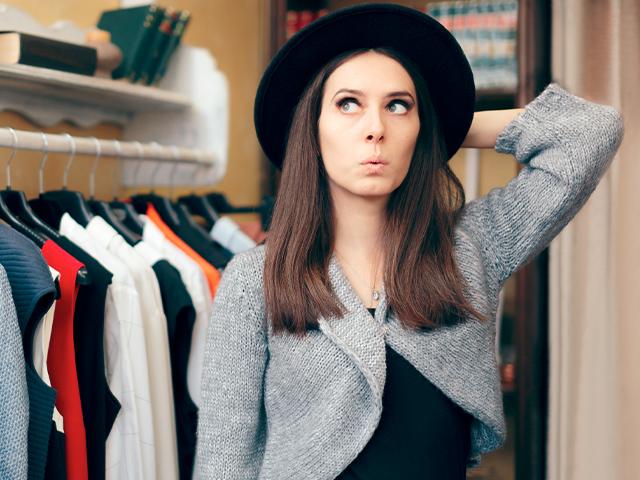 One of the positives that hopefully came out of the 2020 quarantine is that we finally had no excuse for not tackling those little projects around the house we’d been putting off. One of mine was my closet. To paint a good picture for you, it wasn’t a total mess. Quite the opposite really— my closet was neat and organized. The problem was that I wasn’t happy with most of my clothes. Every morning I’d go from one hangar to the next, skipping over item after item that I knew didn’t fit right until I found something to wear.

One afternoon, I told my husband, “Don’t come into our room. I’m going to be in there awhile.” And I intentionally tried on EVERY SINGLE piece of clothing I owned. I gave each item a two-step test: first, I tried it on without looking in a mirror and if I felt comfortable in it, then (and only then) I would look and see if I liked the style on me. If it passed both those tests (in that order), then I hung it back up in my closet. If not, in the give-away pile it went! By the end of my afternoon, well over sixty percent of my closet was in a pile— but I was happy!

It felt good to go into my closet and know that every item was something I could feel comfortable and stylish in (not to mention, it felt good to make a large donation to a local thrift store).

But what about our spiritual clothing? Did you know the Bible says you have one garment that is more important than anything else you could ever put on? That single item is LOVE.

It’s true we wear many hats. But unfortunately, like my overly full and somewhat useless closet, we hold on to things way too long. We’ve grown, things don’t fit, or we’ve matured out of something that we were once comfortable wearing around.

Paul said it this way:

“Don’t lie to one another. You’re done with that old life. It’s like a filthy set of ill-fitting clothes you’ve stripped off and put in the fire. Now you’re dressed in a new wardrobe. Every item of your new way of life is custom-made by the Creator, with his label on it. All the old fashions are now obsolete. Words like Jewish and non-Jewish, religious and irreligious, insider and outsider, uncivilized and uncouth, slave and free, mean nothing. From now on everyone is defined by Christ, everyone is included in Christ” (Colossians 3:9-11, Message).

God has given us a new wardrobe. And let’s be honest, who isn’t thrilled to get a new outfit? (Guys included!) There’s just something fun and comforting about a new sweatshirt, pajamas, shoes, or something a little dressier. In other words, it feels good to feel good. And God knows this.

“So, chosen by God for this new life of love, dress in the wardrobe God picked out for you: compassion, kindness, humility, quiet strength, discipline. Be even-tempered, content with second place, quick to forgive an offense. Forgive as quickly and completely as the Master forgave you. And regardless of what else you put on, wear love. It’s your basic, all-purpose garment. Never be without it” (Colossians 3:12-14, Message).

February is a month when LOVE is highlighted more than any other time of the year, but God is love and unlike that favorite wool sweater or golf shirt you might only pull out in certain seasons, He wants you to wear His love all the time. “It’s your basic, all-purpose garment.”

Love always feels good when you put it on. And love is always fashionable— it will never go out of style. Of all the things you could wear around every day, make sure love is your go-to item.

“The steadfast love of the LORD never ceases; his mercies never come to an end; they are new every morning; great is your faithfulness.” Lamentations 3:22-23 (ESV) 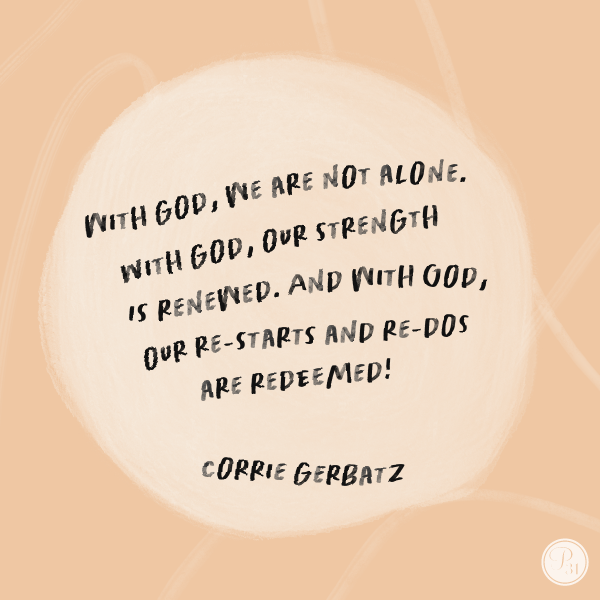 I stood beside the festively decorated table as I balanced my fancy, shiny plate, which was much too small for my tower of finger foods and sweets. Another holiday gathering.

The topic of the hour was the new year to come and the goals people hoped to follow through with this time. I listened politely (and munched continually) as talk of workout routines, detox specials and “life-changing” reads were discussed and debated at length. People were either cutting something out — foods, behaviors, social media, toxic relationships — or adding something in — more gratefulness, more nature, more downtime, more kindness.

But regardless of where they fell on that spectrum, everyone was waiting until the new year to start fresh. And it made sense. A do-over sounded good, especially after the year of uncertainty and upheaval we’d all just struggled through.

Later that night, I lay in bed obsessing about my own grand plans for the new year. Was I going to cut things out or add things in? My head could obviously do with less self-criticism, my waistband perhaps less sugar and my nights less Netflix. But also, it couldn’t hurt to bolster my heart with a little more thankfulness, patience and a lot more prayer!

Before long, my grand list of to-dos for the “new me” was not feeling so grand, and instead, I felt as overburdened as my shiny snack plate — ready to crack under the mounting pressure. No wonder most New Year’s resolutions failed in the first month! It was all too much! I dramatically fluffed my pillow and was ready to continue my aimless tossing and turning when a forgotten truth burst through my grumbling tangle of thoughts:

But His mercies are new every morning.

My body instantly stilled. Did I hear that right? I waited two breaths more before scrambling to grab my Bible and search for the words which hung heavy in the air.

“The steadfast love of the LORD never ceases; his mercies never come to an end; they are new every morning; great is your faithfulness” (Lamentations 3:22-23).

There it was before me. Words of hope to cling to! Words which were first proclaimed over God’s people when they were desperately in need of their own restart.

They had gone astray in a big way — cutting out a lot of good, adding in a lot of bad — and they were reaping the heartbreaking consequences. But even then, the Lord’s compassion was ever present. Even then, He offered His mercy. Why? Because they were His people! They belonged to Him … just as I belong to Him.

My heart exhaled in relief. I didn’t need to wait for the start of a new year, a new season or even a new week to pursue a fresh start. And I definitely didn’t need to quit in shame if (and when) my fresh start needed another restart … and another … and seven more for good measure. I belong to the Lord! He is my fresh start every morning, and His mercies are never-ending.

The same is true for you!

Friends, when we belong to the Lord, we are given the grace-filled privilege to seek His mercy at any time. (Hebrews 4:16) There are no strings attached. Our heavenly Father simply invites us to begin again … with Him. And with Him is what makes all the difference in the world!

With Him, we are not alone.
With Him, our strength is renewed.
And with Him, our restarts and redoes are redeemed!

So whether we find ourselves needing to add in more of the good stuff — humility, gratefulness, self-control, tolerance, forgiveness — or cut out the bad — addiction, shame, guilt, greed, envy, bitterness — with Him, we can feel hopeful for this new year because our gracious and merciful Lord is sovereign over it all.

“For who maketh thee to differ from another?” 1 Corinthians 4:7

If thou leave me, Lord, for a moment, I am utterly undone.

“Leave, ah! leave me not alone, Still support and comfort me.”

Let Abraham be deserted by his God, he equivocates and denies his wife. Let Noah be deserted, he becomes a drunkard, and is naked to his shame. Let Lot be left awhile, and, filled with wine, he revels in incestuous embraces, and the fruit of his body becomes a testimony to his disgrace. Nay, let David, the man after God’s own heart, be left, and Uriah’s wife shall soon show the world that the man after God’s own heart still has an evil heart of unbelief in departing from the living God. Oh! the poet puts it well –

“Methinks I hear my Saviour say, ‘Wilt thou forsake me too?’”

And now let our conscience answer:-

“Ah, Lord! with such a heart as mine,
Unless thou hold me fast,
I feel I must, I shall decline,
And prove like them at last.”

Oh be not rashly self-confident, Christian man. Be as confident as you can in your God, but be distrustful of yourself. You may yet become all that is vile and vicious, unless sovereign grace prevent and keep you to the end. But remember if you have been preserved, the crown of your keeping belongs to the Shepherd of Israel, and you know who that is. For he has said “I the Lord do keep it; I will water it every moment: lest any hurt it, I will keep it night and day.” You know “who is able to keep you from falling, and to present you faultless before the presence of his glory with exceeding joy.” Then give all glory to the King immortal, invisible, the only wise God your Saviour, who has kept you thus.

For meditation: Those who think they can stand by themselves are taught by being allowed to fall by themselves (1 Corinthians 10:12; Ecclesiastes 4:10).

“I know a man in Christ who fourteen years ago – whether in the body … or out of the body I do not know … [who] heard inexpressible words, which a man is not permitted to speak.” – 2 Corinthians 12:2-4 NASB

Paul described how an unnamed man (whom many believe was Paul himself) was “caught up to the third heaven” (v. 2). This must have been amazing!

Paul’s account is filled with mystery. He did not know how this had happened, or if the man was in or out of his body. He could not describe what Heaven was like. What he saw was “inexpressible” and could not be repeated.

Certainly Paul realized that Heaven is a place of the extraordinary, the indescribable, and the overwhelming. Pondering this experience, he realized how often people boast about themselves or their abilities. But after seeing Heaven, he became keenly aware of his own limitations versus God’s greatness.

Paul realized that no one could boast about anything except our own weaknesses. Everything we have is a gift from God. We owe everything to Him.

Let this glimpse of Heaven encourage you! Remember, Jesus said He was going to “prepare a place for you.” He “will come again and receive you to Myself, that where I am, there you may be also” (John 14:1-3).

If Jesus is your Lord, you will spend eternity with Him. You will see that indescribable place and hear those inexpressible words.

You can prepare for that glorious day right now. Humble yourself before God. Seek Him. Worship Him. Don’t boast in yourself, but rather dedicate your life to serving Him.

Do you not know? Have you not heard? The Lord is the everlasting God, the Creator of the ends of the earth. He will not grow tired or weary, and his understanding no one can fathom.
Isaiah 40:28
DailyVerses.net