Battle Wounds from the Good Fight 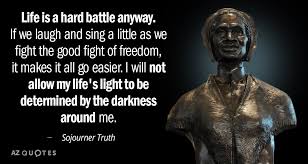 “How much can you know about yourself if you’ve never been in a fight? I don’t wanna die without any scars …” – Chuck Palahniuk, author of Fight Club

I was thinking this morning about what it means to be in a fight. As a woman, it’s not quite the rite of passage as it is for a man. However, I fought enough with my brothers as a child that I’m aware of the mechanics of it.

Most people agree that a fight that’s one-sided isn’t really a fight. That’s just a beating. That’s a bully taking advantage of someone weaker than he or she is. A real fight is back and forth; you trade blows.

The keeping of one’s faith is similar. If you want to be a Christian or even remotely God-conscious, this life will fight you for it. It’s going to hit you, and as noted in the last Rocky movie, nobody hits harder than life. The world tries to take your joy and your peace with every unwanted circumstance, every unexpected tragedy, and every unforeseen pitfall.

So what do you do? You can curl up in the fetal position, block your face and just take it. Truthfully, there are times when that’s the only thing you can do. Some hardships are simply tests of endurance.

You can help the enemy by inflicting wounds on yourself. That’s when you just agree with every negative thought that comes in: “I’m not good enough, not smart enough, etc.” Your opponent doesn’t have to do anything then. You will beat yourself up.

Then there’s the third option: you can fight. You fight by remembering God’s promise that no weapon formed against you will succeed at taking you down (Isaiah 54:17). You hide His words in your heart and wear them out on your sleeve. You stand up against the lies that seek to sink your ship.

And it’s going to be rough. You’ll get wounded. You’ll get dazed. The enemy doesn’t fight fair, and he’s very aware of your weak points. Don’t think for a moment that he won’t sucker punch you right where it hurts.

It’s difficult to imagine emerging from any fight without scars. Even Jesus has scars. He showed them to the disciples after His resurrection (Luke 24:39). In fact, His scars were proof that He had died and came back to life. I think our scars bare the same resemblance. They are the evidence that we are overcomers. They qualify us to speak to those in pain and say, “I’ve been there.”

So, keep your head up. You’ll lose a few battles, but remember that you’ve already won the war.

Fight the good fight of the faith. Take hold of the eternal life to which you were called when you made your good confession in the presence of many witnesses. (1 Timothy 6:12 NIV)

Hannah was barren and her husband’s other wife tormented her because of it. In those days to be barren was to appear to be cursed of God. As she was pouring out her heart to God in anguish at the tabernacle, the priest Eli thought she was drunk. He rebuked her for it but then heard her explanation. He asked the LORD to grant her request. She promised to give the child back to the LORD. She named her child Samuel. After she gave birth, she sang the prayer in 1 Samuel 2. That prayer includes the verse for today.

We can know that even though we are mortal and of little account, the Creator hears our prayer when we pour out our hearts to Him. Hannah did not have to have children to have a meaningful life, but she thought she did. God heard the pain of her heart. What an awesome God we serve. He owes us nothing, and we owe Him all, yet He hears our prayer and is concerned with our pain.

Hannah declared God to be uniquely holy. That is very true. He is the standard of holiness. We can be credited with the righteousness of Christ and be made holy in God’s eyes, yet He is uniquely holy. Our holiness is received, whereas His is inherent. He has always been holy throughout time. We became holy at a point in time.

He is always the same, and so, He is our Rock. No other god concerns himself with man in love and mercy like our God. No other god is forever perfect like our God. The answer to Hannah’s prayer filled her with an awareness of the wonderful God she served.

Consider: The answers to our prayers should fill us with wonder too.

The fire did not arrest their motion; they walked in the midst of it. It was one of the streets through which they moved to their destiny. The comfort of Christ‘s revelation is not that it teaches emancipation from sorrow, but emancipation through sorrow.

O my God, teach me, when the shadows have gathered, that I am only in a tunnel. It is enough for me to know that it will be all right some day.

They tell me that I shall stand upon the peaks of Olivet, the heights of resurrection glory. But I want more, O my Father; I want Calvary to lead up to it. I want to know that the shadows of this world are the shades of an avenue the avenue to the house of my Father. Tell me I am only forced to climb because Thy house is on the hill! I shall receive no hurt from sorrow if I shall walk in the midst of the fire.
–George Matheson

‘The road is too rough,’ I said; ‘It is uphill all the way;
No flowers, but thorns instead;
And the skies over head are grey.’
But One took my hand at the entrance dim,
And sweet is the road that I walk with Him.

“The cross is too great,’ I cried–
‘More than the back can bear,
So rough and heavy and wide,
And nobody by to care.’
And One stooped softly and touched my hand:
‘I know. I care. And I understand.’

“Then why do we fret and sigh;
Cross-bearers all we go:
But the road ends by-and-by
In the dearest place we know,
And every step in the journey we
May take in the Lord’s own company.

“Be careful to obey all these things I command you, so that you and your children after you may prosper forever, because you will be doing what is good and right in the sight of the LORD your God.” – Deuteronomy 12:28 CSB

The Bible makes an amazing promise: God wants us to “prosper forever.” God guaranteed this benefit to His people. But they had a role to play. The key to fulfillment was obedience. This meant not following the lifestyle of the peoples living in the land, but rather keeping His commands. The amazing thing is that this promise still is true for us today! God still promises to prosper us if we will keep His commands and if we do things His way.

Many people in our modern world reject this attitude. In fact, according to a recent survey, millions of Americans believe that the Bible is just a book of fables! Many people do not take the Bible seriously. But sadly, this means missing God’s abundant blessings!

In your life, think about what influences your decisions. Are you trusting in ideas that seem popular in the world? Or are you living according to God’s principles?

Today, remember that God’s timeless promises still are true for you. He still desires to bless and prosper you. Instead of being dominated by the pop-culture philosophies, fill your mind with His Word. Pray and build a more intimate relationship with Him. Seek to do things His way.

Remember, the Bible’s promise that God desires to bless you abundantly. Cooperate with Him. Serve Him with enthusiasm! Believe Him! Trust Him for true joy, freedom, and prosperity!

Sin is not ended by multiplying words, but the prudent hold their tongues.
Proverbs 10:19
DailyVerses.net