God Goes Where You Go

Have I not commanded you? Be strong and courageous. Do not be afraid; do not be discouraged, for the LORD your God will be with you wherever you go. Joshua 1:9 NIV

How comforting it is to know that wherever we go, God is there with us. Sometimes we find ourselves in situations and wonder if God is paying attention. We may feel so alone and even depressed. We can’t feel God’s presence, and we need His guidance and help.

Sometimes friends, spouses, and parents don’t really understand what we are going through. But God does and He cares. God told Joshua to be strong and to have courage. Then He told him a wonderful truth: “The Lord your God will be with you wherever you go.” Yes, that’s right… wherever! We don’t have to feel all alone. God is with us. He is working out the problems, and we don’t even realize it.

But now … the Lord who created you … says: “Do not be afraid, for I have ransomed you. I have called you by name; you are mine. When you go through deep waters, I will be with you. When you go through rivers of difficulty, you will not drown. When you walk through the fire of oppression, you will not be burned up; the flames will not consume you. For I am the LORD, your God, the Holy One of Israel, your Savior. From eternity to eternity I am God. No one can snatch anyone out of my hand. No one can undo what I have done. Isaiah 43:1-3, 13 NLT

God is with us, leading us, guiding us, loving us, providing for us — all with His unlimited resources. What do we need? Do we need strength, peace, love, joy, or hope? He has it all. He is longing to pour out His favor and blessing upon us. We need to be open to Him and to trust Him. We need, by faith, to receive what He has for us. It is essential we realize how much He loves us and that He has a good purpose and plan for us.

When I think of all this, I fall to my knees and pray to the Father, the Creator of everything in heaven and on earth. I pray that from his glorious, unlimited resources he will empower you with inner strength through his Spirit. Ephesians 3:14-16 NLT

This Scripture is awesome. There is nothing that God doesn’t know and can’t do for us. He walks with us every moment of every day. We need to speak these Scriptures to our hearts. The devil can’t stand it when we, in confidence, speak God’s Word. It builds faith in us and gives us the strength to stand.

O Lord, you have examined my heart and know everything about me. You know when I sit down or stand up. You know my thoughts even when I’m far away. You see me when I travel and when I rest at home. You know everything I do. You know what I am going to say even before I say it, Lord. You go before me and follow me. You place your hand of blessing on my head. Such knowledge is too wonderful for me, too great for me to understand! Psalms 139:1-6 NLT

Show me the right path, O LORD; point out the road for me to follow. Lead me by your truth and teach me, for you are the God who saves me. All day long I put my hope in you. Psalms 25:4-5 NLT

You can trust God. No matter what is going on in your life, He is there! God goes where you go.

So do not throw away this confident trust in the Lord. Remember the great reward it brings you! Patient endurance is what you need now, so that you will continue to do God’s will. Then you will receive all that he has promised. Hebrews 10:35-36 NLT

When You Can’t See the Road Ahead

“And Jesus said to him, ‘Go, for your faith has healed you.’ Instantly the man could see, and he followed Jesus down the road.” Mark 10:52 (NLT) 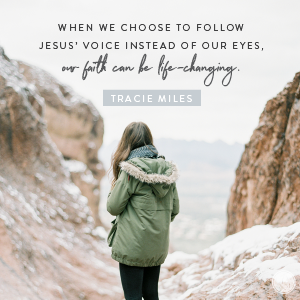 I’m not much of a Monday person, but this particular Monday morning, I found myself disliking that dreaded day even more than usual.

Shortly after waking up from a restless night’s sleep, my thoughts drifted toward what the upcoming week might hold. I felt a sense of dread sink into my heart and soon found myself wishing it were already Friday.

Most people long for Friday because it means the beginning of the weekend; however I knew that if the week were over, I would no longer have to worry about what challenges it might bring. If it were Friday, I would already have encountered them, faced them and made some progress in dealing with them.

Yet, the fact remained: It was only Monday.

As anxiety set in, God pricked my heart, reminding me I could either let my anxious thoughts control me throughout the week, or I could choose to be in control of them instead. I could worry myself into a frenzy or ask for His peace to fill my heart. I was blind to what was ahead, but knew God had a crystal-clear view.

In Mark chapter 10, a blind man named Bartimaeus sat beside the road — as he normally did — when he heard a commotion. He soon discovered the large crowd of people following Jesus. And they were all headed his way.

Bartimaeus had no idea what was going to happen. Having no sight, he could have felt threatened and anxious, fearful the crowd might trample him. He could have been concerned he’d be unnoticed and overlooked, yet again. Instead, he focused on what he could see with his heart rather than what he was unable to see with his eyes.

When the people yelled at him to be quiet, he refused and continued to shout, saying, “Son of David, have mercy on me!” (Mark 10: 48b)

Jesus stood still, and asked someone to bring the blind man to him. The Bible says Bartimaeus threw aside his coat, jumped up and headed straight toward Jesus. (Mark 10:50)

I love that. The blind man threw aside anything that might hinder his running, jumped up all on his own and blindly ran to Jesus.

He ran solely ahead by faith, not by sight — unafraid of falling or bumping into things, nor fearing what might be ahead of him, simply because He heard Jesus’ voice and knew He was there.

Bartimaeus’ eyes caused him to live without sight, but his heart allowed him to live by faith. That small act of blind faith changed his life forever.

As I lay in my bed pondering this sweet story God brought to mind, my heart began to calm. My inability to “see” the upcoming week did not have to hinder my ability to run forward in faith. I could follow Jesus’ voice in blind faith too, if I chose to believe He would watch over my every step, much like He did for the blind man.

I prayed for the strength to live by faith even when I couldn’t see what was ahead. I committed to trust Jesus with all the things He could see coming but I could not.

Streams in the Desert – October 29

He shall sit as a refiner and purifier of silver (Malachi 3:3).

Our Father, who seeks to perfect His saints in holiness, knows the value of the refiner’s fire. It is with the most precious metals that the assayer takes the most pains, and subjects them to the hot fire, because such fires melt the metal, and only the molten mass releases its alloy or takes perfectly its new form in the mould.

The old refiner never leaves his crucible, but sits down by it, lest there should be one excessive degree of heat to mar the metal. But as soon as he skims from the surface the last of the dross, and sees his own face reflected, he puts out the fire.
–Arthur T. Pierson

He sat by a fire of seven-fold heat,
As He watched by the precious ore,
And closer He bent with a searching gaze
As He heated it more and more.
He knew He had ore that could stand the test,
And He wanted the finest gold
To mould as a crown for the King to wear,
Set with gems with a price untold.
So He laid our gold in the burning fire,
Tho’ we fain would have said Him ‘Nay,’
And He watched the dross that we had not seen,
And it melted and passed away.
And the gold grew brighter and yet more bright,
But our eyes were so dim with tears,
We saw but the fire–not the Master’s hand,
And questioned with anxious fears.
Yet our gold shone out with a richer glow,
As it mirrored a Form above,
That bent o’er the fire, tho’ unseen by us,
With a look of ineffable love.
Can we think that it pleases His loving heart
To cause us a moment’s pain?
Ah, no! but He saw through the present cross
The bliss of eternal gain.
So He waited there with a watchful eye,
With a love that is strong and sure,
And His gold did not suffer a bit more heat,
Than was needed to make it pure.

Let us then approach God’s throne of grace with confidence, so that we may receive mercy and find grace to help us in our time of need.
Hebrews 4:16
DailyVerses.net