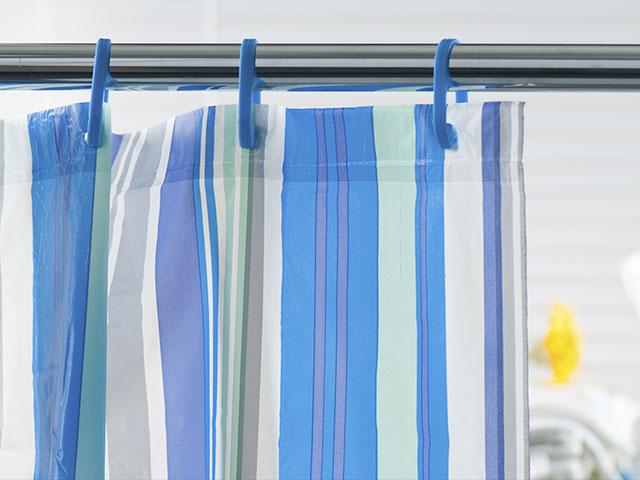 My neighbor, Edna, found a stray kitten on her porch a few months ago. She already had three grown cats, all of which hated the kitten, so she called me and asked me to take him. I love cats, but hadn’t had one in several years and didn’t think I wanted another one. However, when I heard his baby meow over the phone line, my heart melted.

I don’t know where he had been before Edna’s, but he came to me full of insecurity. He keeps looking for places to hunker down where he can feel secure. One of his favorites is under the shower curtain. I have a curved shower rod and when not in use, the curtain hangs outside the tub, bowing out in the center with the hem dangling a few inches above the floor.

The kitten, Theodore, crouches under the center section. The funny thing is the shower curtain only covers his ears and eyes, leaving his whole body exposed and his whiskers poking out. But he feels safe under the flimsy fabric.

I am reminded of how we can be like Theodore. We look for security in flimsy things, too. My husband and I, seriously concerned about providing enough money for our retirement, invested in the stock market. Having money socked away makes us feel better about the future. But markets have a history of softening, declining and bursting like a bubble. We really don’t know how much money we will end up with.

Some people collect things, even when they can’t afford to. I am reminded of the commercial in which a man who has a huge, fake smile plastered on his face lists all the possessions he owns. At the end he says, still smiling, “Can’t somebody help me? I’m in debt up to my eyeballs.” Surrounding ourselves with a lot of things may feel good for a while, but even if we can afford them, we can’t take them with us when our life is over. We’re simply covering our eyes and ears to the truth that they can’t provide the kind of security that lasts.

A job seems like the answer for many. They spend years training and preparing for their dream job – the one that will make them rich and famous. Someone said fame is fleeting. They were right and jobs can be, too, in our world of layoffs, outsourcing and corporate corruption.

Some search for security in relationships. My mother felt secure in her marriage until it fell apart after 33 years. Marriage is great, and we should feel secure in our marriage relationships, but we are not guaranteed tomorrow. My husband and I have been married almost 29 years and if there ever was a solid marriage we have it, but our health is not promised to last forever. One of us will probably pass away before the other. If marriage were the only thing lending me a sense of security, I might one day be lost without it.

Some people live in war-torn countries and believe if they only had peace, they would feel secure. Unfortunately, military peace doesn’t always bring personal security.

In the parable of Matthew 7:24-27 Jesus said if we build our houses on the sand, then when the rain comes, everything will be washed away. But if we’ve built on the rock, our house will hold up against the worst of storms. Jesus is the rock and the house is our life. Whatever plans we make for our future need to be prayed over and Spirit led. When we hunker down on Jesus our Rock, we really are secure. Anywhere else is behind a flimsy shower curtain.

Once the tabernacle was set up according to the instructions Moses received on the mountain, the cloud that had been leading them settled upon it. The glory of the LORD so filled the Tent of Meeting that he could not enter.

Today the tent of meeting is your spirit. God desires to so fill you that your life is overflowing with Him, and little room is left for self to enter in. That is complete Christ likeness. He is taking us all to that place, individually and corporately. One day the work will be done and everything in place, and the glory of the LORD will completely fill us, the tabernacles, and the Tabernacle. He has always been in the process of making a dwelling place for Himself.

The day of completion is the wedding feast of the Lamb. When we see Him we will be like Him, for we shall see Him as He is (1 John 3:1-2). When we are like Him, He can fill us completely. We have a deposit now, a deposit of the Holy Spirit (Ephesians 1:13-14). That is deposit of what will someday be in all His fullness. We experience it more and more as we grow in Him.

“Heaven is my throne and earth is my footstool; what house will you build me?” says the Lord, “and what shall be the place of my rest?” (Acts 7:49)” Upon this rock I will build my church…” (Matthew 16:18) They that believe have entered into rest (Hebrews 4:3a).

Meditation: I am the temple of the living God!

Starved for Faith and Vision

For me, Dave was that boss. The guy could make every triumph into misery, every completed project into a diatribe for what didn’t go right. Not chewing you out was his way of complimenting a job well done. And, no, I’m not joking. The guy would fire someone I worked with and then come to me the next day to say, “I fired your little friend.”

And yet, for some reason I never understood, Dave liked me from the beginning. He would never have said that, of course, never admitted to not hating someone. But he did. Even as a lackey intern, he put me in charge of projects way above my pay grade. Even as the newbie, he’d let me in on the big stuff we’d be working on in a few months. My position was only supposed to last 30 days, but Dave kept me there for months by making excuses to his bosses about why I should stay.

To be honest, I hated the work. Here I was an English major who was supposed to be editing and writing and changing the world through prose. But I was afraid of trying for that world-changing job. Instead, I got pushed into IT project management for hospitals, which is really just a nice way of saying that I moved computers and loaded software. Over and over.

But it’s funny what happens between a boss and a peon when you’re wearing scrubs and snatching computers from the ICU. For Dave, those moments brought clarity. In a place where alarms signal dying, he’d tell me about his one-time plans to be an architect and the reasons why it couldn’t happen. His rage would disappear with the code blues and rushing nurses. He dreamed for just a moment.

And then we’d be pushing our carts of equipment to a new wing of the hospital, and the sarcasm flooded in to cover the regret. He’d snap back to the snappiness as if the ICU never happened.

Maybe that’s why Dave liked me. He knew I didn’t want to be in those sterile halls either. He knew this detour felt more like a dead end. I was his earlier self.

When I finally quit, Dave didn’t say goodbye. In fact, he avoided me for much of my two-week notice period. His only words about me were to berate the rest of the team with how the “only competent worker” was leaving.

With him, that meant he approved.

“Moses and Aaron came and said to Pharaoh, ‘Thus says the Lord, the God of Israel, “Let My people go that they may celebrate a feast to Me in the wilderness.”’” – Exodus 5:1 NASB

When they were freed from bondage, He told them, Three times a year you shall celebrate a feast to Me” (Exodus 23:14). The Hebrew word here describes moving in a circle, observing a festival, dancing, even being giddy. This was to be a real celebration!

This emphasis demonstrates clearly that celebration is important to God. There is a time for everything, including a time to celebrate (Ecclesiastes 3:1-4). Yet it can be easy to be overwhelmed with our problems. We tend to focus on obstacles and the troubles we face and feel discouraged.

But, as God reminded the Israelites, there are times to stop and celebrate. We need to remember the miracles we have experienced, think about how God has met our needs, reflect on His promises, and praise Him instead of complaining or worrying.

Are you burdened? Weary? Worried? For a moment set these thoughts aside. Just concentrate on God. Think about His goodness! His mercy! Salvation! Healing! Wisdom! And His promises! There may be problems in your life and the world. But remember. God is on the throne! He is sovereign! And He wants you to celebrate!

For those who find me find life and receive favor from the Lord.
Proverbs 8:35
DailyVerses.net

Therefore encourage one another and build each other up, just as in fact you are doing.
1 Thessalonians 5:11
DailyVerses.net