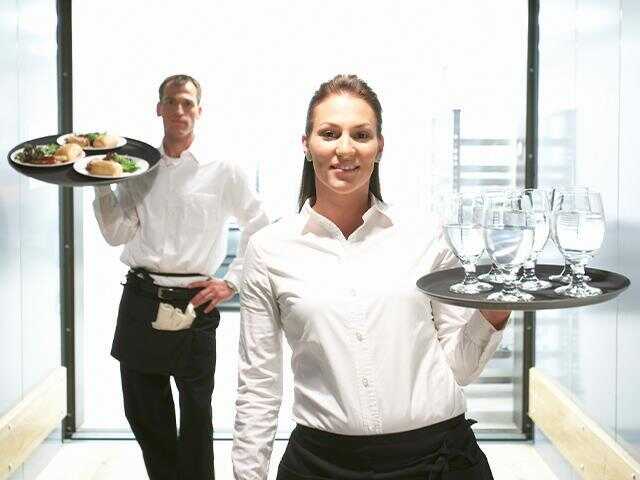 When I made my living as a waitress, I quickly learned the value of three words spoken to fellow servers: “I’m behind you.”

No one wants to turn around and cannon into a tray brimming with hot coffee, Denver omelets, and oatmeal with raisins. Fifteen Cub Scouts and their troop leader get impatient when you have to re-scoop their ice cream because you dropped the original bowls on the floor after forgetting to tell the busboy, “I’m behind you.” It’s wise to let people know of a potential mess, so you both can avoid it.

As my husband was getting a pizza out of the oven recently, I walked behind him, carrying our salad bowls. Although 35 years have passed since I served food professionally, I still said, “I’m behind you.” When those three words hit the air, they gripped my heart in a new way. I was not simply telling Kevin to “watch out;” I was helping him succeed at his task of the moment. I was supporting him. And I was saving both of us a trip to the floor to clean up tomato sauce, mozzarella, and Thousand Island dressing.

We all need support, especially in the Church, where we operate as a body, and “should have equal concern for each other” (1 Corinthians 12:25). As we serve the Lord and those around us, our individual loads become lighter when we help each other carry them.

The second-wisest man who ever lived said it this way,

“Two are better than one, because they have a good return for their labor: if either of them falls down, one can help the other up. But pity anyone who falls and has no one to help them up.” (Ecclesiastes 4:9-10, NIV)

The list of ways to get behind a brother or sister is endless:

Rebuking and finding fault rarely motivate anyone to succeed. Most of us avoid critical, sour individuals. But we enjoy the company of people who bring out the best in us, helping us believe in ourselves and our dreams. We achieve things we thought impossible by having one or two caring friends say, “I’m behind you.”

You can be that friend to someone today. Instead of turning your back on a need or mocking a dream, be wise enough to say, “I’m behind you. Let me help you succeed.”

For us fellow servers, it will make the difference between messes to clean up or miracles to celebrate.

Nehemiah 1:2-4 2Hanani, one of my brothers, came from Judah with some other men, and I questioned them about the Jewish remnant that survived the exile, and also about Jerusalem. 3They said to me, “Those who survived the exile and are back in the province are in great trouble and disgrace. The wall of Jerusalem is broken down, and its gates have been burned with fire.” 4When I heard these things, I sat down and wept. For some days I mourned and fasted and prayed before the God of heaven.

Nehemiah immediately did what Ezra had done when he heard news that the people of God were in trouble. He wept, mourned, fasted and prayed. He took the issue straight to the One who could do something about it. Great men of God have a heart for the people and know where the answer to their need is found. His prayer follows a pattern we see throughout the Word of God. First, he adores God. It helps us to remember the omnipotence of the One to whom we are praying. He confesses his sins and the sins of his ancestors. Confession reminds us of who we are and our position of not deserving the kindness God pours out on us. Then he reminds God of His word. It is not as though God needs to be reminded, but it gives us faith to ask and the confidence that we are praying according to God’s will. If you pray according to the Word of God, you know you are praying the right thing. Finally, he asks God for the favor of the king, because he is going to ask him for help in this matter.

Nehemiah was in a very trusted security position. He must have earned that position through years of faithful service and a display of integrity. Those years of commitment may have seemed to have had little impact on the Kingdom of God, but they led up to this one moment of influence.

Consider: God knows where He has you and why He has you there. Be faithful and He will use that influence in His time.

‘But the natural man receiveth not the things of the Spirit of God, neither can he know them, because they are spiritually discerned.’ 1 Corinthians 2:14

The same power which raised Christ Jesus from the dead must be exerted in raising us from the dead; the very same omnipotence, without which angels or worms could not have had a being, must again step forth out of its privy-chamber, and do as great a work as it did at the first creation in making us anew in Christ Jesus our Lord. There have been attempts at all times to get rid of this unpleasant necessity. Constantly the Christian church itself tries to forget it, but as often as ever this old doctrine of regeneration is brought forward pointedly, God is pleased to favour his church with a revival. The doctrine which looks at first as though it would hush every exertion with indolence, and make men sit down with listlessness and despair, is really like the trump of God to awake the dead; and where it is fully and faithfully preached, though it grate upon the carnal ear, though it excite enmity in many against the man who dares to proclaim it, yet it is owned of God. Because it honours God, God will honour it. This was the staple preaching of Whitefield. He was always great upon that which he called the great R—Regeneration. Whenever you heard him, the three Rs came out clearly—Ruin, Regeneration, and Redemption! Man ruined, wholly ruined, hopelessly, helplessly, eternally ruined! Man regenerated by the Spirit of God, and by the Spirit of God alone wholly made a new creature in Christ! Man redeemed by precious blood from all his sins, not by works of righteousness, not by deeds of the law, not by ceremonies, prayers, or resolutions, but by the precious blood of Christ! We must be very pointed, and very plain about regeneration, for this is the very pith and marrow of the matter—‘Except a man be born again, he cannot see the kingdom of God.’

In 1885 while only twenty-eight years old, Edward Thompson secured a diplomatic post in Mexico to be close to the archaeological digs near the ancient home of the Chichén Itzá people. There, he explored ruins, unearthing previously buried buildings, often a brick at a time. He discovered crypts that had been concealed for centuries.

The more he searched, the more he found. For forty years, he made discoveries other explorers failed to find.

One particular site fascinated him. As he studied the ancient records, he determined that a major well had to be present in this location. The problem? There was no visible trace of this well. Digging beneath the city’s main plaza, he found the well, using techniques never previously used in archaeology.

Because Thompson persevered, he made a major discovery, and archaeologists were given a fresh perspective on the Mayan culture.

The Bible tells us that perseverance is important in our lives. Many Christians fail to find answers to problems because they give up too soon. Others do not receive the wisdom God can reveal because they do not persevere. Some fail to experience His transforming power because they do not have faith or ask. They forget that Jesus commanded us to come to the Father with confidence, asking for what we need. There are no restrictions or limits!

Today, ask. Seek. Knock. Persevere until you get the answers you need.

Do not say, “Why were the old days better than these?” For it is not wise to ask such questions.
Ecclesiastes 7:10
DailyVerses.net