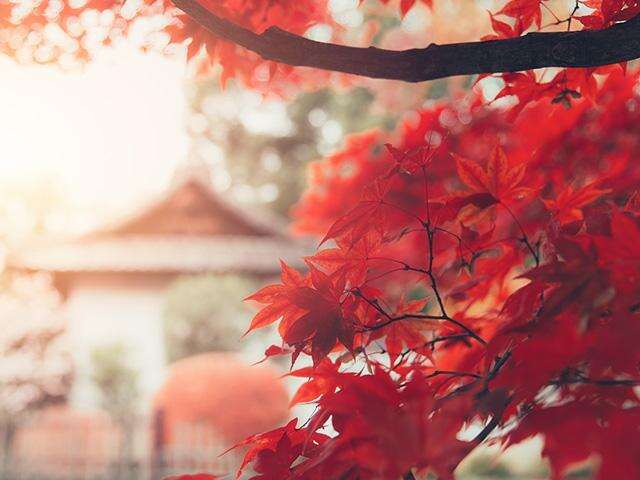 Coming and going through my neighborhood, I’ve never noticed this particular tree. But this day — Wow! The afternoon sun shone the right amount of light, at the perfect angle, to bring this red maple from ordinary to stunning. I slowed down and admired its beauty.

The splendor of God’s creation could be seen in each slight variation as the distinct red shades of crimson, scarlet, and burgundy radiated in the sunlight.

It made me think of references to Jesus as light and His followers as those who have light to keep them from the darkness.

Then Jesus spoke to them, saying, “I am the Light of the world; he who follows Me will not walk in the darkness but will have the light of life.” (John 8:12 NLT)

Just as an ordinary tree becomes magnificent when the sunlight hits it a certain way, ordinary human beings become filled with the light of life through Christ. God gives us hope and it makes us confident.

I pray that your hearts will be flooded with light so that you can understand the confident hope he has given to those he called—his holy people who are his rich and glorious inheritance. (Ephesians 1:18 NLT)

“And this hope does not lead to disappointment. For we know how dearly God loves us because he has given us the Holy Spirit to fill our hearts with His love.” (Romans 5:5 NLT)

As God’s children, the hope living within us is the Holy Spirit and has the power to bring hope to others. It is the Light. We bring light in a dark world when we follow the ways of Jesus Christ. We extend love, joy, peace, patience, kindness, goodness, faithfulness, gentleness, and self-control — the fruit of the Spirit (Galatians 5:22-23). The evil in the world offers the opposite: hate, despair, chaos, impatience, ill will, cruelty, disloyalty, harshness, and instability.

Our Creator provides all we need to let the light of His redeeming love bring out the best in us – so we can stand out in this world and cause others to slow down to notice Him, His ways, His beauty.

On my commute the next day, I looked for the red maple. Couldn’t find it. The sky was overcast and it was back to blending in with the other trees. I was disappointed but not surprised. When the light is muted, so is the beauty of my neighborhood … and our society.

Lord, help us surrender our pride and any other sin blocking Your light from shining brightly through us. You give us the power to be positive and holy examples. Help us shine each day and refuse to be satisfied with blending in. We cannot do it on our own and ask You to fill us anew with Your light. We agree to trust You and obey You. Please use us, Lord, to magnify Your beauty and cause others to slow down and see what You are all about. Build your Kingdom, oh Lord, with new hearts who are attracted to You — the Light of the world.

“You have heard that it was said, ‘Love your neighbor and hate your enemy.’ But I tell you, love your enemies and pray for those who persecute you.” — Matthew 5:43-44

We often think of enemies in connection with war: enemies live in other countries and on other continents.

But Jesus is focusing much closer to home: the neighbor who throws loud all-night parties, the uncle who is abusive, the kid who bullies your little brother. We are angry with them. We would like to see them corrected, perhaps even punished!

And yet Jesus tells us to love them! That doesn’t necessarily mean feeling good about them. I love my daughters, and it is good to spend time with them. But that’s not what Jesus means here. The love word he uses suggests action; Jesus is telling us to act in a loving way toward people who are difficult to love.

God does not expect us to make friends with people who disrespect us, or to tolerate abuse from them. But as we faithfully pray for them, God will help us think compassionately about them, and begin to act kindly toward them, and even learn to speak truth to them with love and respect.

Dear Jesus, help us to love and pray for neighbors who are not loving, and who perhaps are even mean to us. May they see your love through our kind words and actions. Amen. (AM)

“He also made ten basins in which to wash, and he set five on the right side and five on the left to rinse things for the burnt offering; but the sea was for the priests to wash in.” – 2 Chronicles 4:6 NASB

While the Israelites were in the wilderness, God commanded them to build a tent of meeting. In that tent, they were to have a laver (washbasin), a place where Aaron and his sons were to “wash their hands and their feet” before entering the tent. This was very serious, something no one could take for granted. They were to “wash with water, so that they will not die” (Exodus 30:18-21).

But the laver was not just for this tent. When it was time to build the temple in Jerusalem, the Israelites again made basins as places for the priests to wash. Why was this so important? Because God is holy and cannot tolerate the presence of sin. He wanted them to realize that they had to be clean and pure when they came into His presence.

David recognized this principle when he wrote that only those with “clean hands and a pure heart” may “stand in His holy place” (Psalm 24:3-4).

The Bible reminds us that God wants to fellowship with you. He longs to hear from you and answer your prayers. He wants to bless you, grant you more of His wisdom and favor, and reveal more truths to you. But when you approach Him, remember that He is holy. Humble yourself before Him. Confess your sins and receive His forgiveness. With clean hands and a pure heart, approach His throne. You can be confident and bold!

The Living God – Streams in the Desert – January 17

O Daniel, servant of the living God, is thy God whom thou servest continually, able to deliver thee? (Daniel 6:20).

How many times we find this expression in the Scriptures, and yet it is just this very thing that we are so prone to lose sight of. We know it is written “the living God”; but in our daily life there is scarcely anything we practically so much lose sight of as the fact that God is the living God; that He is now whatever He was three or four thousand years since; that He has the same sovereign power, the same saving love towards those who love and serve Him as ever He had and that He will do for them now what He did for others two, three, four thousand years ago, simply because He is the living God, the unchanging One. Oh, how therefore we should confide in Him, and in our darkest moments never lose sight of the fact that He is still and ever will be the living God!

Be assured, if you walk with Him and look to Him and expect help from Him, He will never fail you. An older brother who has known the Lord for forty-four years, who writes this, says to you for your encouragement that He has never failed him. In the greatest difficulties, in the heaviest trials, in the deepest poverty and necessities, He has never failed me; but because I was enabled by His grace to trust Him He has always appeared for my help. I delight in speaking well of His name.
–George Mueller

Luther was once found at a moment of peril and fear, when he had need to grasp unseen strength, sitting in an abstracted mood tracing on the table with his finger the words, “Vivit! vivit!” (“He lives! He lives!”). It is our hope for ourselves, and for His truth, and for mankind. Men come and go; leaders, teachers, thinkers speak and work for a season, and then fall silent and impotent. He abides. They die, but He lives. They are lights kindled, and, therefore, sooner or later quenched; but He is the true light from which they draw all their brightness, and He shines for evermore.
–Alexander Maclaren

“Moreover, he said that Christ was the home of his thoughts. Whenever his mind was free from other matters it would turn to Christ; and he would talk aloud to Christ when he was alone — on the street, anywhere — as easily and naturally as to a human friend. So real to him was Jesus’ actual presence.

You, Lord, reign forever; your throne endures from generation to generation.
Lamentations 5:19
DailyVerses.net