And the Word became flesh, and dwelt among us, and we saw His glory, glory as of the only begotten from the Father, full of grace and truth. – John 1:14

If I had to choose a favorite moment in the life of Christ, it would probably be the story of the blind man in John 9. Most Christians are familiar with the passage, it begins with Jesus walking through the temple with his disciples when they come across a man born blind.

“As He passed by, He saw a man blind from birth. And His disciples asked Him, ‘Rabbi, who sinned, this man or his parents, that he would be born blind?’ Jesus answered, ‘It was neither that this man sinned, nor his parents; but it was so that the works of God might be displayed in him.” – John 9:1-3

For a long time, I believed the “works” Jesus talked about meant healing the man’s blindness. That’s what the story was all about, wasn’t it? Jesus performing a miracle to prove he was the Son of God? Actually, no. In fact, the real message of John 9 turned out to be something much different.

After receiving his sight, the man is brought before the Pharisees to be questioned. The religious leaders are torn: this Jesus performed a miracle, so he must be some kind of prophet, but he did so on the Sabbath, a true man of God wouldn’t break the Sabbath. Eventually, they just decide to pull rank (We are the Pharisees, We decide who gets credit for this miracle!) Listen to how the once-blind man responds,

“The man answered and said to them, ‘Well, here is an amazing thing, that you do not know where He is from, and yet He opened my eyes. We know that God does not hear sinners; but if anyone is God-fearing and does His will, He hears him. Since the beginning of time it has never been heard that anyone opened the eyes of a person born blind. If this man were not from God, He could do nothing.’ They answered him, ‘You were born entirely in sins, and are you teaching us?’ So they put him out.”

If Jesus had wanted to be recognized for his power he would have ridden into Jerusalem as the conquering hero the Jews expected him to be. Instead, he came quietly, touching the lives of the lost and overlooked. His “works” were the restoring of hearts and souls, not just physical bodies. By doing so, he gave a blind man the ability to see truth, where the Pharisees became blind to it. Let us make sure the Church doesn’t become blind as well.

Trusting God’s Will Over Our Way 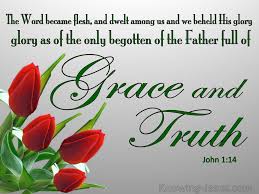 “Commit to the LORD whatever you do, and he will establish your plans.” Proverbs 16:3 (NIV)

As a young working woman in her mid-20s, I’d spent most of my life thinking about this season and all I wanted to achieve — finding a more fulfilling role where I’d be able to use my creative and leadership gifts. I was ready to take on the goals I had long planned for.

Instead, I was met with disappointment, discontent, and more administrative work and spreadsheets than anything else. Mentally and emotionally exhausted, I was running myself into the ground while trying to grow in my career, sacrificing the very things God had placed before me as my portion to steward: time with my family and time with Him. I had followed my way before even asking God about His will.

Deep down, I knew God wanted good things for me, but honestly, I thought my way seemed better.

There was very little prayer involved in this season of my life. When I did pray, my prayers were more like petitions, asking God to bless my plan rather than to help me follow Him. The more I strived to follow my desires, the more my soul withered. I had created an idol out of my dreams and allowed performance and success to become little gods in my life.

Something had to change before something else in my life suffered. I needed to recommit the work of my hands and my heart’s desires to the Father, as our key verse says: “Commit to the LORD whatever you do, and he will establish your plans” (Proverbs 16:3).

I went before God with my hands and heart open, asking Him to do a new thing in me, settle my soul and help me remain faithful to the season He’d called me to. I sat with Him and listened as I read the Scriptures and sought out His wisdom.

Slowly but surely, my heart began to turn back to God. Finger by finger, I released my tight grip on the idols that had become the center of my affection. God was inviting me into total surrender and trust, asking me to commit to Him all that had been set before me and everything that was in me.

Proverbs 16:3 speaks beautifully to the heart of this. Solomon was a man who walked in wisdom at the time he wrote this proverb. He understood the importance of committing his heart and work to the Lord and had done so for many years, building the temple and serving God faithfully. (1 Kings 6:14) However, somewhere along his journey, he began to turn away from God, giving in to his desire to marry many foreign women, which led him into a life of idolatry and sin. (1 Kings 11:1-13) He failed to commit His whole heart over to God and steward well what God had continued to call him to.

The word “commit” in Hebrew means “to roll away,” to let go of all we think we must carry and do. To roll toward God all of our heart’s desires, leaving them at the feet of Jesus. What a beautiful picture of trust and surrender — to open our heart and hands, releasing the grip we’ve tightly held around the things we long for and maybe even idolize. Had Solomon surrendered his desires and plans to God, had he trusted God with his whole heart, he likely would’ve seen that on the other side of obedience is abundance. (John 10:10)

This is God’s desire for us: to commit our life and plans to Him while trusting His leading and guidance.

God had better things ahead for Solomon and has better things for us today. God’s will for our lives will always be best — taking what’s in our hearts and conforming it to His. Friends, our desires, left unchecked, will open the door to a life fueled by pride and idolatry, turning us away from the Lord. But when we seek God in all things, we learn that what our hearts truly desire can only be found in Jesus. And as we commit to follow Him, He will lead us in the path of righteousness. (Psalm 23:3) 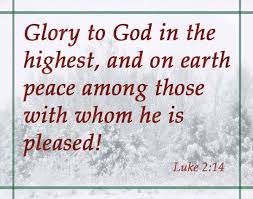 2 Samuel 16:1-2 1When David had gone a short distance beyond the summit, there was Ziba, the steward of Mephibosheth, waiting to meet him. He had a string of donkeys saddled and loaded with two hundred loaves of bread, a hundred cakes of raisins, a hundred cakes of figs and a skin of wine. 2The king asked Ziba, “Why have you brought these?” Ziba answered, “The donkeys are for the king’s household to ride on, the bread and fruit are for the men to eat, and the wine is to refresh those who become exhausted in the desert.”

Remember Ziba? He was Saul’s servant. David appointed him and his family to be servants of Jonathan’s son, Mephibosheth. It isn’t clear if Mephibosheth was planning his own rebellion to restore Saul’s throne in the chaos, or if Ziba was conniving to take back over the property of Saul, but the result was that David’s young children and wives were provided animals to ride so that they could keep up. Ziba also provided food to nourish them all on the journey. What David could not prepare in the short notice and sudden flight, God provided from an unlikely source. We can know that when we are in the middle of calamity, God will still be faithful and can meet our needs.

All Israel was choosing sides out of their own personal interests. Will you side with the usurper or with the true King? The usurper promises position and power, but he cannot deliver. You will find true freedom with hardship if you follow the true King. Your service will be rewarded for he is just and genuinely appreciative.

Consider: Every day we are tempted to side with the enemy. He promises what he can never deliver. Follow the true King, even when it is difficult.

The Power of the Holy Spirit 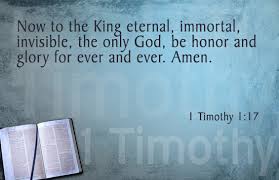 “You will receive power when the Holy Spirit comes on you; and you will be my witnesses.” — Acts 1:8

My testimony depends on the power of the Spirit, not on my own abilities or strength of will. When two friends in college invited me to spend six weeks traveling in the Rocky Mountains and sharing our faith, I thought I was prepared because I had been trained in evangelism.

We practiced some songs that we planned to share around a campfire along with our personal stories about our faith. But when I tried to testify about my faith, nothing happened. The harder I tried, the more frustrated I became.

As we traveled, we heard about a coffeehouse where people were being saved every week. The head of the coffeehouse said something that I have not forgotten: “The only person who can live the Christian life is Jesus Christ.”

I realized I would have to give up trying to live the Christian life on my own and to ask the Holy Spirit to live through me. As I did that, the power of the Spirit filled me. My mouth overflowed with praise, and I saw a heavenly vision of thousands of people on their knees worshiping a lamb on a distant throne.

The trip totally changed ­after that. I would begin talking with people, and they would become convicted of a need in their life. I would pray for them, and the Spirit would transform their lives. When I got back to college, I began sharing with old friends, and their lives began to change.

It is true. There is a power to witness that comes only from the Holy Spirit.

Spirit, lead us to surrender our lives to you, and please empower us to be your witnesses. Amen.

Each of us should please our neighbors for their good, to build them up.
Romans 15:2
DailyVerses.net