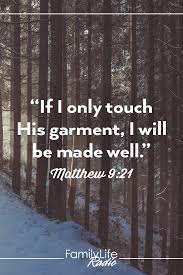 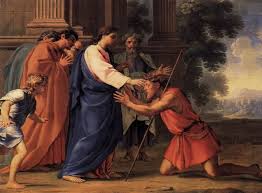 “And a certain woman, which had an issue of blood twelve years, and had suffered many things of many physicians, and had spent all that she had, and was nothing bettered, but rather grew worse, when she had heard of Jesus, came in the press behind, and touched his garment. For she said, if I may touch but his clothes, I shall be whole.” Mark 5:25-28 (KJV)

This woman was plagued with an issue of blood for 12 years. To have a cold or a sore throat for a few days is uncomfortable. Whenever I feel those well-known symptoms coming on, I immediately run to the store to purchase an over the counter anti-flu remedy. I want to nip it in the bud. Try to avoid any discomfort. Twelve years? Can you imagine being ill for 12 years? Illness wears our bodies out, not only physically causing weakness, but also emotionally; sometimes causing frustration and irritability. She “had spent all that she had.” Plus, medical care is expensive. The Scripture tells us that “she had heard of Jesus.” I believe she had heard the good news about many who were touched by Jesus, and healed of different diseases, and she began to have hope.

“And Jesus went about all Galilee, teaching in their synagogues, and preaching the gospel of the kingdom, and healing all manner of sickness and all manner of disease among the people.” Matthew 4:23 (KJV)

Years ago during my illness, even though trusting God for healing, I would think thoughts such as:

Between chemotherapy treatments, I feared my blood count levels would not stabilize. And my fears were not confirmed, because they did. I feared all my hair would fall off, but instead, it grew. I am sure the woman had fears. A touch from Jesus will calm our fears.

Daily, my prayer is, “Father, touch me today.” Our Heavenly Father waits to hear and to answer that prayer.

How do we receive a touch from the Master? Trust is the key. The woman with the issue of blood said in her heart: If I only touch the hem of His garment, I shall be healed. She believed all she needed was a touch from Jesus. She trusted and had confidence that if she just touched the hem of His garment, she would be made whole. She had confidence that when she touched Him, she would receive healing.

Do you need a touch from the Master today? Then lift your voice and say, “Jesus I need your touch.” Believe and have confidence that you will receive His powerful touch!

Father, as I join my faith with those reading these words who need a touch from You, touch and remove fear, touch and build faith, touch and heal. In Jesus’ name, Amen!

Saul also went to his home at Gibeah, and with him went men of valor whose hearts God had touched. (1 Samuel 10:26)

How does the circumference of Jupiter touch the edge of a molecule? Let alone penetrate to its nucleus?

O Lord, come. Come that close. Burn and soak and blow and crash. Or still and small, come. Come all the way. Touch our hearts.

Jesus Heals: Hope from the Woman Who Reached Out to Touch Him

Read the story this morning, of the woman who was healed when she reached out to touch the cloak of Jesus. She’d been suffering for years with an illness, a bleeding disorder. She’d been to many doctors and yet still was not made well, in fact the Bible says that she grew worse.

But something compelled her to Christ.

She knew where help would be found.

The crowd around Him was large, they followed and pressed close. I can almost see her, making her way through the people, quietly, determined, heart resolute just to reach Him. Just to touch Him. She knew He held power. She’d heard all the stories and here He was, so close, so near.

“…she came up behind Him in the crowd and touched His cloak, because she thought, ‘If I just touch His clothes, I will be healed.'” Mark 5:27-28

And that was all it took.

The Bible says that “Immediately her bleeding stopped and she felt in her body that she was freed from her suffering.” v. 29

God acted on her behalf…”immediately.” Right away.

Jesus knew that power had gone out…He turned around in the crowd, looking, and asked “Who touched my clothes?” v. 30.

His disciples didn’t get it, they said, “What do mean, there’s a whole crowd here, everyone is pressing close…” Yet Jesus knew differently. He saw what they couldn’t. He knew what they didn’t. And He kept looking. I wonder if He noticed her fear. I wonder if His eyes locked on hers. Compassionate, loving, kind, generous eyes.
She came and fell at His feet, trembling in fear, told Him what happened, told Him the truth. Maybe she thought He’d be angry. Or question her, or shame her.

And right there in the midst of her fear and her trembling and her vulnerability, He said these powerful words. Life-changing, inspiring, freedom words, “Daughter, your faith has healed you. Go in peace and be freed from your suffering.” v. 34

Maybe we look all different places for help, yet forget we can press in towards our Savior. Maybe we forget that He never changes, and He still holds the power to heal and set free. Maybe we don’t believe that He can, or wants to, work on our behalf. Maybe we forget at times, that He’s still the God of miracles, that He can act “immediately,” that He can do in a moment what might take years for us to work through on our own.

Let’s set aside our fears and move towards Him today, in faith. Let’s press in close, and reach out to the One who is All-powerful, compassionate, loving, and kind. He knows already, the wounds we’ve carried, He knows the pain we’ve felt, He knows how much we’ve tried to let go, and fix things in our own power. Let’s choose to believe that our situation or circumstance is never too big for Him to bring healing and freedom. He is Able. Nothing is too difficult for Him.

Grace to you today my friends…He is always within reach. He is never far away. He is close. He is with us.

He cares. He heals. He restores. He redeems.

Walk in His freedom and healing.

So thankful for our Savior.

He humbled you, causing you to hunger and then feeding you with manna, which neither you nor your ancestors had known, to teach you that man does not live on bread alone but on every word that comes from the mouth of the Lord.
Deuteronomy 8:3
DailyVerses.net