Genesis 3:8      They heard the sound of the LORD God walking in the garden in the cool of the
day, and the man and his wife hid themselves from the presence of the LORD God among the
trees of the garden.
Genesis 3:10      He said, “I heard the sound of You in the garden, and I was afraid because I
was naked; so I hid myself.”
Isaiah 6:8      Then I heard the voice of the Lord, saying, “Whom shall I send, and who will go
for Us?” Then I said, “Here am I. Send me!”
Exodus 19:9      The LORD said to Moses, “Behold, I will come to you in a thick cloud, so that
the people may hear when I speak with you and may also believe in you forever.” Then Moses

told the words of the people to the LORD. 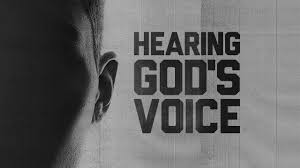 Be joyful in hope, patient in affliction, faithful in prayer. Romans 12:12

Diane listened as the others in the group asked for prayers for their family members and friends facing challenges or illness. She had a family member who had been struggling with an addiction for years. But Diane kept her request silent. She couldn’t bear to see the looks on people’s faces or hear the questions or advice that often followed whenever she spoke the words aloud. She felt that this request was usually better left unspoken. Others simply didn’t understand how her loved one could be a believer in Jesus and still struggle daily.

Although Diane didn’t share her request with that group, she did have a few trusted friends she asked to pray with her. Together they asked God to set her loved one free from the very real bondage of addiction that he might experience freedom in Christ—and that God would give Diane the peace and patience she needed. As she prayed, she found comfort and strength from her relationship with Him.

Many of us have earnest, persistent prayers that seem to go unanswered. But we can be assured that God does care and He does hear all our requests. He urges us to continue to walk closely with Him, being “joyful in hope, patient in affliction, faithful in prayer” (Romans 12:12). We can lean on Him.

Lord, Your Word urges us to pray continually. Help us to be persistent in prayer, and enable us to be faithful partners in prayer with others.

Let us draw near to God with a sincere heart and with the full assurance that faith brings. Hebrews 10:22

‘When Jesus therefore had received the vinegar, he said, It is finished: and he bowed his head, and gave up the ghost.’ John 19:30

When Christ said ‘It is finished,’ the words had effect on heaven. Before, the saints had been saved as it were on credit. They had entered heaven, God having faith in his Son Jesus. Had not Christ finished his work, surely they must have left their shining spheres, and suffered in their own persons for their own sins. I might represent heaven, if my imagination might be allowed a moment, as being ready to totter if Christ had not finished his work; its stones would have been unloosed; massive and stupendous though its bastions are, yet had they fallen as earthly cities reel under the throes of earthquakes. But Christ said, ‘It is finished,’ and oath, and covenant, and blood set fast the dwelling-place of the redeemed, made their mansions safely and eternally their own, and bade their feet stand immovably upon the rock. Moreover, that word ‘It is finished!’ took effect in the gloomy caverns and depths of hell. Then Satan bit his iron bands in rage, howling, ‘I am defeated by the very man whom I thought to overcome; my hopes are blasted; never shall an elect one come into my prison house, never a blood-bought one be found in my abode.’ Lost souls mourned that day, for they said, ‘It is finished! and if Christ himself, the substitute, could not be permitted to go free till he had finished all his punishment, then we shall never be free.’ It was their double death-knell, for they said, ‘Alas for us! Justice, which would not allow the Saviour to escape, will never allow us to be at liberty. It is finished with him, and therefore it shall never be finished for us.’

For meditation: Heaven and hell are the only places where it can be said ‘It’s started, so it will never finish’ (Matthew 25:46; Luke 16:26). We, who are by nature God’s enemies (Romans 5:10), can be delivered from the prison of hell only by the full payment of the penalty for our sins—either we accept now that Christ has fully paid that penalty, or we commit ourselves to the never-ending task of paying the penalty ourselves (Matthew 5:25–26). A friend shared her story with me:

Mom married Dad and soon found herself in a horribly abusive union. His abuse didn’t stop with her. We children suffered under his tirades also. Many years later before she died, she shared a couple of incidents with me, her daughter.

At any minute Dad would fly into a rage with no real provocation. It could be caused by a slight misstep. A burned potato. Or a word said with a wrong inflection. All our lives were a constant tight-rope walk. His evil nature ever simmered below the surface like an agitated volcano, ready to erupt at any minute.

Mother learned early in life to rely on Jesus. Life married to Dad drove Mother more solidly into Jesus’ arms. I truly believe she would have died at Dad’s hand, had it not been for Jesus’ protection.

She told me about a time she stood in her bedroom and heard him snarl from the kitchen, “I’m going to kill you.”

By this time she was so worn from his explosions she prayed, “Lord, either save me or take me. I’m so weary.”

His stocky footsteps thundered down the hall toward the bedroom. She braced for what was coming.

When he reached the open doorway he bounced back as if he had hit an invisible plate glass door. The impact threw him to the ground.

Mom turned to see him on all fours shaking his full head of dark brown hair, stunned.

“I’ll get you for this,” he said as he rose to charge a second time. He hit the invisible shield again and bounced back. He turned, rubbed his head, and staggered to his easy chair in the living room.

“He never spoke of it again,” Mom said.

I asked her why she didn’t leave him.

“Our pastor told me it was immoral to divorce or leave him. He said I should not provoke him. I tried. It didn’t work.”

On another occasion, after the children were grown and married, they moved to an acreage with a pond on the outskirts of the city. Mom wasn’t a very proficient swimmer but did enjoy an occasional dip in cool water on a hot summer day. One day she floated in the pond. She saw Dad stomping toward her, fists clenched, spewing curses.

He waded into the water and reached for her arm with his huge hand. His grip failed. Each time he grabbed her he couldn’t hold on.

“It was like I was all greased up,” she said.

Finally, in frustration, he left, cursing as he went.

Shortly after, the Lord spoke to her heart. “I’ve saved you these many times from his murderous hand. You must not keep assuming I will rescue you. You must take responsibility. It’s time for you to get away from him. Leave him and don’t come back.”

Mom finally did leave him. It took all the children to help her escape. Finally, in her late 50s, she was free of his daily abuse.

God is merciful. He desires all to come to Him rather than spend an eternity in hell. He will go to any length to bring a wayward sheep home.

Dad found the Lord in his later years but was tormented by the memory of the hurt he had inflicted on others. He did not believe his sins would be completely covered by Jesus’ blood. He lived in daily fear of hell.

When Dad was in his 80s and still lucid, alone in a nursing home, his niece came to see him.

He greeted her with excitement and said, “I’m not going to hell. They called me on the phone and told me. They said when I die it will just be a transition; a change into another type of life.”

He was finally at peace. He died unexpectedly a month later. Oh, and Dad’s room didn’t have a phone.

“He will give His angels charge concerning you, to guard you in all your ways.” Psalm 91:11 (NASB)

“…not wishing for any to perish but for all to come to repentance.” 2 Peter 3:9b (NASB)