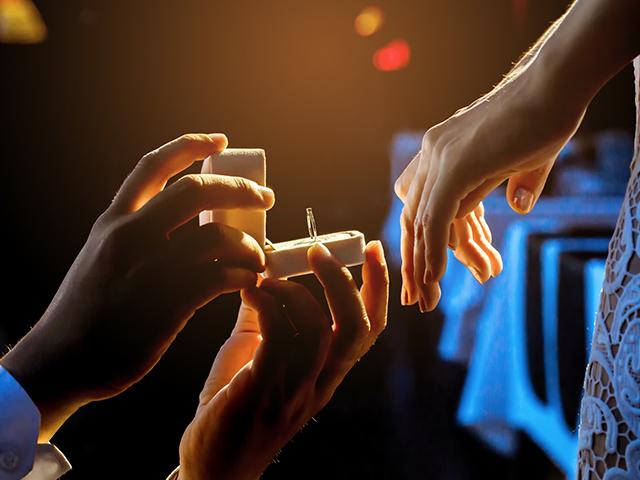 “Happy Birthday! And congratulations on your engagement!”

Our waiter’s words should have evoked squeals of elation. Instead, I stared at him in disbelief. After an awkward eternity of silence, I stammered, “Uh… well, thank you… but, he hasn’t asked me… yet.”

The waiter’s face turned every shade of shame, as he apologized profusely for letting the cat out of the bag. For a fleeting moment, I actually felt sorrier for him than for myself. My boyfriend – the coward – received no such pity, as he sheepishly grinned at me from across the table.

It wasn’t like I didn’t see it coming. It was my 18th birthday, and my father had surrendered his Cadillac, his credit card, and his personal country club membership card to ensure the night was extra special.

We had spent the evening giggling, whispering, and holding hands, trying to ease the awkwardness of being the only two diners in the entire restaurant. Later, we retreated to the balcony for a moonlit stroll. A surreal harvest moon engulfed our starry backdrop and stretched across the glassy lake. The warm August breeze twirled my long wavy hair, as swans danced across the water. It was the stuff that movies are made of.

But apparently, Prince Charming chickened out.

Unaware that my sweetheart had missed his cue, our unsuspecting waiter proceeded to extend his blessing on our hasn’t-happened-yet-but-should-have engagement. Had it actually been a movie, I would have screamed, “Cut!” and insisted on a retake. But it wasn’t, so we stumbled back out onto the balcony, where my boyfriend attempted to redeem himself by finally popping the question, himself, and offering his family’s prized heirloom – his Grandmother’s engagement ring.

It wasn’t the knight-in-shining-armor moment I had pictured in my head, ever since I was a little girl. But, I swallowed my disappointment and allowed my knight-in-tarnished-tinsel a chance for redemption.

I even allowed the waiter a chance for redemption, by insisting he serve our wedding cake at our reception. After all, he had officially popped the question.

Over the years, our “Happily Ever After” hasn’t always been the fairy tale we hoped for. “For richer or for poorer, in sickness and in health” have been tougher promises than either of us ever expected. But through it all, we’ve found hope in offering each other one more chance for redemption.

Our heavenly Father surrendered His greatest treasure, Jesus, to offer us His proposal – our chance for redemption. If we surrender our own personal agendas and say “Yes” to Him, we find ourselves engaged in the greatest love story ever written. It isn’t always “Happily Ever After” either, but it’s worth every drop of blood, sweat, and tears we invest. Heaven knows, God invested His own blood, sweat, and tears into pursuing a relationship with us.

“In Him we have redemption through His blood, the forgiveness of sins, according to the riches of His grace” Ephesians 1:7 (NKJV)

How can we deny each other the redemption He so freely offers us?

These past few years have been the hardest, as my husband has struggled to keep his small business afloat. About a year ago, one business debt snowballed into a potential lawsuit. We made the heartbreaking decision to sell the ring he gave me that tender August night to pay the debt. The jeweler, a Christian, happily made arrangements for us to buy it back. But last summer, as we struggled with the foreclosure of our home, we realized we could no longer make the payments and would have to let it go.

That same summer, our daughter met a godly young man named Shane. They quickly became best friends. I met him the night before they drove 1,300 miles away to attend Bible College together. A week later, he called to ask permission to court her.

While sharing their hopes and dreams over endless cups of coffee, Shane learned the story of our lost family heirloom. Shortly thereafter, he called to ask permission to redeem the ring with the intention of offering it to our daughter.

On a recent starry night… high atop a moonlit rooftop… kneeling on one knee… Shane placed our family heirloom on our daughter’s finger and asked for her hand in marriage.

“If one of your brethren becomes poor, and has sold some of his possession, and if his redeeming relative comes to redeem it, then he may redeem what his brother sold” Leviticus 25:25 (NKJV)

Exodus 31:13 (NIV) 13“Say to the Israelites, ‘You must observe my Sabbaths. This will be a sign between me and you for the generations to come, so you may know that I am the LORD, who makes you holy.

The Israelites had weekly Sabbaths (a day of rest), but they also had new moon Sabbaths and other special Sabbath days related to their feasts. On those days, there were restrictions as to how much they could do and how far they could go. All these were designed to have them take time to contemplate the God they served. They were to be still for a day to focus upon God. The above verse teaches that the reason for the Sabbath was to know who the LORD is and that He is the One who makes us holy. It seems that they missed the whole point of the exercise and concentrated on the rules surrounding the Sabbath instead of the purpose. They thought that keeping the rules made them holy, when it is clearly the LORD that makes them holy.

They had the example in Abraham who was declared right with God by simply believing in God before he had done anything the Lord asked. They also had the example of the man recording this passage, Moses. He was a murderer and failed miserably when he tried to do it his own way. But when we know we can’t do it ourselves, that holiness is unattainable by our efforts, we finally look to the LORD who makes us holy. Though, at that time, they did not understand how, they simply needed to believe He would. It is the trust placed in God, not a detailed understanding of the process that makes men right with God, both then and now. He makes us holy. His work will transform our lives when our trust is placed in Him.

Meditation: Consider that it is the LORD who makes you holy.

Streams in the Desert – February 19

And every branch that beareth fruit he purgeth it, that it may bring forth more fruit (John 15:2).

A child of God was dazed by the variety of afflictions which seemed to make her their target. Walking past a vineyard in the rich autumnal glow she noticed the untrimmed appearance and the luxuriant wealth of leaves on the vines, that the ground was given over to a tangle of weeds and grass, and that the whole place looked utterly uncared for; and as she pondered, the Heavenly Gardener whispered so precious a message that she would fain pass it on:

“My dear child, are you wondering at the sequence of trials in your life? Behold that vineyard and learn of it. The gardener ceases to prune, to trim, to harrow, or to pluck the ripe fruit only when he expects nothing more from the vine during that season. It is left to itself, because the season of fruit is past and further effort for the present would yield no profit. Comparative uselessness is the condition of freedom from suffering. Do you then wish me to cease pruning your life? Shall I leave you alone?”

And the comforted heart cried, “No!”

“He sends from heaven and saves me, rebuking those who hotly pursue me – God sends forth his love and his faithfulness.” – Psalm 57:3 NIV

David was fleeing for his life. Trying to escape the relentless pursuit of King Saul, he hid in a cave. Still feeling vulnerable, he wrote this psalm.

Conscious of his urgent need for God’s help, he cried out for mercy. He had nowhere else to turn. David took refuge in the shadow of His wings. There, he would stay until the threat had passed and God vindicated him.

David was conscious that God would save him from “those who hotly pursue me.” The Hebrew word here suggests being hounded and chased by a person breathlessly determined and motivated by intense anger. This surely describes the way Saul was pursuing him.

We feel vulnerable many ways. We might feel chased, backed into a corner, and not sure what to do. We might feel pursued by people seeking to silence our testimony. When we can’t find peace and when others twist our words, we feel overwhelmed.

As David discovered, in moments like these we need to turn to God. Cry out for His help. Remember His promises. Remember we can find refuge in Him, even when we can’t seem to find peace in the world.

What situations do you face today? Do you feel vulnerable? Hounded? Tell God every detail of your feelings and fears. Confess His promises. And trust in Him. As David discovered, He can send forth His love and faithfulness
because He loves you, and He is faithful.

Do not be yoked together with unbelievers. For what do righteousness and wickedness have in common? Or what fellowship can light have with darkness?
2 Corinthians 6:14
DailyVerses.net