29  “Come,” said Jesus.  Then Peter got down out of the boat, walked on the water, and came toward Jesus.

30  But when he saw the strength of the wind,c he was afraid, and beginning to sink, cried out, “Lord, save me!”

31  Immediately Jesus reached out His hand and took hold of Peter. “You of little faith,” He said, “why did you doubt?”

32  And when they had climbed back into the boat, the wind died down.

33  Then those who were in the boat worshiped Him, saying, “Truly You are the Son of God!”

Coyotes and Other Hazardous Threats 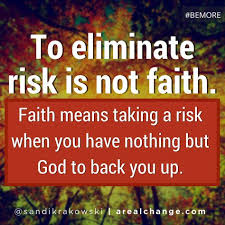 CBN.com Coyotes frequently show up on my street. No, I don’t live in the middle of Montana, I live smack in the middle of Phoenix—a major metropolis. But my neighborhood is bordered by a desert mountain preserve, and since there is no giant wall with a Keep Out sign posted, wildlife and city dwellers often cross paths. My sweet, aging tabby (Bagheera—we called him Baggie) was snatched from our front yard a couple years ago by one of these hungry hunters, never to be seen again.

This can present a problem in that many of us city folk have beloved pets stashed away in our homes and yards. We have the illusion that they are safe but the truth is that a coyote can, and will, jump a six foot fence without breaking stride to get a tasty morsel you affectionately know as Mitzy. Red Tail hawks and Great Horned Owls are also out scouting for sustenance and can swoop down from the sky right into a fenced back yard to grab an eight pound kitty or even a ten pound dog. This was recently demonstrated by the fact that Lucy, an 11 1/2 –pound terrier mutt survived an owl attack because she was just a bit too heavy to be carried away like Toto.

The common thread is that these predators hunt stealthily for food and don’t care about your love affair with it. They also don’t know that it is supposed to be protected.

Just as we are lulled into a false sense of security about our pets’ safety, we often forget that there are hazards all around us that threaten our existence too. They come in the form of busyness that can snatch our attention from our family; fear that can keep us from trying something new; materialism that can cause us to lose perspective; lust which can damage our marriage; pride which can cause us to put ourselves ahead of others and hopelessness which can diminish our faith and rob our joy. John 10:10 says, “The thief comes only to kill, steal and destroy.”

These marauders are just as treacherous as any wily coyote or cunning hawk. They are also insidious. They sneak up on us and we never see them enter our life but they are a serious threat all the same. Prevention is clear; “Rather, clothe yourselves with the Lord Jesus Christ, and do not think about how to gratify the desires of the sinful nature.” Romans 13:14

Just as pet lovers in my ‘hood have to take extra precautions, there are things we can all do to prevent the destructive powers of skewed thinking. Create a checklist and ask yourself these questions periodically:

Those questions (and others that come to mind) are the hardware you need to build a protective wall around your heart and mind. Preventing attacks is much wiser (and less painful) than treating a wounded life.

Any personal encounters with one of the natural enemies listed above? I’ve had plenty!

When the threat of death becomes a door to paradise the final barrier to temporal risk is broken. When a Christian says from the heart, “To live is Christ and to die is gain,” he is free to love no matter what. Some forms of radical Islam may entice martyr-murderers with similar dreams, but Christian hope is the power to love, not kill. Christian hope produces life-givers, not life-takers. The crucified Christ calls his people to live and die for their enemies, as he did. The only risks permitted by Christ are the perils of love. “Love your enemies, do good to those who hate you, bless those who curse you, pray for those who abuse you” (Luke 6:27-28).

With staggering promises of everlasting joy, Jesus unleashed a movement of radical, loving risk-takers. “You will be delivered up even by parents . . . and some of you they will put to death” (Luke 21:16). Only some. Which means it might be you and it might not. That’s what risk means. It is not risky to shoot yourself in the head. The outcome is certain. It is risky to serve Christ in a war zone. You might get shot. You might not.

Christ calls us to take risks for kingdom purposes. Almost every message of American consumerism says the opposite: Maximize comfort and security – now, not in heaven. Christ does not join that chorus. To every timid saint, wavering on the edge of some dangerous gospel venture, he says, “Fear not, you can only be killed” (Luke 12:4). Yes, by all means maximize your joy! How? For the sake of love, risk being reviled and persecuted and lied about, “for your reward is great in heaven” (Matthew 5:11-12).

There is a great biblical legacy of loving risk-takers. Joab, facing the Syrians on one side and the Ammonites on the other, said to his brother Abishai, “Let us be courageous for our people . . . and may the LORD do what seems good to him” (2 Samuel 10:12). Esther broke the royal law to save her people and said, “If I perish, I perish” (Esther 4:16). Shadrach and his comrades refused to bow down to the king’s idol and said, “Our God whom we serve is able to deliver us . . . But if not, be it known to you, O king, that we will not serve your gods” (Daniel 3:16-18). And when the Holy Spirit told Paul that in every city imprisonment and afflictions await him, he said, “I do not account my life of any value nor as precious to myself, if only I may finish my course” (Acts 20:24).

“Every Christian,” said Stephen Neil about the early church, “knew that sooner or later he might have to testify to his faith at the cost of his life” (A History of Christian Missions, Penguin, 1964, p. 43). This was normal. To become a Christian was to risk your life. Tens of thousands did it. Why? Because to do it was to gain Christ, and not to was to lose your soul. “Whoever would save his life will lose it, but whoever loses his life for my sake will find it” (Matthew 16:25).

In America and around the world the price of being a real Christian is rising. Things are getting back to normal in “this present evil age.” Increasingly 2 Timothy 3:12 will make sense: “All who desire to live a godly life in Christ Jesus will be persecuted.” Those who’ve made gospel-risk a voluntary life-style will be most ready when we have no choice. Therefore I urge you, in the words of the early church, “Let us go to him outside the camp and bear the reproach he endured. For here we have no lasting city, but we seek the city that is to come” (Hebrews 13:13-14).

When God removed all risk above
He loosed a thousand risks of love.

The field is the world, and the good seed is the sons of the kingdom. – Matthew 13:38 ESV

Matthias Claudius was the son of a Lutheran pastor. After studying theology, he turned his attention to law and languages. Born in 1740 in northern Germany, he loved to write and in 1768, he joined the Hamburg News Agency, first as a writer, then as an editor. He was so influential that he became known as the father of popular German journalism.

In 1782, he heard farmers singing a song that expressed their faith in God and thankfulness for His blessings. Claudius copied the words, which he developed into a hymn. In 1861, Jane Campbell translated the words into English with the title “We Plow the Fields.” These farmers realized that they could “plow the fields, and scatter the good seed,” but they depended on God to feed and water the seed. Claudius, like these farmers, knew that “all good gifts around us are sent from heaven above” and that God alone “is the Maker of all things.”

We see His hand everywhere as “He paints the wayside flower” and “lights the evening star.” We trust Him for we are “His children” and “He gives our daily bread.” Particularly during harvest time, we can marvel at the ways He provides. We see that everything is from Him. Claudius prayed that we would offer Him what He most desires, “our humble, thankful hearts.”

Think about all that God has done for you. Thank Him and show your gratitude by bringing Him your offerings.

There is a legend that tells of a German baron who, at his castle on the Rhine, stretched wires from tower to tower, that the winds might convert them into an Aeolian harp. And the soft breezes played about the castle, but no music was born.

But one night there arose a great tempest, and hill and castle were smitten by the fury of the mighty winds. The baron went to the threshold to look out upon the terror of the storm, and the Aeolian harp was filling the air with strains that rang out even above the clamor of the tempest. It needed the tempest to bring out the music!

And have we not known men whose lives have not given out any entrancing music in the day of a calm prosperity, but who, when the tempest drove against them have astonished their fellows by the power and strength of their music?

“Rain, rain
Beating against the pane!
How endlessly it pours
Out of doors
From the blackened sky
I wonder why!
Flowers, flowers,
Upspringing after showers,
Blossoming fresh and fair,
Everywhere!
Ah, God has explained
Why it rained!”

You can always count on God to make the “afterward” of difficulties, if rightly overcome, a thousand times richer and fairer than the forward. “No chastening… seemeth joyous, nevertheless afterward…” What a yield